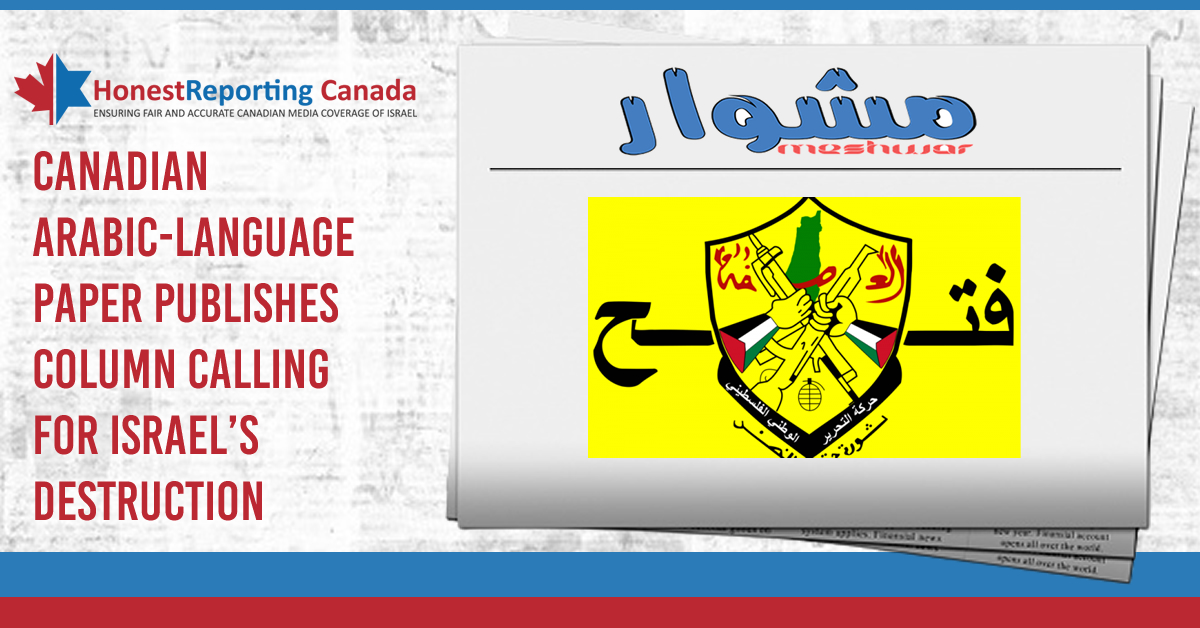 In a recent December 31 column in Meshwar Media, an Arabic-language publication that has been accused of antisemitism and of publishing blood libels, praising terrorists and comparing Israelis to Nazis, Kamal Khalaf extols the virtues of the Palestinian “revolution” in the 1960s, when Yasser Arafat of the Palestine Liberation Organization achieved widespread international legitimacy in his terror war against Israel.

While Arafat was not successful in his attempts to destroy Israel, Khalaf praises Palestinian terror groups Islamic Jihad and Hamas, which has claimed the lives of hundreds of Israeli civilians in murderous terrorist attacks. “In Gaza, the Al-Qassam Brigades defend the defenseless and besieged people, with all their capabilities,” Khalaf writes. (HRC received an independent expert translation of this column).

One of the most horrific attacks carried out by the Al-Qassam Brigades was in 2002, when a suicide bomber affiliated with Hamas entered a Tel Aviv discotheque popular with teenagers, and blew himself up, murdering 21 young Israelis, whose only crime was being Jewish.

Not content to merely murder the young, Hamas also sent a suicide bomber to the Park Hotel in the Israeli city of Netanya to target a Passover seder of predominantly older Israelis. The bomber entered, blew himself up, and massacred 30 civilians.

These are two out of countless terrorist attacks which Hamas has perpetrated against Israelis.

As appalling as Khalaf’s advocacy for Hamas is, he offers us an insight into why Israel is so hated in his eyes: Israel’s creation, he argues, was based on “assembling peoples and gangs under the banner of religion to replace a people on their land.”

In 1948, the Jewish People achieved independence from the United Kingdom in their quest for self-determination, an accomplishment which every progressive voice in the world should laud as a template for other groups to emulate.

Of course, when one denies the Jewish People’s historic ties to their homeland, it is no surprise then when the State of Israel is seen as utterly illegitimate. And when this abhorrent historical revisionism takes place, destroying all of Israel becomes a moral necessity.

As Khalaf continues (emphasis added): “We must actually start working to end the project of the state of Israel on Palestinian land, and build our historic national home one every inch of it.” In essence, Khalaf is tacitly proposing the active destruction of Israel, the world’s only Jewish State. Although he does pay lip service to the idea that Jews would be allowed to exist under a future Palestinian state, the incessant antisemitic incitement from both Hamas and the Palestinian Authority (PA) suggests that any Jews who would find themselves unfortunate enough to be living in a Palestinian state would be living in grave danger. In order to deflect criticism, Khalaf also writes that Jews are part of the Palestinian people and that they too will live in a democratic, modern and free Palestinian state.

Taken alone, Khalaf’s statement of support for Hamas, and his implicit call for the destruction of Israel may seem like two disparate statements – but they are not. When the Jewish People’s history is erased from their homeland, Israel becomes delegitimized. And when that happens, it becomes acceptable to take any actions – including murdering civilians – to achieve that end.

And that is exactly what Khalaf is proposing, albeit in flowery language. In just the last century alone, when tyrants made threats to decimate the Jewish People, their rhetoric were often followed by action. That is precisely why Khalaf’s words aren’t simply a difference of opinion, but speech which fans the flames of hatred against not just Israelis, but any Jew.

As the largest target for religiously motivated hate crimes in the country according to Statistics Canada, Canadian Jews know all too well that incitement far too often begets, or at the very least enables, antisemitic actions. It is for this reason that Khalaf’s words and Meshwar’s publication of his screed, should be universally condemned.