Memo to Toronto Star: Iran has Called for Israel to be "Wiped From the Map"

On March 31, the Toronto Star issued the following correction about the alleged mistranslation of former Iranian president Mahmoud’s Ahmadinejad’s comments regarding a claim that he called for Israel to be “wiped off the map”: 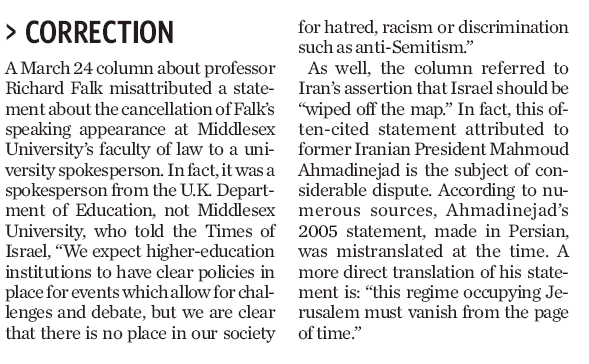 The correction was issued in regards to a March 23 column authored by Rosie DiManno entitled “Evangelist for anti-semitism strikes again” where she stated the following (emphasis added):

“Yet only Israel, from among the 193 member nations of the UN, regularly has its very right to be challenged, with at least one country, Iran, asserting Israel should be “wiped off the map”. Israel, which has been the subject of more than 300 country-specific resolutions by the General Assembly since it was founded. Israel, the sole country that has faced an examination of its human rights record at every one of the UN Human Rights Council’s sessions — which is why the U.S. boycotted the session that ends this week.”

Importantly, Ms. DiManno did not specifically refer to the disputed Ahmadinejad statement, so why was the correction issued at all? One thing is for certain, there is no dispute about the fact that Iran (vis-a-vis the statements of its leaders and military) has unequivocally called for Israel to be “wiped off the map”, either in these exact words or others. This is of serious importance as these statements are violations of international law under the Genocide Convention, says Irwin Cotler.

Cotler wrote in 2012 the following:

“The Iranian regime’s criminal incitement has been persistent, pervasive and pernicious. The 21st century began with Iranian Supreme Leader Ali Khamenei calling for “the annihilation of the Jewish State.” It was followed by the parading in the streets of Tehran of a Shihab-3 missile draped in the emblem “Wipe Israel off the map, as the Imam says.” It has continued with the use of epidemiological metaphors referring to Jews as “filthy bacteria,” and Israel as “a cancer that must be removed,” reminiscent of the Nazis calling the Jews “vermin” and the Rwandan Hutus calling the Tutsis “cockroaches,” the whole as prologue to and justification for a genocide foretold.

In particular, this genocidal incitement has intensified and escalated in 2012, with the website of Supreme Leader Ali Khamenei declaring that there is religious “justification to kill all the Jews and annihilate Israel, and Iran must take the helm.” Former Spanish prime minister José Maria Aznar disclosed in May that the Supreme Leader of Iran warned him that Israel was a “cancer” and must be “burned to the ground and made to disappear from the face of the Earth.” Several days later, the Chief of Staff of the Iranian Armed Forces, Major General Hassan Firouzabadi, declared: “The Iranian nation is standing for its cause — that is the full annihilation of Israel,” implicating unfairly the people of Iran.” 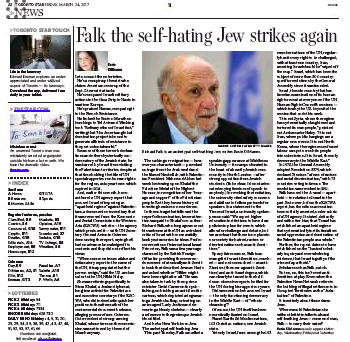 In light of this information, we told the Toronto Star’s Public Editor, Kathy English, that their own correction deserved to be clarified for the record. Regrettably, Ms. English’s only response to our organization was the following: “I do not think any further action is called for in this situation. This was clarifying a specific statement from 2005 that has subsequently been corrected by many news organizations.”

To repeat, Ms. DiManno did not herself refer to the disputed 2005 alleged statement by Ahmadinejad about “wiping Israel from the map”. Irrespective, there’s no denying that Iran’s leaders and military have indeed called for Israel to be “wiped off the map.” That cannot be denied.