Israel Is An Imperfect Country, But A Vibrant...
Why Are Anti-Israel Activists So Afraid of The...
McGill Tribune Publishes Op-Ed Calling for a Boycott...
Ontario Arabic Paper’s Editor Downplays Holocaust; Meshwar Describes...
How the War in Ukraine is Having a...
Toronto Star Columnist Shree Paradkar Wrongly Claims IHRA...
After Vancouver Adopts IHRA, CBC Radio Interviews Fringe...
Qatar Prepares For The 2022 World Cup: Will...
Lawfare: Who is Using the Law More Effectively?...
Official Publication of the College of Physicians and...
Home Media Action Alerts2022 Media Must Spotlight Rising Gazan Opposition To Hamas Says HRC In The Suburban 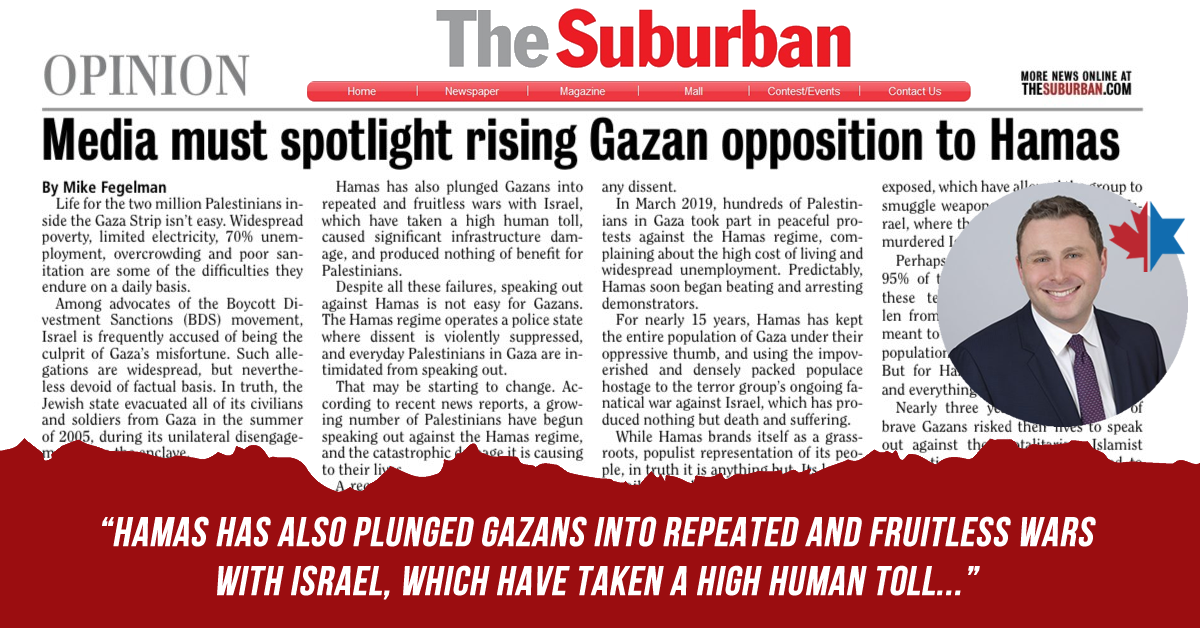 In Montreal’s The Suburban newspaper on February 16, HonestReporting Canada commented on how the vast majority of Gazans are poor, and living in densely populated areas, under the oppressive thumb of the Hamas regime. And now, they may be finally speaking out – at great personal risk – against Hamas. This movement, called They Kidnapped Gaza, is spreading on social media, but will the Canadian media tell their story and show the true face of Hamas?

Read our full commentary below.

Life for the two million Palestinians inside the Gaza Strip isn’t easy. Widespread poverty, limited electricity, 70% unemployment, overcrowding and poor sanitation are some of the difficulties they endure on a daily basis.

Among advocates of the Boycott Divestment Sanctions (BDS) movement, Israel is frequently accused of being the culprit of Gaza’s misfortune. Such allegations are widespread, but nevertheless devoid of factual basis. In truth, the Jewish state evacuated all of its civilians and soldiers from Gaza in the summer of 2005, during its unilateral disengagement from the enclave.

For the last 15 years, Gaza has been ruled by Hamas, the Islamist terrorist group who became globally known in the 1990s and 2000s for their horrific suicide bombing campaigns in Israel, which took the lives of countless civilians in restaurants, buses, stores and discotheques.

Hamas law dictates how women must dress and act in society, and even requires that they have a male escort in public. Hamas has executed homosexuals and anyone even suspected of daring to collaborate with Israel, the hated liberal democracy next door, which provides most of Gaza’s electricity.

Hamas has also plunged Gazans into repeated and fruitless wars with Israel, which have taken a high human toll, caused significant infrastructure damage, and produced nothing of benefit for Palestinians.

Despite all these failures, speaking out against Hamas is not easy for Gazans. The Hamas regime operates a police state where dissent is violently suppressed, and everyday Palestinians in Gaza are intimidated from speaking out.

That may be starting to change. According to recent news reports, a growing number of Palestinians have begun speaking out against the Hamas regime, and the catastrophic damage it is causing to their lives.

“We see the buildings rising in the northern Gaza Strip, the investments, the high-rises. We all see it. You can’t close your eyes to it… We all know that you’re swimming in corruption,” one commentator named Jehad said during an event on social media.

Hamas has shown little tolerance for any dissent.

In March 2019, hundreds of Palestinians in Gaza took part in peaceful protests against the Hamas regime, complaining about the high cost of living and widespread unemployment. Predictably, Hamas soon began beating and arresting demonstrators.

For nearly 15 years, Hamas has kept the entire population of Gaza under their oppressive thumb, and using the impoverished and densely packed populace hostage to the terror group’s ongoing fanatical war against Israel, which has produced nothing but death and suffering.

While Hamas brands itself as a grassroots, populist representation of its people, in truth it is anything but. Its leader, Ismail Haniyeh, lives an opulent lifestyle in safe haven Qatar, along with Khaled Mashaal, Hamas’s diaspora director, far from the suffering and travails of the people they purport to represent.

And Hamas, the recipient of significant international aid, primarily from Islamic countries (most notably Iran and Qatar), continues to funnel vast sums not towards the wellbeing of everyday Gazans, but towards developing an arsenal to wage never-ending war on Israel.

In recent years, Hamas’ complex web of subterranean attack-tunnels have been exposed, which have allowed the group to smuggle weapons and terrorists into Israel, where they have wreaked havoc and murdered Israelis.

Perhaps most perversely, as much as 95% of the concrete used to construct these terror tunnels have been stolen from incoming concrete deliveries, meant to assist the enclave’s burgeoning population with critical infrastructure. But for Hamas, terrorism comes first, and everything else is a distant second.

Nearly three years ago, hundreds of brave Gazans risked their lives to speak out against their totalitarian, Islamist theocratic regime. While they failed to unseat Hamas, they laid the groundwork for future protests. And now, with the new social media protests against Hamas, it is time for the Canadian media to report on these developments, and shine a light on the horrific conditions which Hamas has been subjecting its people to for far too long.