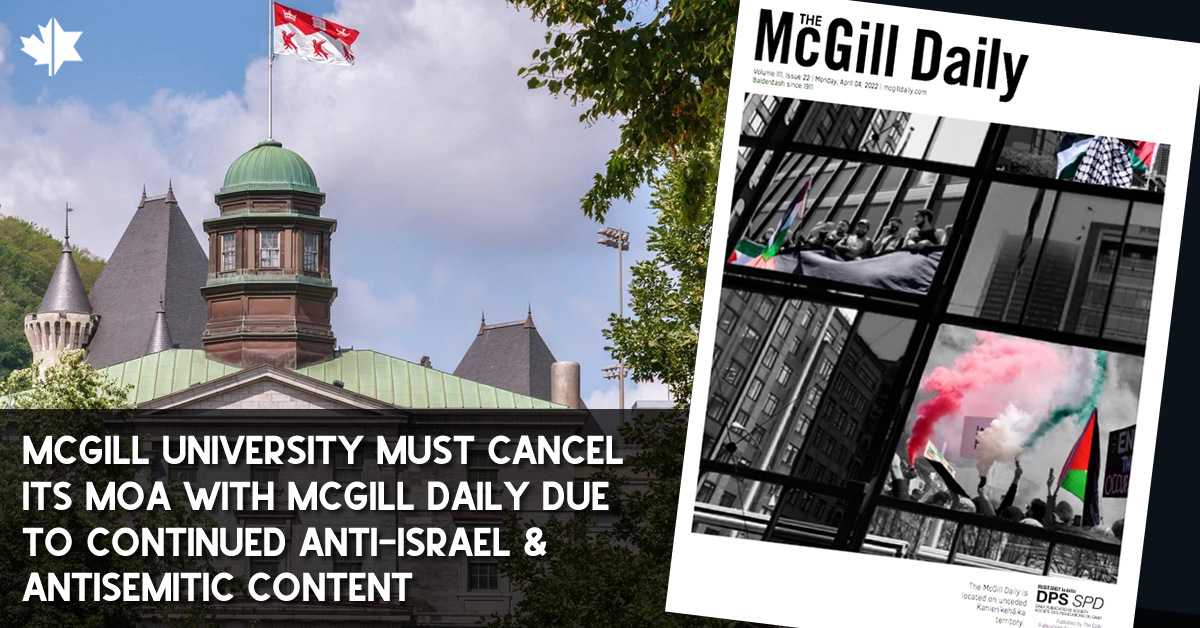 Less than two weeks ago, an anti-Israel resolution put forward by the Students’ Society of McGill University (SSMU) was passed, which called for the boycott of organizations “complicit in settler-colonial apartheid against Palestinians” and a semi-regular commemoration of Nakba Day, mourning (not celebrating) Israel’s independence in 1948.

Shortly thereafter, McGill University’s threatened to suspend its Memorandum of Agreement (MOA) with the student union as a result of the group’s anti-Israel agenda.

Lest Jewish and pro-Israel students on campus see their official student union as being the primary anti-Israel organization on campus, the McGill Daily is providing stiff competition.

The McGill Daily, an independent student newspaper at Montreal’s McGill University, was launched in 1911 and calls itself an “alternative media outlet.” 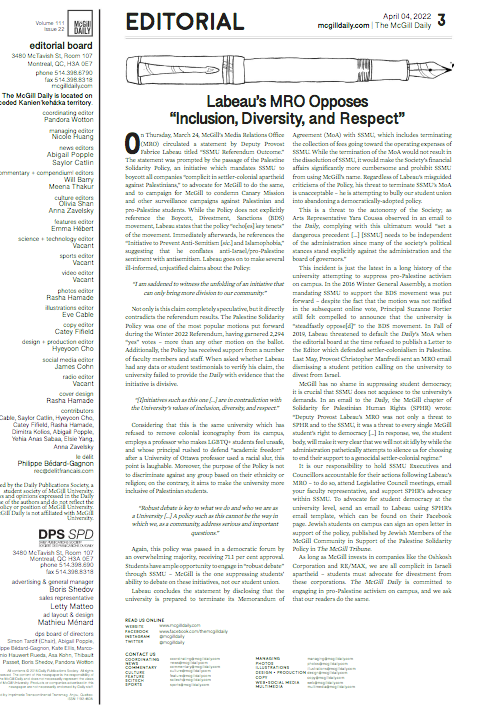 The April 4 lead editorial, “Labeau’s MRO Opposes ‘inclusion, diversity and respect’” attacks the university administration for its opposition to the recent resolution and its threat to take action against the student union, and does so with an array of anti-Israel talking points and a complete whitewashing of the recent SSMU resolution.

Arguing that until boycotts of Israel-affiliated companies are instituted, “we are all complicit in Israeli apartheid,” the McGill Daily editorial also attempted to position the recent SSMU resolution as being passed by an “overwhelming majority” when fewer than 10 percent of eligible students voted in favour.

Even more problematic, however, was the editorial’s portrayal of the recent resolution as a fight to “make the university more inclusive of Palestinian students.” This is simply nonsense. The SSMU resolution would do nothing to benefit any Palestinians, but would only serve to demonize Israel and anyone connected to it.

But the McGill Daily’s revisionist editorial is more than simply factually and morally wrong, it is also a clear violation of the newspaper’s MOA with McGill University. The agreement between the University and the Daily Publications Society Inc. (the newspaper’s publisher), requires the McGill Daily to “adhere to the ethics guide of the Conseil de presse du Quebec (Quebec Press Council), and respect any adjudication of that organization.”

The Quebec Press Council’s Guide of Journalistic Ethics, meanwhile, calls for journalists in the province to not “let their commercial, political, ideological or other interests outweigh the public’s right to information of quality.”

The Daily’s editorial calls on readers to use a template written by the McGill chapter of Solidarity for Palestinian Human Rights (SPHR), to express their displeasure with the university administration, falsely portraying the SSMU resolution as making the university “more inclusive of Palestinian students,” and stating that “As long as McGill invests in companies like the Oshkosh Corporation and RE/MAX, we are all complicit in Israeli apartheid – students must advocate for divestment from these corporations. The McGill Daily is committed to engaging in pro-Palestine activism on campus; we ask that our readers do the same.”

In so doing, the Daily is blatantly violating the Quebec Press Council’s ethical guidelines, and in turn, its formal agreement with McGill University. (The Daily has previously acknowledged that SPHR helps create its anti-Israel content and that they work together.)

This editorial position is not by happenstance; their Editorial Board has previously defended its “explicitly Pro-Palestine stance,” saying to a pro-Israel student that it refuses to “publish work that includes the characterization of some forms of Palestinian resistance as terrorism or extremism.” Make no mistake, the Daily fundamentally lacks objectivity, journalistic neutrality, and it engages in partisan anti-Israel activism.

Beyond the lead editorial, The McGill Daily’s April 4 edition featured a plethora of anti-Israel misinformation and antisemitic content. 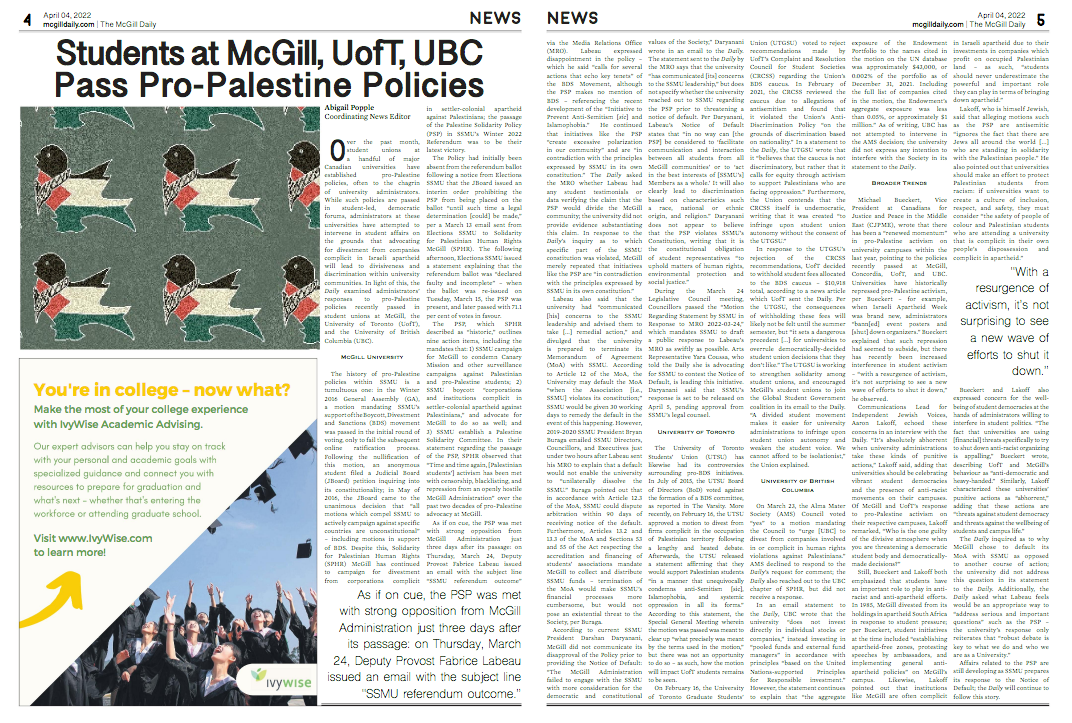 An interview by Yehia Anas Sabaa quotes an anti-Israel activist, Amir Marshi, saying that “Zionism is part of racism,” an outrageous antisemitic trope, and one which the Daily has uttered previously, and then baselessly claims that Theodore “Herzl himself was antisemitic” and that “Zionists allied themselves with Nazis in the past.” 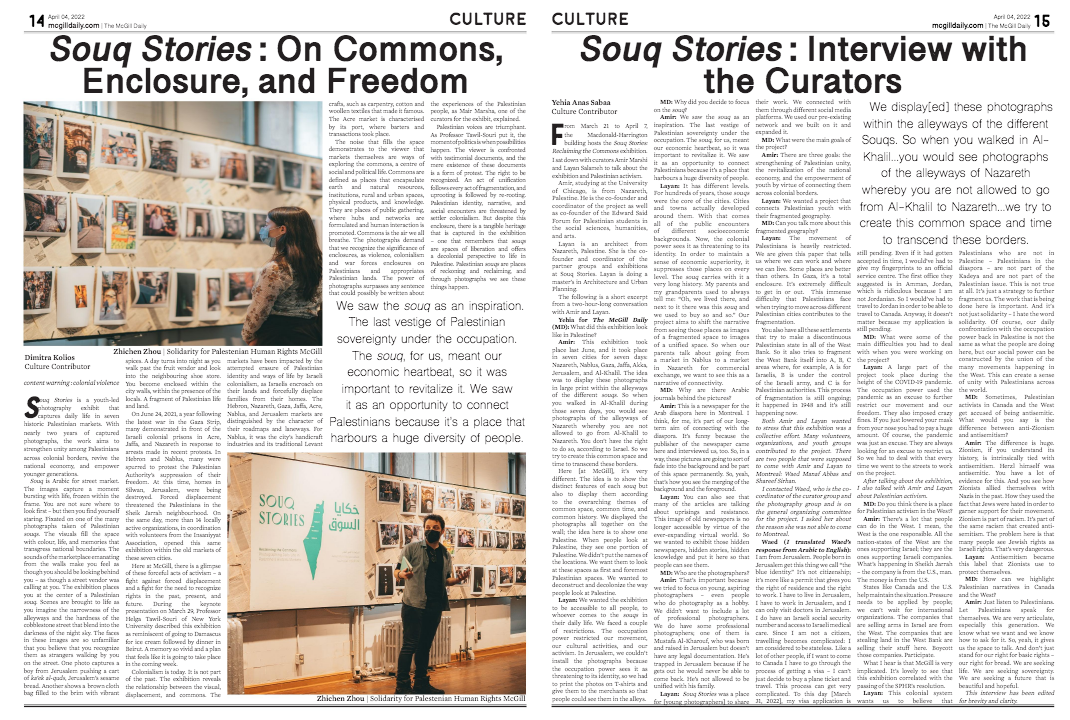 One letter (online only) entitled “Defending Palestinian rights is against McGill’s standards,” saw anti-Israel activist Ehab Latoyef outrageously claim that the university “bowed to Zionist pressure” for fear of not “disappoint(ing) the Zionist lobby.” Another column entitled: “On Commons, Enclosure, and Freedom,” by Dimitra Kolios, absurdly accused Israel of “colonialism” despite the Jewish people’s three thousand years of history in their ancestral homeland, and another entitled: “Interview with the Curators,” by Yehia Anas Sabaa, erroneously referred to the Israeli city of Nazareth as a city in the non-existent state of Palestine. 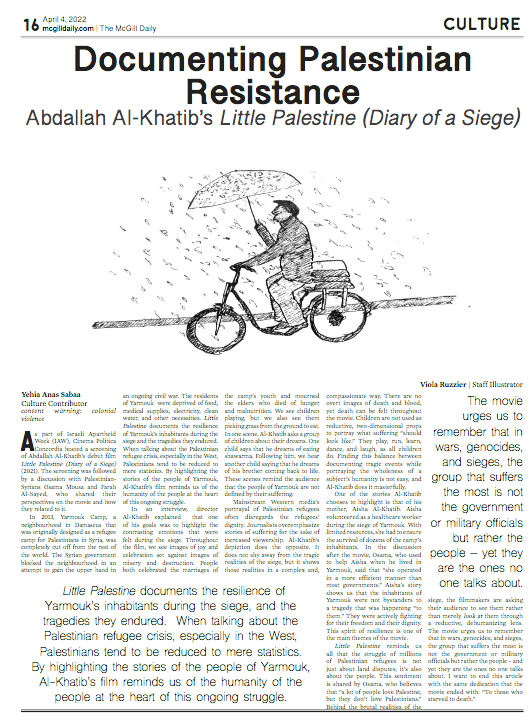 HonestReporting Canada recently, the newspaper has spread anti-Israel misinformation related to the SSMU resolution, and it has a long history of abusing its influence to peddle propaganda, including its previously engaging in discrimination by banning pro-Zionist commentaries.

All students, regardless of their politics or views of the Middle East, are being grossly unserved by the anti-Israel ravings of The McGill Daily. Student media has a valuable role to play in informing and educating members of the student body, and even challenging students to think differently about the world around them. But The McGill Daily is not doing that. Rather, it’s falling into its old trap of simply rehashing tired disinformation about Israel, discriminating against the Jewish people, and defending student union resolutions which deny the Jewish people the right to self-determination, a right to their own state in their ancestral homeland.