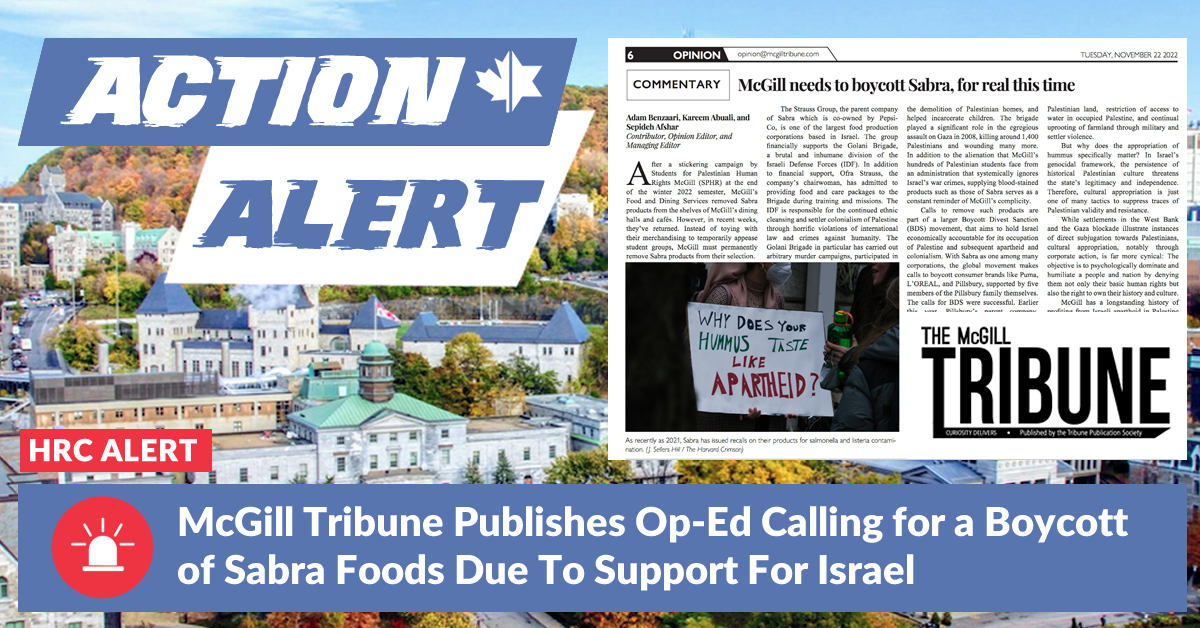 As a growing number of Arab countries establish diplomatic ties with Israel – not just Bahrain and the United Arab Emirates (UAE), Morocco, and Sudan, but recently, the Gulf state of Oman has opened the door to important steps in normalization – the Jewish State has never before enjoyed such widespread acceptance around the world, and in the Middle East in particular.

Despite this real-world progress, a small, but loud cacophony of voices, despite all momentum against them, continue to attempt to demonize Israel and call for boycotts against the country.

In a November 22 opinion article in The McGill Tribune entitled: “McGill needs to boycott Sabra—for real this time,” authors Adam Benzaari, Kareem Abuali, and Sepideh Afshar call on McGill University’s administration to ban Sabra food products from the university campus. Sabra is a well-known manufacturer of hummus and other dips.

Nevertheless, the authors maintain that the Strauss Group’s affiliations with Israel are enough to warrant a boycott, citing the company’s support in creating care packages for Israeli soldiers – a connection that the New York Times described as “not particularly direct.”

In general, the charges made by the three authors are nothing new: claims of “continued ethnic cleansing and settler colonialism,” as well as “crimes against humanity” allegedly committed by Israel.

These allegations are not now, nor have they ever been, anything close to resembling the truth.

To characterize Israel as committing “ethnic cleansing and settler colonialism” is manifestly ridiculous. Even according to the Palestinian Authority’s own official documentation, the population of Palestinians living in Israel and the Palestinian territories has grown more than five-fold from 1948 until 2020, making the claim of ethnic cleansing utterly laughable in its absurdity.

As for the term “settler colonialism,” while it has become an increasingly popular phrase used by anti-Israel activists, it is similarly meaningless. Israel is not the Jewish nation-state by accident. It is where the Jewish People and their ancestors have lived for three thousand years. Jewish prophets and kings have walked the land of Israel, and it’s where the Jewish people have strived for and fought for self-determination.

Israel is where the Jewish People – in a supreme act of anti-colonialism – regained their ancient homeland, rebuilt their ancient capital city of Jerusalem, and started anew their country, after centuries of occupation by invading foreign forces. Thus, Israel is not only unmistakably not a settler-colonialist enterprise; it represents the exact opposite: indigenous.

In their column, Benzaari, Abuali, and Afshar rely on more than just historical revisionism to make their point; they also allege that Israelis – seemingly with the crime of eating and manufacturing hummus – represent part of a larger “project to erase Palestinian culture and history.” 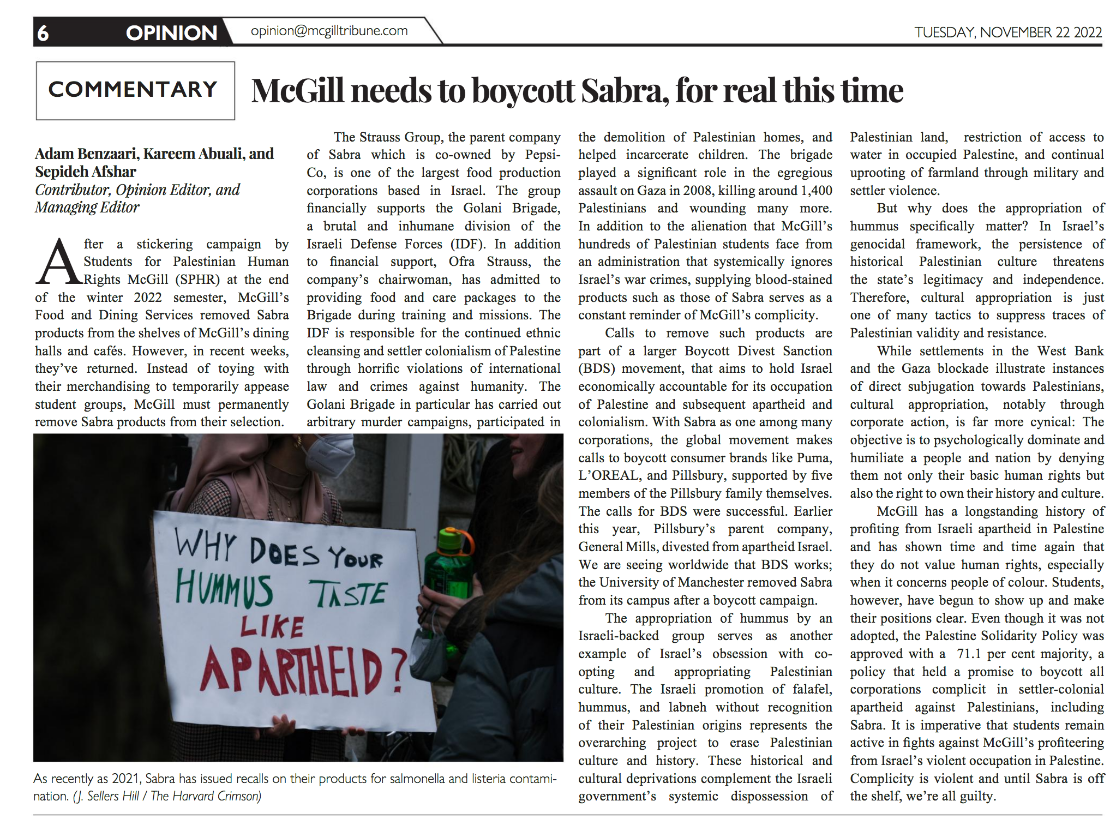 Such outlandish claims only reflect the straws upon which the three authors are grasping. Hummus is not a Palestinian food any more than it is a modern Israeli food. It has been eaten for centuries, perhaps even millennia, and may not even originate from the Middle East at all.

Benzaari, Abuali, and Afshar, in attempting to promote McGill University’s boycott of Sabra, point to other supposed successes of the anti-Israel boycott movement, including General Mills, who they state “divested from apartheid Israel,” and the adoption of the Palestine Solidarity Policy by a “71.1 percent majority” of McGill University students.

Unsurprisingly, the truth is in fact quite different.

“General Mills is committed to continuing to serve the Israel market,” the company stated unambiguously on its website in August 2022, showing that Israel is far from the pariah state that the column’s authors are intending to portray it as.

As for the supposed popularity of the Palestinian Solidarity Policy, a proposal that was voted on by McGill University students in the spring of 2022, it attracted only the support of fewer than 10 percent of eligible students at the school, suggesting that for the vast majority of pupils, the repeated squawking by anti-Israel activists of alleged Israeli crimes have fallen on deaf ears.

The McGill Tribune, by publishing this column, has continued on a very familiar tradition of sharing nonsensical and groundless anti-Israel disinformation, including how it recently gave a platform to an anti-Israel group on campus to spew the baseless antisemitic theory that “Zionist donors” control McGill University. Subsequent to complaints by HonestReporting Canada subscribers, a formal retraction and apology were issued by the Tribune.

McGill University is a well-respected institution of higher learning, but The McGill Tribune is repeatedly demonstrating that their newspaper is a blight on that otherwise bright reputation.