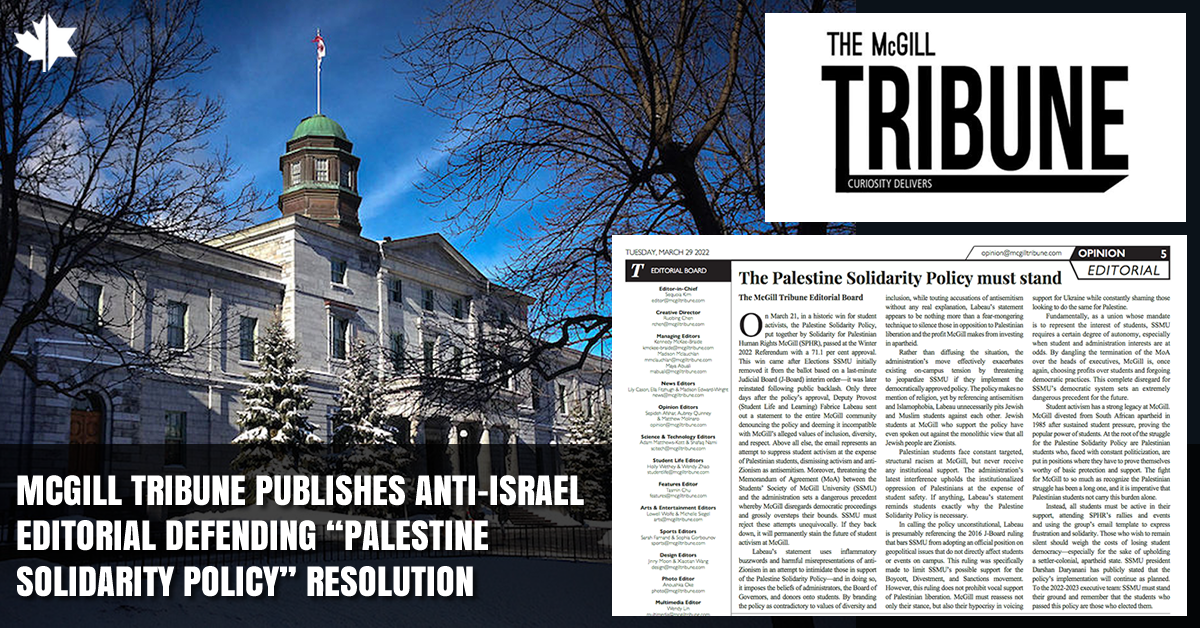 In an editorial published on March 29 entitled “The Palestine Solidarity Policy must stand,” the Editorial Board of The McGill Tribune newspaper defended a recent anti-Israel referendum held by McGill University’s student union, the Students Society of McGill University (SSMU).

The referendum called for, among other items, a boycott of companies associated with Israel’s alleged “settler-colonial apartheid,” and a pro-Palestinian public statement to be made by the SSMU every semester, coinciding with “Nakba Day,” the Arabic term for “catastrophe”, referring to Israel’s establishment in 1948.

Calling the March 21 vote a “historic win,” the editorial took issue with the subsequent backlash from McGill University’s administration, which condemned the vote and called for “remedial action” to be taken by the student union.

Importantly, the Tribune’s editorial was rife with half-truths and outright falsehoods.

First, despite breathlessly referring to the vote as a “historic win” with more than 71 percent of the vote, the referendum was voted in favour of by fewer than 2,300 students – representing a tiny percentage of the nearly 24,000 eligible electors at McGill University. More fundamentally, the editorial condemned the university administration’s public statement, and claimed it “effectively exacerbates existing on-campus tension.” This statement is simply beyond parody. To the degree that there are tensions on campus related to the conflict between Israel and the Palestinians, it is in no small part as a result of anti-Israel misinformation.

The editorial accused the university of characterizing “anti-Zionism as antisemitism,” and defended the right of the student union to be anti-Zionist. It may come as a surprise to the editors of The McGill Tribune, but Zionism is nothing more than the quest for self-determination among the Jewish people in their ancestral homeland. Therefore, referring to Israel’s independence as a “catastrophe,” as the SSMU referendum did, is not merely a critique of Israeli government policy, but a complete denial of the Jewish people’s right to live in self-determination in their own homeland. 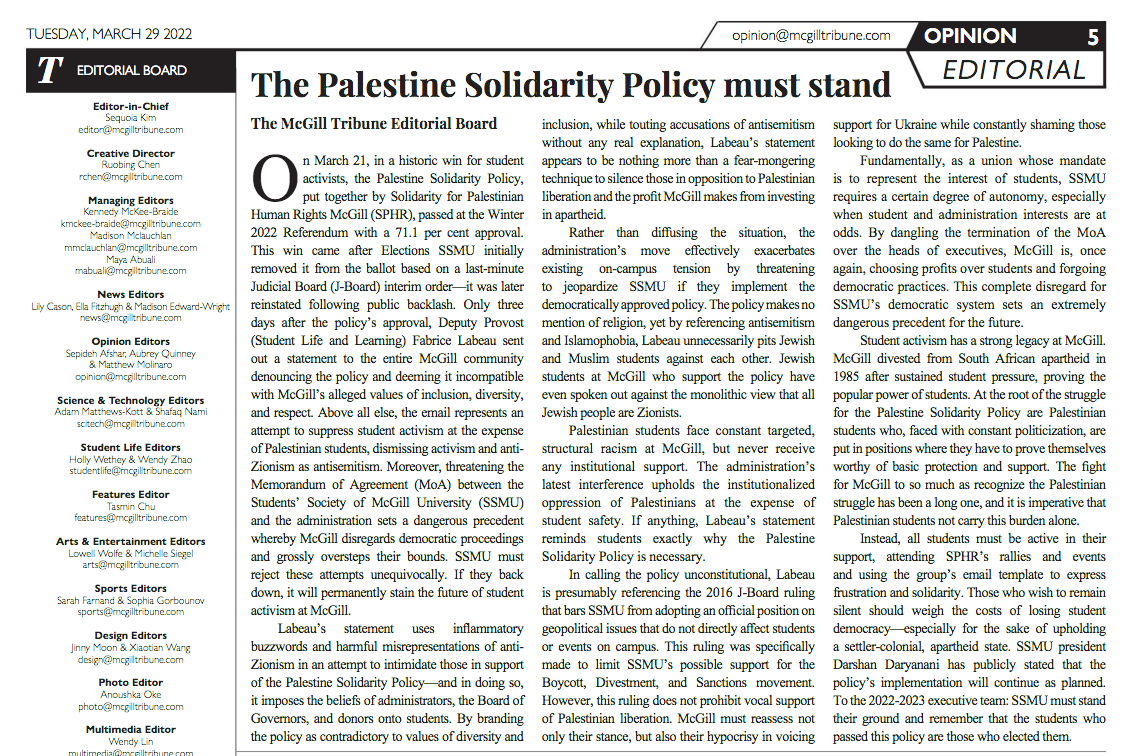 In fact, had the SSMU, or The McGill Tribune, consulted with mainstream Jewish voices, they would have learned that antisemitism is more than simply anti-Jewish statements or sentiment, but according to the International Holocaust Remembrance Alliance (IHRA), of which Canada is a signatory, denial of the Jewish people’s right to self-determination is absolutely antisemitic.

Also in the March 29 edition of The McGill Tribune, an opinion column by Shafaq Nami was published which used the war between Russia and Ukraine to justify the actions of Palestinian terrorists. As well, the Tribune published a column by the Solidarity for Palestinian Human Rights (SPHR) organization which characterized Israel as a “settler-colonial” oppressor of Palestinians. To refer to Israel as a “settler-colonial” oppressor is more than simply disinformation; it is obscenely false. Jews have continuously lived in their ancestral homeland for three thousand years, and despite manifold attempts by larger colonial powers such as Rome, Greece, Babylonians, and more throughout history to erase the Jewish presence, that Jews continued to survive and thrive in their ancient land. Not only does Israel therefore in no way resemble anything colonialist, it represents the polar opposite, de-colonizers.

The McGill Tribune has given platform to groundless anti-Israel claims before. This past January, HonestReporting Canada condemned the Tribune for accusing Israel of forcibly expelling 750,000 Arabs from their homes when the Jewish State gained its independence. As has been pointed out before, many of these refugees left precisely because the local Arab leadership – expecting a quick victory against the nascent Jewish State – encouraged Arabs to flee Israel, albeit temporarily.

By continuing to publish baseless anti-Israel content in its pages, The McGill Tribune does exactly what it is accusing the McGill University administration of doing: fomenting discord and sowing division throughout campus.

By peddling anti-Israel content, and by defending hateful resolutions on campus, The McGill Tribune is not only doing nothing to solve the existing tensions on campus, it is only serving to contribute to them. Take action now by sending registering your concerns – firmly, but politely – with The McGill Tribune. Send emails to: editor@mcgilltribune.com.