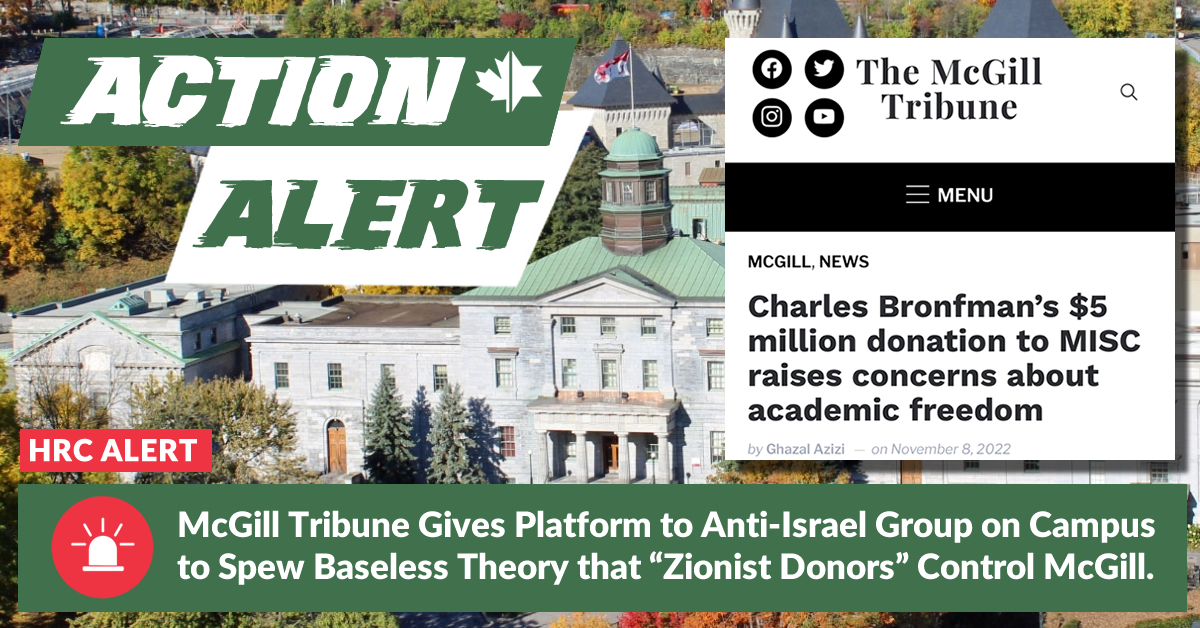 
The McGill Tribune has issued a partial retraction, acknowledging that including SPHR’s inflammatory language was a mistake and removed it from the article.

“The original version of the article below quoted Students for Palestinian Human Rights McGill (SPHR) about Charles Bronfman’s latest donation. A portion of the quote played into anti-Semitic stereotypes about Jewish people being “puppet masters” of institutional decisions—a trope that is both harmful and untrue. The Tribune apologizes for allowing this language to be published and deeply regrets any harm this caused to Jewish readers in the McGill community and beyond.”

While the Tribune’s issuing this retraction is a step in the right direction, it’s incumbent upon The McGill Tribune to ensure objective, fair and accurate reporting about matters relating to Israel and affecting Montreal’s Jewish community.

In late October, the McGill Institute for the Study of Canada (MISC) announced a five million dollar donation to the institute from billionaire philanthropist Charles Bronfman.

The gift will help launch a new initiative aimed at bringing Canada’s top minds together for discussions relating to the country’s economic, social & political future.

As if on cue, anti-Israel voices at McGill University are already complaining about the donation.

As reported in a November 8 article in the McGill Tribune newspaper, “Charles Bronfman’s $5 million donation to MISC raises concerns about academic freedom,” Solidarity for Palestinian Human Rights (SPHR) McGill is claiming that because Bronfman is a prominent pro-Israel philanthropist, his gift to the university surely must be tarnished as a result.

The article quotes a press release from SPHR which claims that “Accepting such large donations from so-called Zionist ‘philanthropists’ ensures that no pro-Palestine policy will ever be adopted at McGill University,” adding that it makes the school “puppets to their Zionist donors who can threaten to cut their funding anytime the word ‘Palestine’ is uttered on campus.”

As proof of its claim that shadowy “Zionist” money is somehow controlling the university administration, SPHR McGill cited in its press release the spring 2022 decision by the student government at McGill University, Students Society of McGill University (SSMU), to not adopt the anti-Israel “Palestine Solidarity Policy.”

The Palestine Solidarity Policy called on the SSMU to regularly engage in anti-Israel posturing on campus but was supported by fewer than 10 per cent of eligible students, showing that its lack of widespread popularity – not the puppet-controlling Zionist masters posited by the SPHR – caused its demise. As reported by HonestReporting Canada in June, the policy “contravenes official university policies and thus cannot be adopted by the student government at McGill University.”

Not only is SPHR’s critiques of Bronfman’s influence at McGill University unfounded, by claiming at the university administration are “puppets to their Zionist masters,” the group once again is engaging in classic antisemitic imagery and tropes, of a global Jewish conspiracy.

While SPHR’s recent tantrum over Charles Bronfman’s donation is troubling enough, equally bothersome is the very fact that it was given any coverage at all by The McGill Tribune. 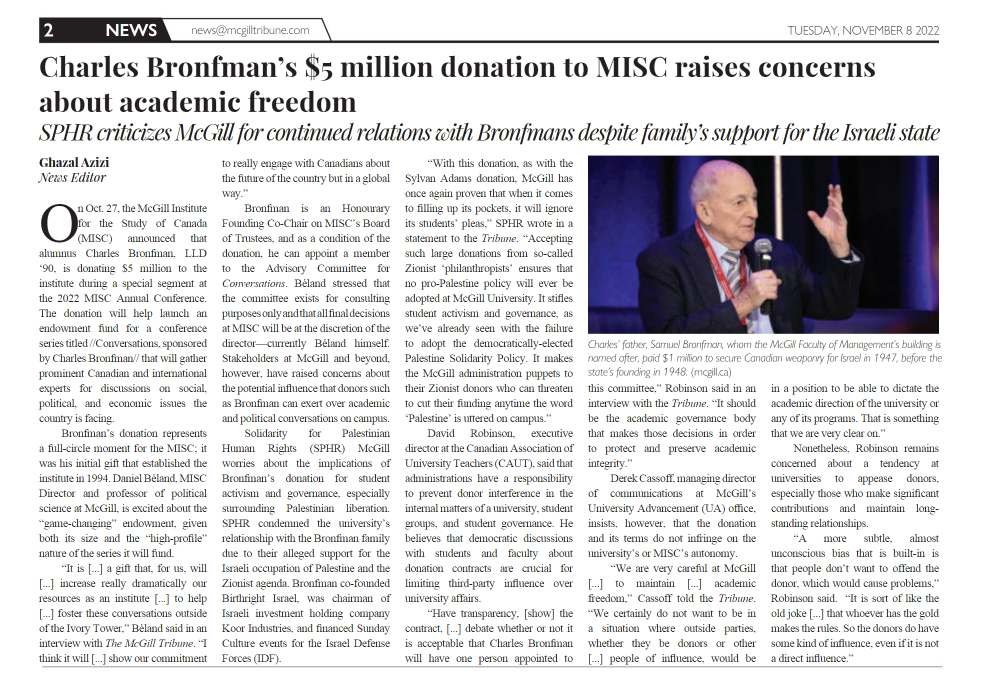 SPHR McGill has shown its utter failure to influence university policies to achieve its anti-Israel ends, and has become a fringe group on campus. Therefore, its sophomoric opposition to Bronfman’s donation merits neither attention nor news coverage.

The McGill Tribune, however, has shown a consistent track record, particularly in recent months, of amplifying SPHR McGill’s voice, and providing it with a platform to spew its nonsense with no critical context, including in its coverage of Bronfman’s gift, which phrased his background as showing “support for the Israeli occupation of Palestine and the Zionist agenda.”

In an attempt to give context to Bronfman’s history with McGill University, the newspaper stated that the McGill Faculty of Management’s building, named after Charles’ father Samuel, had made a donation in 1947 to help “Canadian weaponry for Israel in 1947, before the state’s founding in 1948.”

This statement is a complete non-sequitur. Samuel Bronfman was a noted philanthropist who supported many causes in Canada and elsewhere, and citing one example shows no undue control or influence at McGill University. Instead, it serves only to poison the entire Bronfman name by association with Israel.

In January, the newspaper published a lengthy oped from its Managing Editor who rattled off a long list of ridiculous anti-Israel claims, including that the Jewish State is a “settler-colonialist” state.

In May, the newspaper published an editorial calling on the university student union to pass the Palestine Solidarity Policy, which called for a boycott of any corporation affiliated with Israel’s apparent “settler-colonial apartheid,” and a pro-Palestinian public statement to be made by the SSMU every semester, coinciding with “Nakba Day,” which is the Arabic term for “catastrophe”, referring to Israel’s independence in 1948.

The McGill Tribune, by giving space to marginal anti-Israel groups like SPHR McGill, give such organizations undue attention, influence and credibility. The claim that a donation by a Jewish philanthropist who supports Israel is challenging the university’s moral compass is not only unmoored to reality, it is once again feeding oxygen to the age-old image of a widespread Jewish conspiracy to control the world.