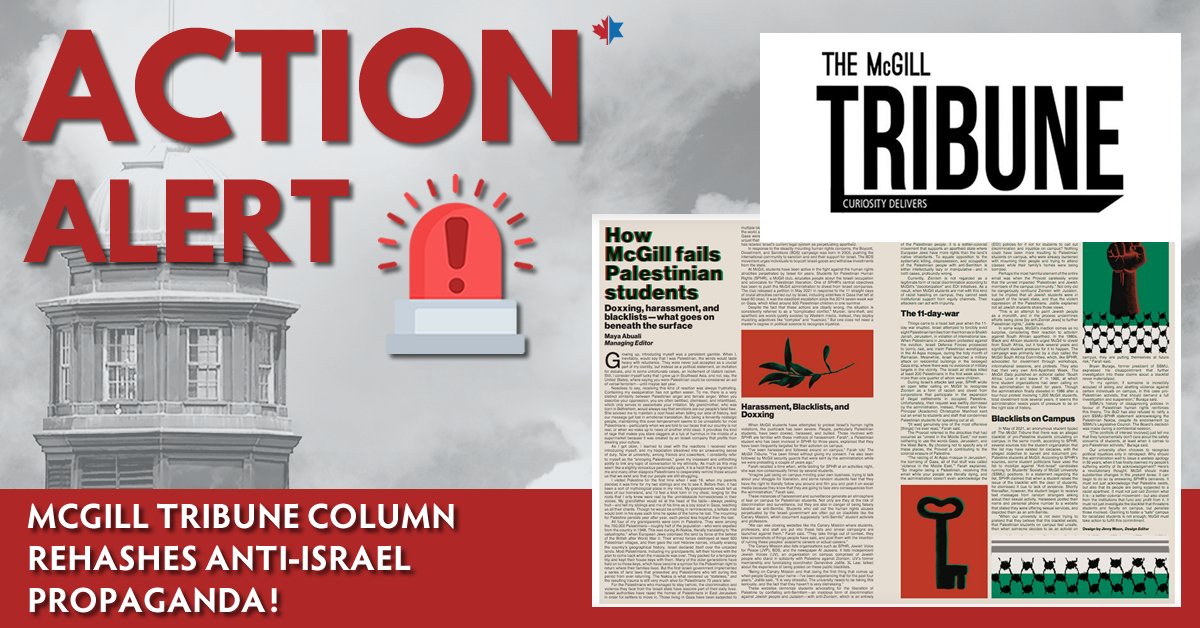 In a recent January 11 column in the McGill Tribune, “How McGill fails Palestinian students,” (pages 8 and 9) Managing Editor Maya Abuali describes her upbringing as a Palestinian growing up in Canada and her desire to educate peers about her background.

While Abuali certainly has the right to share her first-hand experiences as a Palestinian-Canadian, as well as her perspectives on the Israeli-Palestinian conflict, her column is rife with misinformation, outright fabrications, and utter historical revisionism.

For example, Abuali claims that “750,000 Palestinians …were expelled from the country in 1948…when European Jews colonized the land by force at the best of the British after World War II.”

While 750,000 Arabs who were living in pre-state Israel did leave the country after Israel declared independence, it was the Arab leaders who initiated it. A 1948 article in the Economist magazine reported that “the most potent of the factors were the announcements made over the air by the Higher Arab Executive, urging the Arabs to quit….It was clearly intimated that those Arabs who remained in Haifa and accepted Jewish protection would be regarded as renegades.”

It is also worth noting that blame for Israel’s War of Independence in 1948 lies squarely on the Arab countries who rejected partition and Israel’s right to exist, and thus declared war on the nascent Jewish state. Moments after Israel’s announcement of independence, it was attacked by neighbouring Arab states. 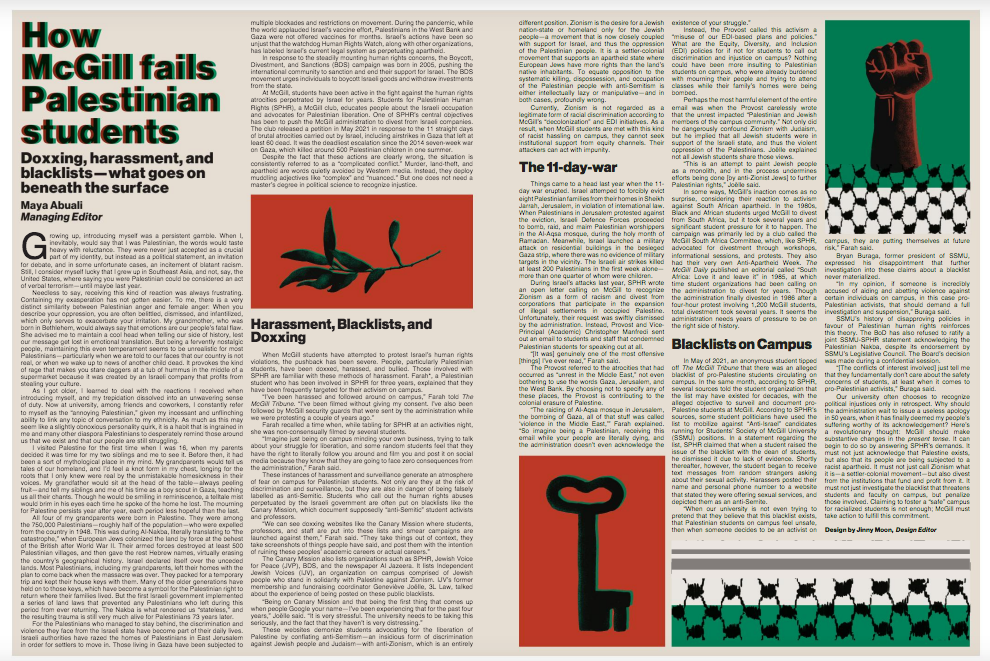 More importantly, it is obscenely false to claim that “European Jews colonized” Israel. A colonizer is a foreign interloper, and to claim Jews were such, beggars belief. For three thousand years, Jews have lived in the land of Israel, walking in the footsteps of their ancestors. Copious archaeological and other proofs attest to this indisputable fact. The Jewish People in 1948 reclaimed their indigenous homeland from the British, and to attempt and rewrite this reality is the height of insolence.

Furthermore, claiming the Jews who re-found their state were “European” is to ignore the over 800,000 Jews from Islamic lands, such as Iraq, Egypt and Syria, who were expelled from their homes by the Arab governments at the time the State of Israel achieved independence. Today, the majority of Israeli Jews have recent roots in the Middle East, not in Europe or anywhere else.

But Abuali’s historical revisionism continued down a much darker path. Not only does she attempt to erase three thousand years of Jewish history, but she depicts Zionism – which is the Jewish People’s desire for self-determination in their homeland – as a nefarious plot.

“Zionism is the desire for a Jewish nation-state or homeland only for the Jewish People…it is a settler-colonialist movement that supports an apartheid state where European Jews have more rights than the land’s native inhabitants,” Abuali writes.

It is difficult to overstate how truly asinine this accusation is. The majority of Israelis are Jewish, but it has a large Arab minority, which enjoys equal rights in all areas of the law. Israeli Arabs are judges, lawyers, doctors and legislators in Israel’s Knesset and thrive at the pinnacle of Israeli society. In fact, an Arab Islamist party, Ra’am, is a coalition partner in the current Israeli government. To call that system “apartheid” is not only historical revisionism, it is a classless insult to the true struggles under apartheid which South Africans endured for many years.

There are simply too many falsehoods in Abuali’s column to adequately address each one, and this tactic – baselessly accuse Israel of everything under the sun, and hope something sticks – has been a favourite practice of the anti-Israel cause in recent decades.

Fortunately, blaming Israel without evidence for the continued struggles of the Palestinians has finally begun to worn thin, especially among leaders in the Middle East.

Israel’s diplomatic and economic relations with Arab states, such as Bahrain, Morocco, the United Arab Emirates (UAE), Sudan, and others, are burgeoning. As the Arab world comes to realize that Israel’s Jews are neither foreign nor new to the region, and that the country isn’t disappearing, the only solution is to make peace.

Voices like Abuali’s – who seek to not only demonize Israel, but fundamentally to rob Jews of their ancient history – are doomed to fail, and ironically, the biggest victims of the obsessive anti-Israel cause are not Israelis, but the Palestinians. It is the Palestinians who are being encouraged to reject Israel’s existence, and to re-write history. But the Palestinians will never achieve independence of their own if they follow this self-destructive path being laid out for them by advocates like Abuali.

Take action now! Accusing Jews of being foreign colonizers, and Zionism of being akin to a racist endeavour serves to demonize Israel and erase the Jewish People’s three thousand years of history. McGill Tribune Managing Editor Maya Abuali made no attempt to be bound by history, facts or reality in any way. Send a complaint to the Tribune by clicking here and by sending emails to editor@mcgilltribune.com.