According to CIJA, “The Student’s Society of McGill University’s (SSMU) Board of Directors rejected a discriminatory motion by the SSMU’s Legislative Council that called for the resignation of Jordyn Wright, a Jewish student and SSMU councillor. The motion called for Ms. Wright’s resignation because she agreed to participate in a trip to Israel.”

McGill University has issued a strongly worded statement condemning the SSMU’s attempt to target a Jewish student and SSMU Councillor, Jordyn Wright, based on Jewish faith & identity and to ostracize her for planning to go on an organized trip to Israel.

Fabrice Labeau, Deputy Provost for Student Life and Learning at McGill, expressed the university’s concerns about the SSMU’s discriminatory motion, urging its Board of Directors not to ratify it. 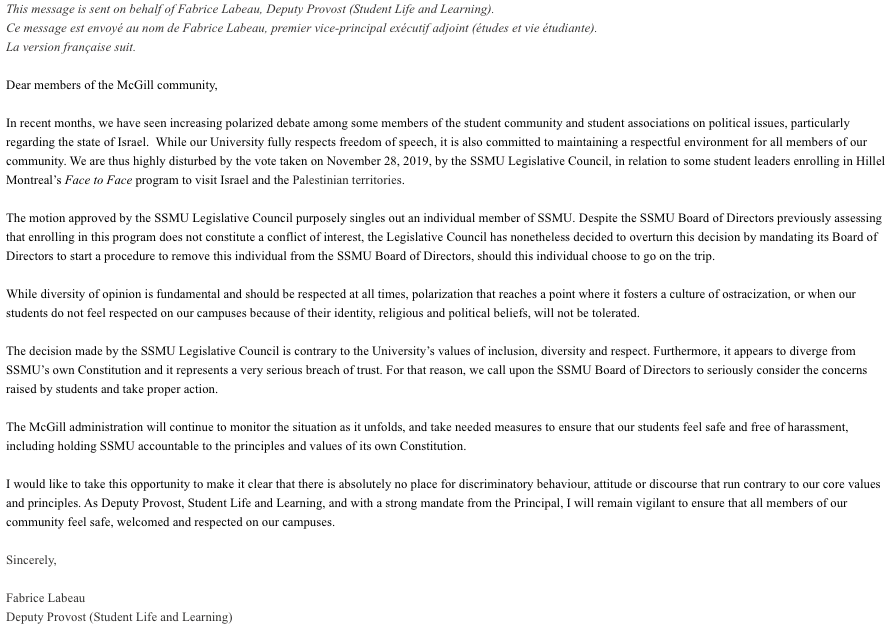 Here is the statement from the SSMU issued on December 3: “SSMU Statement On Discussions Around “Motion Regarding Free Trip Offers to Student Leaders”

This press release is being sent by the Students’ Society of McGill University (SSMU) Executive to restore nuance to a situation we fear has become sensationalized. It regards the offer of free trips to Israel/Palestine by Hillel Montreal to Councillors/Directors Adin Chan and Jordyn Wright, who sit on the SSMU Board of Directors as representatives of the SSMU Legislative Council.

First and foremost, we want to extend our deepest sympathies to Councillor/Director Wright. Though there has been much contention around the topic of the free trips being offered, the SSMU Executive team would like to reiterate that each member of the Society has the right and the responsibility to uphold a safe environment, and that this should be our absolute priority; personal attacks are unacceptable. In particular, no student at McGill should ever be made to feel unsafe because of who they are and the religion they follow. Ideas should be debated, but these debates should never feel as though an individual is being put on trial. The SSMU Executive commits to standing with Councillor/Director Wright against all antisemitic comments and forms of personal harassment.

It is also important to address the allegation that the SSMU President actively encouraged attacks against Councillor/Director Wright. We wish to make it clear that during last Thursday’s meeting, at no point did President Buraga advocate for any form of harm or harassment or any other action that could be construed as an attack. His amendments sought to make actionable the items of the motion within the SSMU’s broader governance structures, and it is with deep regret that his comments have been interpreted as anything but that. We are student leaders, but first and foremost we are people, and the accusation that President Buraga intentionally and maliciously villainized a fellow Councillor/Director is one that must not be levied lightly. For students interested in reading what was stated by the President on the motion in question, it is available here.

In the interest of providing clarity to the McGill community, we feel the need to fill in gaps in the information that is currently in the public eye. It is not our place to dictate the political ideology of individuals on campus, student leaders or not. We serve simply to provide a safe and welcoming environment for everyone. It is in the pursuit of this service that we feel the need to clarify our governance and organisational structure, something that often remains a mystery for most students, and the Conflict of Interest Policy of our Board of Directors, specifically as it applies to the situation at hand.

Another aspect requiring deep clarification is that of the intentions of the November 28th Legislative Council motion as it pertains to individuals’ religious beliefs. Last Thursday’s motion was in no way driven by antisemitic or anti-Israel sentiments or reasonings. It makes no mention of Councillor/Director Wright as a Jewish student, nor does it disapprove of a trip to Israel in particular. The motion, written before Councillor/Director Chan declined to attend Face to Face, expressed disapproval of both Councillors/Directors Wright and Chan – Jewish and non-Jewish – accepting gifts of more than a modest value in their official capacities. It makes the claim that accepting the offer of a free trip, which was gifted to them based on their status as a leader on campus, compromises their ability to be perceived as impartial when representing the entire student body on the Board of Directors. Specifically, the motion communicates to the Board of Directors that a free trip given in one’s capacity as a student leader should be considered a gift over $50, an argument which is relevant when applying a Policy that reads, “[Individuals can] under no circumstances any gifts from any person in excess of $50.00 in value”.

While we recognize that the Legislative Council, a political body, does not have the legitimacy to execute Human Resources of the SSMU, they have the duty to communicate when the Board of Directors’s procedures are not in line with what the faculties would want to see out of a policy that affects their representatives. In approving the motion, Legislative Council has ruled that students do not think a Councillor/Director can reasonably be expected to act impartially if they are in the business of accepting trips offered to them by interest groups, when these trips are over $50 in value. In subsequently overturning Council’s decision, the Board of Directors recognizes that the student body is upset with the narrow scope of the Conflict of Interest Policy, but denies that the Legislative Council is the proper forum to make decisions regarding Human Resources.

Finally, we wish to address the communication sent by Deputy Provost (Student Life and Learning) Fabrice Labeau on the morning of December 2nd, 2019 as well as his comments at Legislative Council on November 28th, 2019. We are extremely disappointed in the Deputy Provost’s decision to intervene so heavily in the affairs of the Society. While we appreciate Deputy Provost Labeau’s show of support for the safety of Jewish and pro-Israel students on this campus, he has yet to issue such support for Palestinian and Arab students on campus. Issuing such selective support only serves to reinforce the willful ignorance of certain individuals’ lived experiences and fears. Moreover, the fact that Deputy Provost Labeau’s written communication states his intent to “hold SSMU accountable” is of particular concern. When you are a member of the administration, occupying a role on the upper end of a power dynamic, you have no legitimacy to talk of holding students accountable. As a student union we require a certain degree of autonomy to effectively carry out our roles, and we fear that the Deputy Provost’s statement severely encroaches on this ability.

As student representatives, we strive, in everything we do, to improve student life at McGill University. We hope to be constantly engaged in a process of learning, and of unlearning. This requires commitment, empathy, and the ability to engage critically with all things that come before us. Misinformation and oversimplification of incredibly complex issues come at a heavy price. Our governance structures are often difficult to navigate and we recognize that these misinterpretations are not out of malice. It is our collective responsibility to ensure that they are improved. As we learn from this experience, we hope you will join us in doing better, being better, and striving to create a student community founded on love, deep understanding, and solidarity.

A Jewish student at McGill University claims she was targeted by McGill’s student government in an alleged antisemitic bullying incident recently.

Jordyn Wright, a Jewish student and member of the Student Society of McGill University’s (SSMU) Board of Directors, was singled out by her university’s student government over her decision to attend a trip to Israel sponsored by Hillel Montreal. She was told to resign if she went on the trip to Israel and the Palestinian territories, or cancel her trip entirely.

Wright’s statement posted to Facebook has gone viral and has been shared wide and far:

According to an article in The Post Millennial news outlet, the antisemitic McGill Daily’s “reporting” is cited as a source that likely fanned the flames of hatred that saw this Jewish student targeted with antisemitic abuse. HonestReporting Canada recently reported that “In an attempt to manufacture conflict and intimidate pro-Israel supporters and any McGill University students who may be open to learning more about the Jewish state, the discriminatory anti-Zionist propaganda paper the McGill Daily published a polemic on November 13 accusing Hillel McGill and GenMTL of having the temerity to offer free trips to Israel, which the Daily described as ‘propaganda.'”

CTV News Montreal’s TV report on December 3 also cited the McGill Daily’s role in this incident saying “… after the McGill Daily, a campus newspaper published an article labeling the trip as a “propaganda mission” by a pro-Israel organization, the legislative council issued Wright an ultimatum, cancel the trip or resign.”

The Daily featured similar coverage on November 19 and 25.

As we said at the time: “This is just the Daily’s latest attempt to sow division and to bully pro-Israel students into submission and to present Israel as a pariah state that McGill students should not associate with and treat as persona non grata.”

This incident spurred news coverage worldwide including: CTV TV (Montreal) and here, the front page of the Montreal Gazette and follow up coverage here and an op-ed by Gil Troy (see below), the National Post, Jerusalem Post (here too, along with an editorial here), Haaretz, Times of Israel, Arutz Sheva (here too), Jewish Telegraph Agency (here too), Jewish Journal, Jewish News Syndicate, Algemeiner (here too), The Rebel, The Forward, Jewish Press, Post Millennial, CBN News, Arutz Sheva, and the Canadian Jewish News (also here and an editorial here). Bari Weiss, staff editor at the New York Times tweeted her support too. 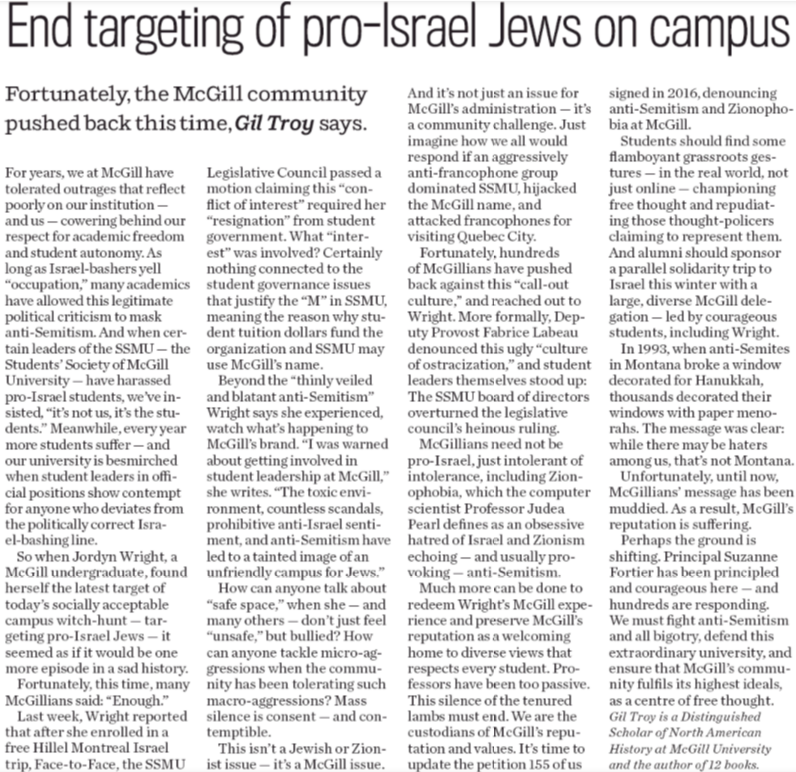 McGill University’s senior director of communications Pierre Boisseau told The Jerusalem Post that “with respect to the situation… involving student leaders enrolling in Hillel Montreal’s Face to Face program to visit Israel and Palestine, McGill University believes that diversity of opinion should be respected at all times.”

He said that when McGill students “do not feel safe on our campus because of their identity and/or political beliefs, this becomes problematic and unacceptable given the university’s values for openness, tolerance and respect.”McGill will unequivocally remain vigilant and steadfast in providing a safe and respectful learning environment, and we will take any proper measure deemed necessary to ensure that all members of our community feel safe, welcomed and respected on our campuses,” Boisseau concluded.

In 2017, a Jewish student at McGill was voted off the board of the SSMU after he was identified by BDS supporters as politically active in support of Jewish causes. Also that year, an ex-SSMU member tweeted encouraging people to “punch a Zionist.”

This is just the latest alarming incident of antisemitism at McGill University. The Montreal Jewish community looks to McGill University administrators to take decisive action to safeguard Jewish students from antisemitic discrimination and to promote a tolerant and inclusive learning environment for all students.