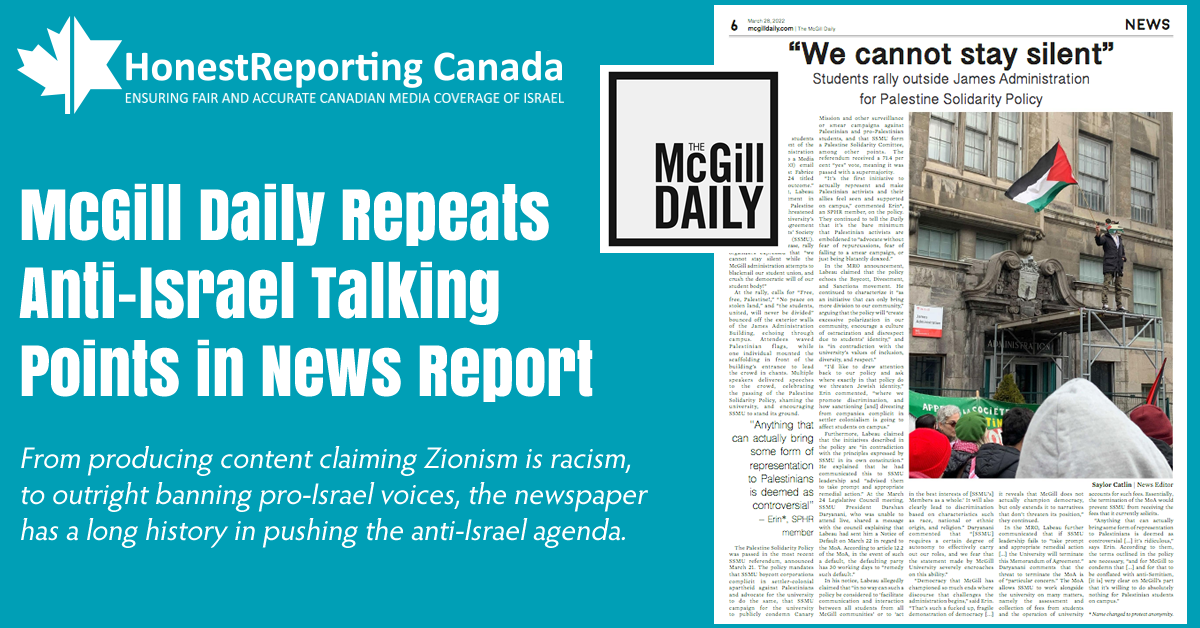 Across the Western world, university and college campuses are notorious for their anti-Israel activities. From Israel Apartheid Week programs and BDS (Boycott, Divestment, Sanctions) resolutions, as well as campus media, activists have frequently turned the post-secondary marketplace of ideas into a cacophony of anti-Israel disinformation.

The Students Society of McGill University (SSMU), the official body representing students at Montreal’s McGill University, has long engaged in this anti-Israel activism, but it seems their luck may have run out.

The SSMU recently proposed an anti-Israel referendum on campus, which culminated in a successful March 21 vote in favour. The referendum called on the student union to publicly reaffirm each semester “the SSMU’s solidarity with Palestinian students and with Palestinian liberation from settler-colonial apartheid.”

Fortunately, the university administration pushed back, with Fabrice Labeau, Deputy Provost of Student Life and Learning, demanding that the SSMU take “remedial action” against the anti-Israel resolution.

As welcome and powerful as McGill University’s push back against the SSMU is, there is another malicious actor on campus which frequently demonizes Israel: the McGill Daily.

The McGill Daily, an independent student newspaper, recently covered a public demonstration on campus against the university’s criticism of the SSMU’s recent resolution, but rather than straightforward coverage of the dispute between the university and the student union, author Saylor Catlin simply repeated the talking points of anti-Israel student groups on campus.

Despite its frequent use in anti-Israel messaging, the allegation repeated uncritically in Catlin’s March 28 article that Israel practices “settler-colonial apartheid” is absurdly false. Israel is the national homeland for the Jewish People, who have continued to live there for three thousand years, against all odds. Not only is Israel definitively not a settler colonial state, it embodies the exact opposite: the hope of a small and marginalized people, long colonized by larger powers, taking back their ancestral homeland and reviving their ancient language.

“At the rally, calls for ‘Free, free, Palestine!,’ ‘No peace on stolen land,’ and ‘the students, united, will never be divided’ bounced off the exterior walls of the James Administration Building, echoing through campus,” Catlin wrote. “Attendees waved Palestinian flags, while one individual mounted the scaffolding in front of the building’s entrance to lead the crowd in chants. Multiple speakers delivered speeches to the crowd, celebrating the passing of the Palestine Solidarity Policy, shaming the university, and encouraging SSMU to stand its ground.” 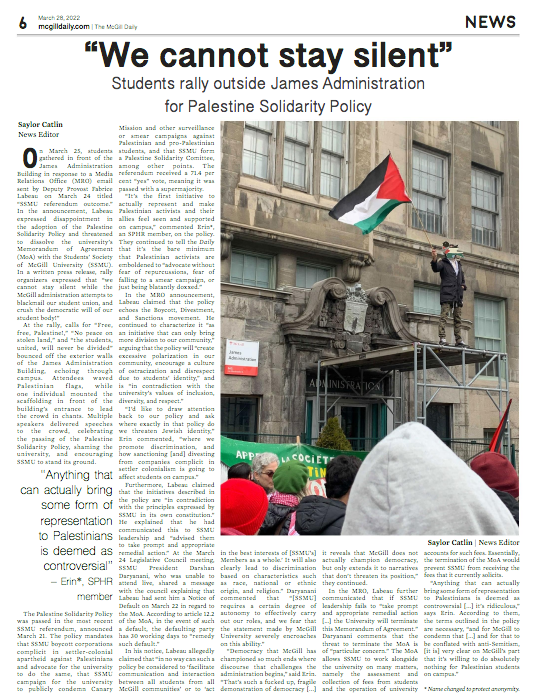 This type of flowery prose depicts anti-Israel demonstrators in heroic terms, but it’s little more than a whitewashing of the true noxious views being supported by the rally.

This isn’t an isolated incident. The McGill Daily has a history of problematic news coverage related to the Israel-Palestinian conflict.

In November, Catlin wrote a report entitled “SPHR Hosts BDS Week,” about the Solidarity for Palestinian Human Rights (SPHR) group on campus (which the paper has previously promoted and has acknowledged that SPHR has helped “compose” its journalism in the past. But once again, rather than covering the news item, Catlin used the opportunity to simply parrot anti-Israel phrases.

As covered by HonestReporting Canada at the time, Catlin’s piece uncritically repeated the same, tired anti-Israel cliches often bandied about on campus, while giving no alternative voice supportive of Israel, and no context.

The McGill Daily’s anti-Israel proclivities are evident in more than just Catlin’s reporting. Last year, during the height of the Hamas rocket war against Israel, the newspaper published a “Statement in Solidarity with Palestine,” which voiced its “solidarity with Palestinian civilians who are being forced out of their homes, violently attacked by Zionist occupation forces, and bombed in the Gaza Strip.”

Scandalously, the statement did not once condemn, nor even give passing mention to, the barrage of four thousand rockets fired by the Hamas Islamist group into Israeli population centres, maiming and killing innocent civilians.

Any observer who has followed The McGill Daily would not be surprised by this. In 2016, the newspaper refused to publish pro-Israel opinion columns because it considered the “Zionist worldview” as being allegedly “oppressive.”

The McGill Daily has also produced content that we exposed and condemned referring to Zionism – the movement for Jewish self-determination in the Jewish People’s ancestral homeland – as racism.

Student media has a valued and cherished place in Canadian colleges and universities, as do student unions. Indeed, freedom of expression is a cherished right in Canada, and one protected by the Charter of Rights and Freedoms.

But when The McGill Daily, or the SSMU, suggest that these rights are being violated by the university for pushing back against anti-Israel discrimination by the student union, they are attempting to promote a hateful movement by hiding behind the noble cause of free expression.

The anti-Israel movement has for too long run amok on colleges and universities, and McGill University’s recent statement is a major loss for the BDS cause. As these groups continue to incessantly and baselessly defame Israel, they should get used to seeing more, not less, very deserved condemnation.

HonestReporting Canada has once again conveyed our serious concerns to McGill University about the McGill Daily’s engaging in partisan anti-Israel activism, which we contend is a flagrant violation of its Memorandum of Agreement with McGill University. We again call on the University to intervene and to take action against the Daily.