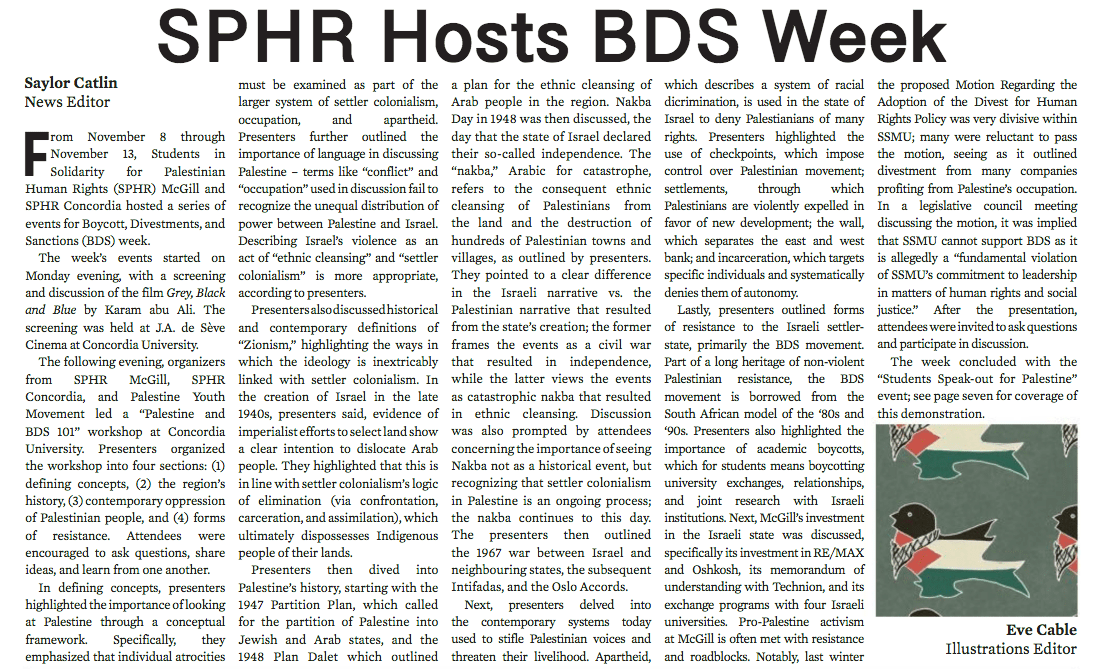 If a McGill University student happened to come across a recent November 15 article in their campus newspaper, the McGill Daily entitled: “SPHR Hosts BDS Week,” they would be inundated with some of the oldest and most tired anti-Israel cliches ever to be seen on a Canadian campus.

The article covered a recent anti-Israel program on McGill and Concordia campuses, Boycott, Divestment and Sanctions (BDS) Week, and author Saylor Catlin shared how speakers referred to a “larger system of settler colonialism, occupation, and apartheid.” But while these terms are bandied about in an attempt to demonize Israel, they have no relationship to reality.

For example, presenters argued that “Describing Israel’s violence as an act of ‘ethnic cleansing’ and ‘settler colonialism’ is more appropriate,” according to the McGill Daily article. But there is zero evidence whatsoever of any ethnic cleansing of Palestinians. In fact, the reality could not be more dramatically different. Around 70 years ago, there were around 150,000 Arabs in what is now Israel, and today that number has grown to around two million people. Contrast that with the Jewish populations in Arab lands. Around 70 years ago, more than 850,000 Jews called countries like Egypt, Iraq, Iran, Syria and others their home. Today, there are barely 15,000 Jews left. If the organizers of BDS Week would like to see examples of ethnic cleansing, there are dozens of countries in the Middle East who are living, breathing examples, but their fixation on Israel suggests that there are other motivations at play.

Catlin refers to BDS Week’s presenting the horrors of apparent “settler colonialism” and “imperialist efforts,” but these words are empty buzzwords. Israel is the world’s only Jewish state, but it is also home to more than two million Arabs, who enjoy the same full democratic rights as their Jewish neighbours. In fact, Arabs in Israel enjoy more liberal rights than Arabs anywhere else in the Middle East.

But more to the point, Israel’s Jews are no more occupiers or foreign invaders than Canada’s first nations peoples. Three thousand years ago, Jews walked in the same land and worshipped in the same language as they do today. The gall of referring to Israel as a product of colonialism and imperialism is more than an attempt to rewrite history; it is an insult to all Jews, who, even after the expulsion from their homeland by the Babylonians 2,600 years ago, and again by the Romans 2,000 years ago, never ceased from yearning to return.

Catlin shares the talking points of BDS Week presentations uncritically, but they are riddled with half-truths and misinformation, at least according to Catlin’s reporting of the event. For example, Catlin refers to Israel’s “so-called” independence in 1948 and states that Palestinians see the event as a catastrophe “that resulted in ethnic cleansing.”

But just because a claim is made, does not necessarily make it true, and by repeating it without any fact checking, the McGill Daily does a tremendous disservice to its students. The United Nations Partition Plan, which carved up historic Israel and gave most of the land to a future Arab state, was nonetheless accepted by Jewish delegates to the UN, and rejected by Arab states, who subsequently invaded the nascent State of Israel.

Catlin also reported on how speakers dutifully repeated the claim that Israel practices “apartheid” against Palestinians, and showcase “the use of checkpoints” in Judea & Samaria (or the West Bank). Israeli Jews and Arabs alike have equal rights under Israeli law, but in the face of more than 20 years of relentless attempts to murder Israeli civilians, Israel has not only a right, but a solemn responsibility to try and protect the lives of its people by ensuring that attackers do not enter Israel to cause death and mayhem. One can only wonder why the presenters oppose such defensive actions.

Despite this, the McGill Daily also published a full page article also on November 15 by Abigail Popple entitled: “Students Speak Out for Palestine” which again promoted BDS and an SPHR event. HonestReporting Canada previously condemned the McGill Daily for it’s alignment with SPHR (Solidarity for Palestinian Human Rights) which confirmed its total lack of journalistic independence from anti-Israel groups which it endorses. This in and of its own right violates the Daily’s Memorandum of Understanding with McGill University and the Quebec Press Council’s (Conseil de presse’s) Guide of Journalistic Ethics. The Daily previously acknowledged that SPHR helping compose its “journalism”. This is all produced by a paper known for its discriminatory policy of banning commentaries of pro-Zionist voices. 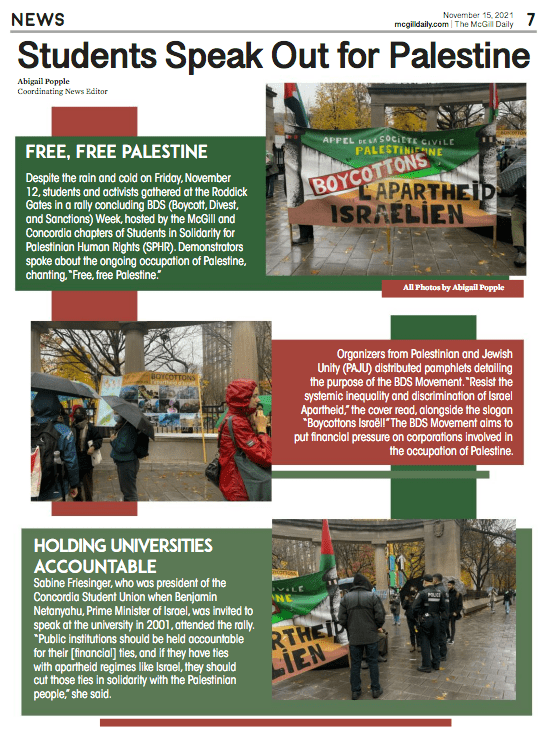 Whatever the solution will one day be between Israelis and Palestinians, the BDS movement will not be it. The BDS movement attempts to demonize Israel and to delegitimize the very concept of a Jewish state in the indigenous homeland of the Jewish People. Any attempt at reconciliation between Israelis and Palestinians, or least a civil armistice, will not come as a result of attempts to rob Israel and its Jewish majority of its historic rights.

Israel has made repeated and painful concessions for peace, including withdrawing from Gaza in 2005, and offering the Palestinian leadership eastern Jerusalem and virtually all of Judea & Samaria in 2000. Both attempts were met with violence.

HonestReporting Canada encourages you to communicate your concerns directly to McGill University Principle and Vice-Chancellor Suzanne Fortier to again condemn the Daily for spreading anti-Israel misinformation which is a flagrant violation of its agreement with McGill University. Please send emails to: suzanne.fortier@mcgill.ca.