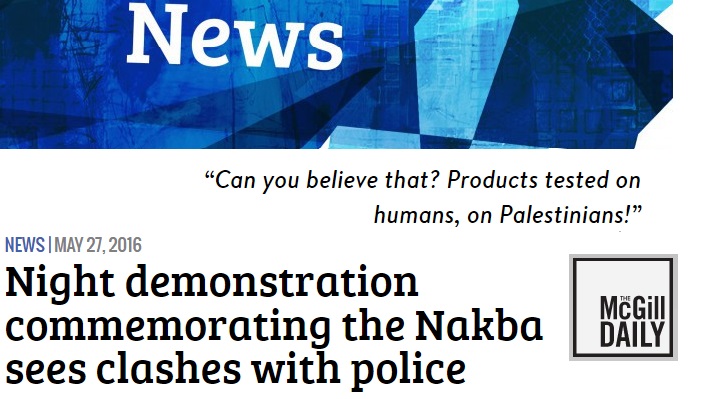 On May 27, the McGill Daily student newspaper produced a news article which gave a platform to the incendiary allegation that Israel intentionally tests weapons products on presumably innocent Palestinians.

This false and malicious allegation was made by Hala Yassin, a member of the anti-Israel organisaton PAJU (Palestinian and Jewish Unity) and was featured in an article by
Paniz Khosroshahy entitled: “Night demonstration commemorating the Nakba sees clashes with police”.

The article quoted Yassin as making the following inflammatory and unfounded accusation: “The Israeli army is proud to collaborate with arms manufacturers that brag to clients about testing its products in the field [the Gaza Strip]… “Can you believe that? Products tested on humans, on Palestinians!” she repeated.”

The allegation went unchallenged and no pro-Israel voices or perspective was quoted in the article.

The McGill Daily describes itself as being “an independent student newspaper at McGill University and is entirely run by students.” The McGill Daily’s policy claims it “seeks to promote open and sincere debate, and provide readers with an open forum to discuss ideas among themselves, and with the staff and editors of The Daily.” The Daily says it prohibits: “Any comment not complying with The McGill Daily’s code of ethics, which bans (in part) content which expresses racial, sexual, and socioeconomic bias or prejudice, as well as content which is libellous;”

Aside from this modern-day blood libel, the Daily’s article was replete with historical revisionism by carrying claims that there was a “systemic ethnic cleansing operation” and that “Palestine was wiped off the map” during Israel’s founding in 1948. Not that Israel proclaimed its independence, accepted the Partition Plan and was attacked by five Arab armies trying to wipe it off the map. In fact, there never was a sovereign Palestinian state, just British-mandate ruled Palestine where Jews and Arabs inhabited the land. The Daily’s article ignores the unbroken 3,000 year connection of the Jewish people to the land of Israel and presents Jews as foreign transplants and colonizers.

There is no place in Canadian journalism – even campus media – for the publication of a modern day blood libel claiming that Israel intentionally tests weapons products on presumably innocent Palestinians. If you’re outraged by the McGill Daily’s actions, please send a complaint today at: news@mcgilldaily.com