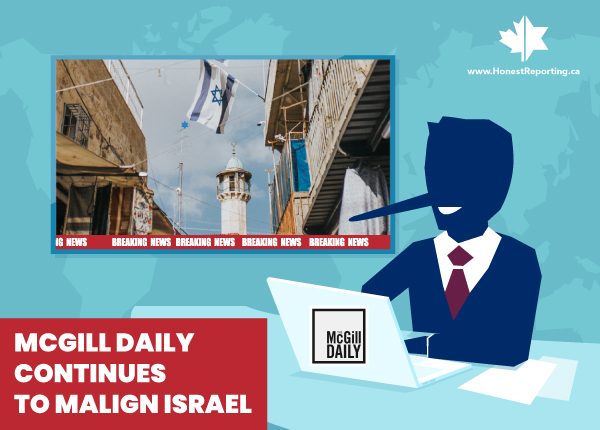 The McGill Daily, a campus paper accused of antisemitism for its anti-Zionist stance, known for singling Israel out for exclusive condemnation, and whose content is created in part by anti-Israel groups, today begrudgingly published a letter to the editor from several pro-Israel groups which took the paper to task for its discriminatory and bigoted policy of barring pro-Israel commentaries from its pages.

The letter by Am McGill, Chabad at McGill, Hillel McGill and Israel on Campus at McGill, was prefaced by an editorial comment written by the Daily that asserted the following:

Our letters policy contains a clause that allows the editorial board to reject letters “whose content displays racial, ethnic, sexual, and socioeconomic prejudice.” The definition of these terms is subject to interpretation by McGill, as per our Memorandum of Agreement. The Daily’s editorial board feels that the letter below contains the prejudice outlined in its letters policy, but the McGill administration disagrees, which is why it is appearing in the paper, and why others with similar content may appear in the future.

The Daily will not be engaging in an argument about the definition of Zionism in response to this letter, because the editorial board believes that in attempting to spark these conversations, the authors of such letters are drawing focus away from the human rights violations being perpetrated against the Palestinian people. The Daily’s Editorial Board would instead like to reaffirm its position, which is one in support of Palestinian people.”

To parse the Daily’s statement, the letter from these pro-Israel groups was deemed by the Daily as being prejudicial and was implicitly a form of racism and while the Daily acknowledges supporting the Palestinians people, they don’t support Israel and seem to not care about the human rights violations being perpetrated against Israelis by Palestinian terror groups.

We encourage you to read the excellent letter by these pro-Israel groups at McGill who accuse the Daily’s editors of being “complicit in an act of antisemitic gatekeeping through which Jews are being excluded from participating in intellectual debate.”

The letter can be found online by clicking here or immediately below:

Letter To The Editorial Board

By: Am McGill, Chabad at McGill, Hillel McGill, Israel on Campus at McGill 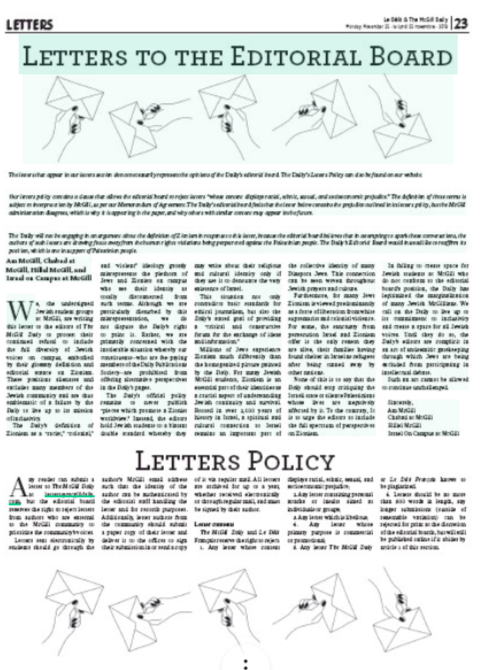 We, the undersigned Jewish student groups at McGill, are writing this letter to the editors of The McGill Daily to protest their continued refusal to include the full diversity of Jewish voices on campus, embodied by their glossary definition and editorial stance on Zionism. These positions alienates and excludes many members of the Jewish community and are thus emblematic of a failure by the Daily to live up to its mission of inclusivity.

The Daily’s definition of Zionism as a “racist,” “colonial,” and “violent” ideology grossly misrepresents the plethora of Jews and Zionists on campus who see their identity as totally disconnected from such terms. Although we are particularly disturbed by this misrepresentation, we do not dispute the Daily’s right to print it. Rather, we are primarily concerned with the intolerable situation whereby our constituents—who are fee-paying members of the Daily Publications Society— are prohibited from offering alternative perspectives in the Daily’s pages.

The Daily’s official policy remains to never publish “pieces which promote a Zionist worldview.” Instead, the editors hold Jewish students to a blatant double standard whereby they may write about their religious and cultural identity only if they use it to denounce the very existence of Israel.

This situation not only contradicts basic standards for ethical journalism, but also the Daily’s stated goal of providing a “critical and constructive forum for the exchange of ideas and information.”

Millions of Jews experience Zionism much differently than the homogenized picture painted by the Daily. For many Jewish McGill students, Zionism is an essential part of their identities as a crucial aspect of understanding Jewish continuity and survival. Rooted in over 2,000 years of history in Israel, a spiritual and cultural connection to Israel remains an important part of the collective identity of many Diaspora Jews. This connection can be seen woven throughout Jewish prayers and culture.

Furthermore, for many Jews Zionism is viewed predominantly as a force of liberation from white supremacist and colonial violence. For some, the sanctuary from persecution Israel and Zionism offer is the only reason they are alive, their families having found shelter in Israel as refugees after being turned away by other nations.

None of this is to say that the Daily should stop critiquing the Israeli state or silence Palestinians whose lives are negatively affected by it. To the contrary, It is to urge the editors to include the full spectrum of perspectives on Zionism.

In failing to create space for Jewish students at McGill who do not conform to the editorial board’s position, the Daily has legitimized the marginalization of many Jewish McGillians. We call on the Daily to live up to its commitment to inclusivity and create a space for all Jewish voices. Until they do so, the Daily’s editors are complicit in an act of antisemitic gatekeeping through which Jews are being excluded from participating in intellectual debate.

Such an act cannot be allowed to continue unchallenged.

Sincerely,
Am McGill
Chabad at McGill
Hillel McGill
Israel On Campus at McGill