McGill Daily Back To Its Old Anti-Israel Tricks 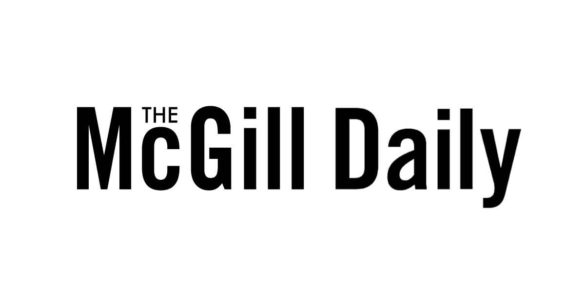 Update: March 30, 2020: The Daily published a commentary by Andreas Iakovos Koch on March 27 promoting another SPHR effort while noting the following: “In October 2018, the ASN provoked more controversy on campus by inviting Nuseir Yassin, better known by his Facebook name Nas Daily, a Palestinian citizen of Israel and video-blogger who has been widely criticized for trivializing or dismissing the decades-long oppression of Palestinians by the Israeli state. “

The McGill Daily, a campus paper accused of antisemitism for its anti-Zionist stance, known for singling Israel out for exclusive condemnation, and whose content is created partly by anti-Israel groups, was back to its old anti-Israel tricks in its February 24 edition.

The Daily devoted a whole page to the anti-Israel advocacy efforts of Suzanne Weiss, a Holocaust survivor and Israel detractor. The Daily profiled an event organized by anti-Israel groups Independent Jewish Voices (IJV) and Solidarity for Palestinian Human Rights (SPHR). Both SPHR and IJV are zealous supporters of the antisemitic BDS movement and the Daily has acknowledged that both anti-Israel organizations are involved in producing the Daily’s anti-Israel and antisemitic “journalism”.

Instead of being an independent newspaper with objectivity and neutrality as its guiding principles, anti-Israel groups help to create and curate content at the Daily.

In an article entitled: “Suzanne Weiss, Holocaust Survivor, Speaks on Her Life and Activism,” author Abbas Mehrabian wrote the following:

Weiss believes that Israeli Jewish people and Palestinians are both victims: ‘The victims of one great historic injustice, the Jews, themselves became the agents of an inflicting injustice on an indigenous innocent population, the Palestinians.’ She added that Palestinians have found allies among Indigenous peoples of Canada, whose land was stolen through a similar process of colonialism. In Weiss’ words, ‘Palestinians and natives of Turtle Island, they have been both colonized and subjected to ethnic cleansing.'” 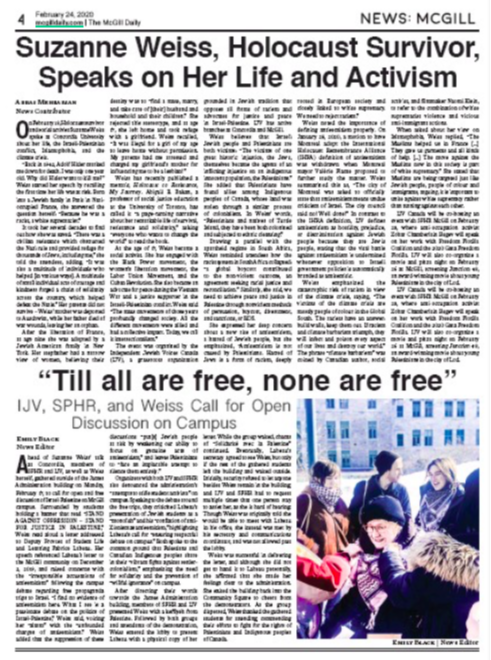 In other words, Jews who were the victims of the Holocaust that saw six million Jews murdered by the Nazis, are now carrying out a similar atrocity on Palestinians. This implicit comparison of Israel to Nazi Germany fits the very definition of antisemitism per IHRA (International Holocaust Remembrance Alliance) of which, Canada is a member.

Weiss, who is herself a support of the antisemitic BDS movement, likened Israeli practices to “apartheid” South Africa.

The Daily’s article concludes with a free advertisement to an IJV/SPHR event: “IJV Canada will be co-hosting an event with SPHR McGill on February 25, where anti-occupation activist Zohar Chamberlain Regev will speak on her work with Freedom Flotilla Coalition and the 2020 Gaza Freedom Flotilla. IJV will also co-organize a movie and pizza night on February 26 at McGill, screening Junction 48, an award-winning movie about young Palestinians in the city of Lod.”

Another corresponding article by Emily Black entitled: ““Till all are free, none are free”” again profiled Weiss’ anti-Israel activism. The article even described sponsored trips to Israel as nothing more than “propaganda trips”.