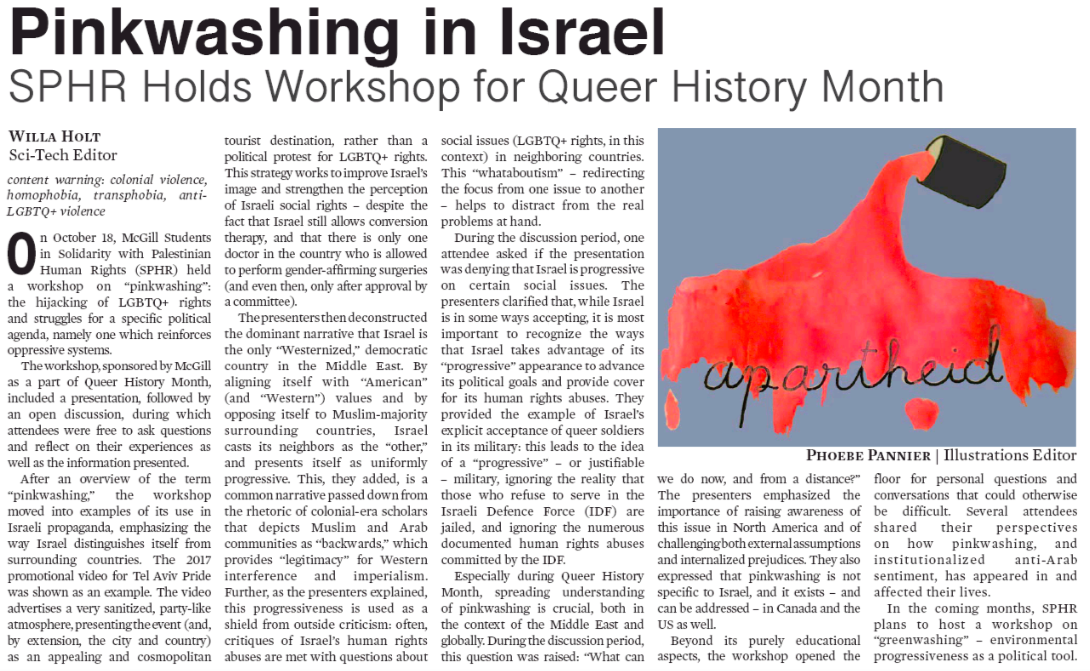 In its most recent edition on October 21, Science and Technology Editor, Willa Holt, accused Israel of “Pinkwashing” and “apartheid”. Once again, the Daily gave coverage to an SPHR workshop which the author claims was sponsored in part by McGill University (HRC has not been able to confirm the accuracy of this claim) as a part of Queer History Month.

Holt, who previously wrote an article which falsely claimed that Israel advocates violence against innocent Palestinians, stated the following in this article:

After an overview of the term “pinkwashing,” the workshop moved into examples of its use in Israeli propaganda, emphasizing the way Israel distinguishes itself from surrounding countries. The 2017 promotional video for Tel Aviv Pride was shown as an example. The video advertises a very sanitized, party-like atmosphere, presenting the event (and, by extension, the city and country) as an appealing and cosmopolitan tourist destination, rather than a political protest for LGBTQ+ rights. This strategy works to improve Israel’s image and strengthen the perception of Israeli social rights – despite the fact that Israel still allows conversion therapy, and that there is only one doctor in the country who is allowed to perform gender-affirming surgeries (and even then, only after approval by a committee).”

The slur that Israel engages in “pinkwashing,” is used by Israel’s detractors to claim that the Jewish state exploits its progressive record of LGBTQ+ rights as a means to distract everyone from its so-called systematic denial of Palestinian rights.

“During the discussion period, one attendee asked if the presentation was denying that Israel is progressive on certain social issues. The presenters clarified that, while Israel is in some ways accepting, it is most important to recognize the ways that Israel takes advantage of its “progressive” appearance to advance its political goals and provide cover for its human rights abuses. They provided the example of Israel’s explicit acceptance of queer soldiers in its military: this leads to the idea of a “progressive” – or justifiable – military, ignoring the reality that those who refuse to serve in the Israeli Defence Force (IDF) are jailed, and ignoring the numerous documented human rights abuses committed by the IDF.”

Accordingly, Israel’s credentials as a haven for gay rights, its tolerant society and legal rights for LGBTQ+ individuals, is really just a smokescreen to camouflage alleged human rights violations of Palestinian-Arabs. So-long as Palestinians are aggrieved and the conflict remains unresolved, Israel cannot trumpet its pro-LGBTQ+ credentials and record. Ironically, in the Palestinian territories of Gaza and the west bank, not only is homophobia rampant, but LGBTQ+ individuals have been discriminated, subject to arbitrary arrest, assaulted, murdered and subject to capital punishment.

Just a couple months ago, a Palestinian gay and transgender rights group was barred by Palestinian Authority police from holding events in the west bank and participants were threatened with arrest.

Again, so much for objectivity at the Daily, a paper subsidized by over $300,000 from McGill University students and which has been tarred for peddling in antisemitism and for having a policy to bar pro-Zionist opinions.

HRC will continue to monitor the Daily and to name and shame it.