He did it again. 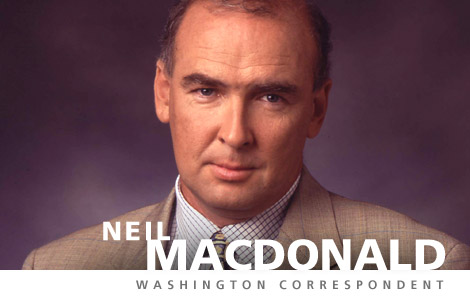 Commenting in the CBC website on Friday, CBC’s Neil Macdonald offered his opinion on a UN reform committee’s proposal to declare that “there is nothing in the fact of occupation that justifies the targeting and killing of civilians”:

“But the Israeli-Palestinian conflict is not as easy to characterize as the UN report might wish. The Israeli soldiers who enforce the occupation kill a great many Palestinian civilians. If Palestinians have committed terror, the Israelis have certainly committed war crimes.

There is also the question of whether the Jewish settlers in the West Bank and Gaza, thousands of whom are well armed and overtly bellicose, constitute civilians or combatants.“

In other words, the targeting and killing of Israeli settlers may not be terrorism. Macdonald’s comments bear an uncomfortable resemblance to Prof. Mohamed Elmasry’s universally denounced statements legitimating attacks against all Israelis over 18 (and they will probably not comfort Jewish “settler” children living in the West Bank and Gaza, hundreds of whom have been killed by Palestinian attackers in the past four years).

But that was just a warm-up. Reporting from Washington yesterday on the deadly al-Qaeda attack on a US consulate in Saudi Arabia, Macdonald was at it again. Allowing that “it’s a familiar Bush theme that Islamists hate Americans for their values,” Macdonald made his own opinion clear by adding gratuitously, “rather than for their [US] policies in the Middle East.”

He then went out of his way to find someone who would blame the US relationship with Israel for the attack on the Jeddah consulate. He found a willing and agreeable partner in Allen Keiswetter at the Middle East Institute – the only person interviewed in Macdonald’s entire report.

Macdonald then explained to Canadian viewers that American support for Israel is the primary cause of Arab violence against America:

Macdonald: “But some experts say other American policies provoke violence too. Allen Keiswetter has advised the administration here on foreign policy.”

Keiswetter: “I think the principal reason is our policies on the Arab-Israeli issues. This is extremely important. We’re now regarded as being very much in the pockets of Sharon. And the second reason of course is Iraq.”

Of all the “experts” he could have used and all the directions his report could have taken, why did Macdonald specifically insert a comment about Israel, using the distasteful imagery of America “in the pockets of Sharon”?

The answer lies in a May 4, 2004 report Macdonald filed for CBC’s The National, which prompted not one but a remarkable two on-air apologies. In that report Macdonald quoted a former US diplomat turned anti-Israel lobbyist who falsely implicated Israeli agents in the Abu Ghraib prison abuses (see video in RealVideo or Quicktime):

“We know that the Israeli intelligence was operating in Baghdad after the war was over. The question should be: Were there any foreign interrogators among those that were recommending very, very bad treatment for the prisoners?”

The CBC apologized on air for that report and CBC news editor-in-chief Tony Burman, while reassuring viewers that he had found “no evidence” of anti-Israel bias by Macdonald, conceded that:

“Viewers have every right to expect more from The National and CBC News. More care should have been taken on this story, and — as of this week — we have modified our editorial processes and procedures to ensure that this situation is never repeated.“

CBC Ombudsman David Bazay, in response to allegations of anti-Israeli bias in the May incident, declared in his report that while Macdonald was not guilty of bias, “under CBC journalism policy reporters, editors and producers must not only avoid bias; they must avoid the appearance of bias. And, I agree, the May 4report did expose The National to the appearance of bias.”

In this latest episode, by going out of his way to involve Israel in a news story that had nothing to do with it, Macdonald is guilty not only of the appearance of bias, but of bias itself.

While Macdonald appears unable to resist his compulsive urges toward Israel, the CBC has promised its viewers a higher standard of journalism.

It is now time to deliver on that promise. Macdonald must go.

WHAT YOU CAN DO NOW

Tell the CBC that Neil Macdonald’s reporting is biased against Israel and no longer deserves to be included in the CBC’s newscasts.

Write to Tony Burman, editor-in-chief of CBC News, at Tony_Burman@cbc.ca

Thank you for helping promote fair and accurate
news coverage of Israel and the Middle East .

Time to Tell the Truth about Convicted Terrorists...