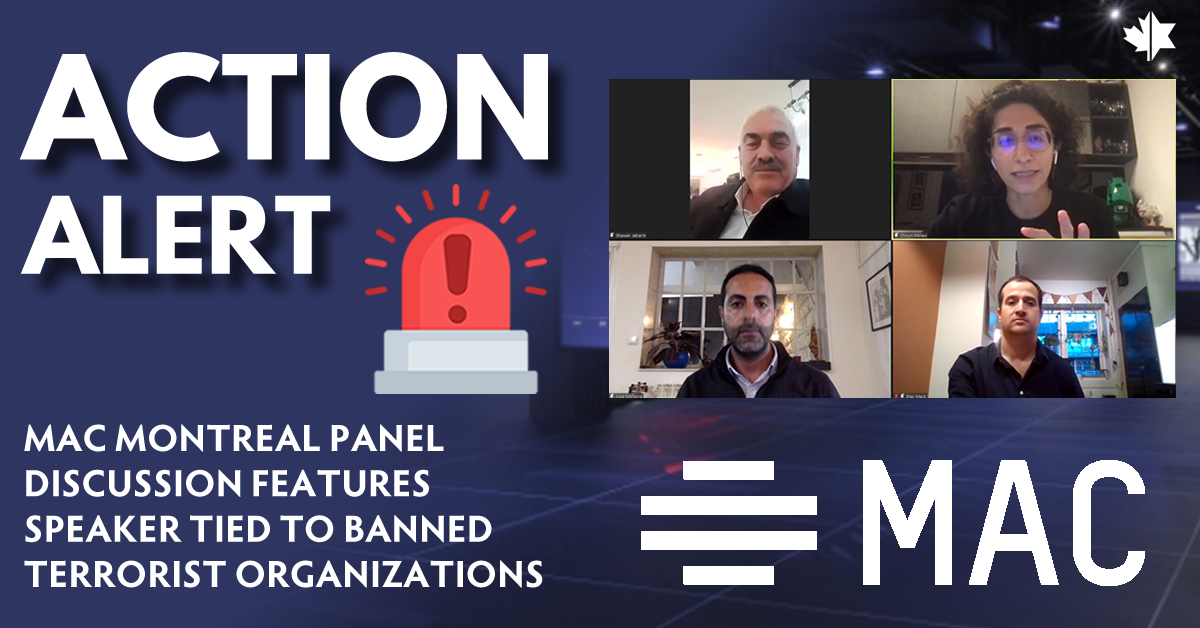 On Sunday, March 13, MAC Montréal, which is funded by the Canadian Government, the Province of Quebec and the Canada Council for the Arts, hosted a virtual panel discussion as part of its ongoing exhibit, Terror Contagion.

MAC organized an international panel discussion on the NSO Group, under its annual Max and Iris Stern Symposium. Watch a segment of the event here or immediately below:

To recall, HonestReporting Canada previously critiqued MAC Montréal for hosting an exhibit which was produced by the anti-Israel organization, Forensic Architecture, that portrayed Israeli forces as having carried out an “extrajudicial execution” of what it depicts as an innocent Palestinian man, whereas Israel says the Palestinian was a terrorist who deliberately tried to murder Israelis by ramming his car into soldiers at a checkpoint.

As we noted at the time, the creators of the exhibit were Eyal Weizman, an anti-Israel propagandist and Al Haq, a radical Palestinian NGO that was recently branded as a terrorist group by Israel which funded Forensic Architecture’s investigation.

The online panel discussion entitled: “Digital Occupation: From Walls to Firewalls”, was hosted by Shouri Molavi of Forensic Architecture, and featured panelists Alaa Mahajna and Eitay Mack, two Jerusalem-based human rights lawyers, as well as Shawan Jabarin, the Director General of Al Haq Legal Centre in Ramallah. No pro-Israel voices were included on the panel.

Casual viewers would conclude from MAC’s program that Al Haq is an organization “defending human rights in Palestine,” as their website claims, but not only is that far from a full picture, it’s a remarkable whitewashing of the organization’s true face.

In December 2021, Al Haq was designated a terrorist organization by Israel for its ties to the Popular Front for the Liberation of Palestine (PFLP), arguing that the groups are “controlled by senior leaders” of the PFLP.

Though critics predictably have claimed that Al Haq’s links to PFLP are illusory, there is significant evidence connecting them. Jabarin, Al Haq’s leader, was convicted by an Israeli court of recruiting for PFLP, has spent time in Israeli jails, and 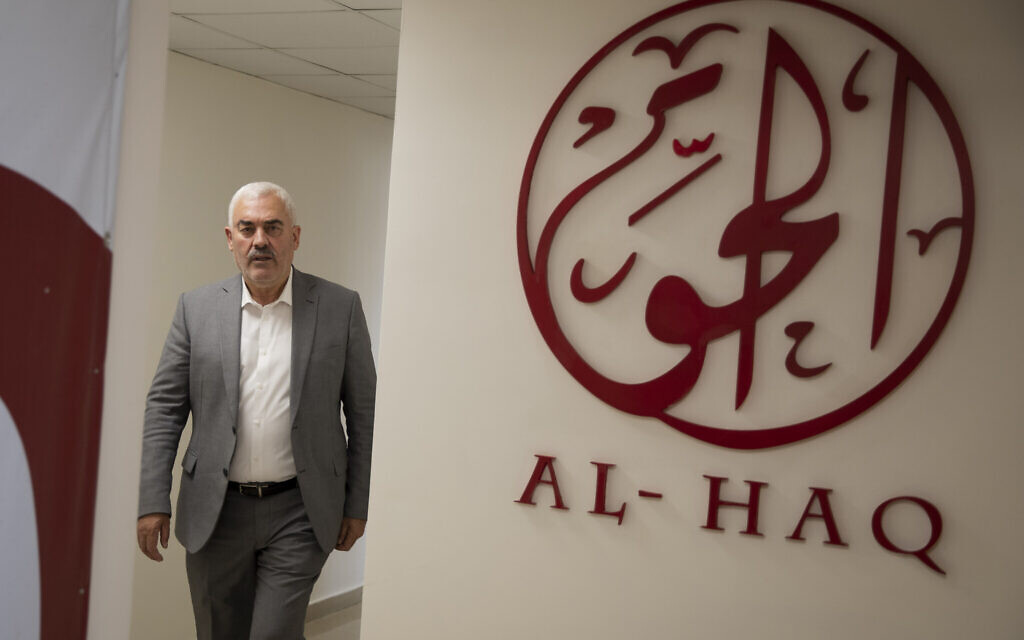 was also refused exit visas by both Israel and Jordan. Jabarin leads Al Haq, and while he portrays himself as an advocate for everyday Palestinians, in 2007 Israel’s Supreme Court characterized Jabarin as “Dr. Jekyll and Mr. Hyde” who portrayed himself as a respectable human rights activist by day, but who was also linked to the PFLP terrorist group at the same time.

In the event, Shawan Jabarin spoke about “colonial” forms of violence in “Palestine”. Saying that all aspects of Palestinian life are controlled by the Israeli “occupation”, both physically and emotionally. He said Israel has a new form of control in the digital sphere where it created programs to monitor and control Palestinians and to take information from Palestinians phones, laptops and then blackmail them into becoming collaborators. He said the Israeli government uses the claim of “terrorism” to justify its use of surveillance technologies.

And though the panel discussion was framed by the organizers as being thoughtful and provocative, it was largely a rehashing of tired anti-Israel tropes and talking points with little basis in reality.

Moderator Molavi repeatedly referred to “Israel’s settler colonial occupation” of Palestinian land. Despite the frequency of such terms being used to defame Israel, there is simply no facts to buttress the claim. Molavi effectively erased three thousand years of Jewish presence in their homeland, referring to Israeli Jews as “settlers” and “colonists”, but Jews are not newcomers to the land; they have been living in ancient Israel for three millennia. This longstanding presence is proven by evidence both oral and written, and copious archaeological records, proving beyond a shadow of a doubt that the Jewish People are as intertwined with the land of Israel as the soil in the ground.

The panelists altogether ignored how Palestinian terrorism is waged against Israeli civilians on a daily basis, whether through rocket attacks, suicide bombings, stabbing and shooting rampages and car-ramming attacks.

For his part, Jabarin described Israel in terms which can only be referred to as revisionist. “There is no due process in Israel, there is no protection of Palestinians before the judiciary. There is no fair judiciary system there,” Jabarin said. In sharp contrast, Israel is in fact a liberal democracy with an independent judiciary, where Israeli Arabs and Jews alike serve. Importantly, when there are cases of Israeli soldiers abusing or assaulting Palestinians, they are charged by the Israeli judiciary.

Israel is a society governed by the rule of law, and with equitable treatment for all. Contrast this system with life under Hamas’ dictatorship in Gaza, or the Palestinian Authority in Judea & Samaria/West Bank. There, civil liberties are few and far between, free expression is limited, and repression is widespread.

In response to HonestReporting Canada’s original complaint to MAC Montréal this past January about the Terror Contagion exhibit, the Museum’s Marketing and Communications Manager, Marine Godfroy, acknowledged the following in a January 19 email to HRC: “… The Extrajudicial Execution of Ahmad Erekat; that could appear to be fueling negative sentiment towards a particular country or community…” Importantly, Godfroy failed to identify that the “negative sentiment” was being directed solely towards Israel, the world’s only Jewish state and tacitly, to members of the Canadian Jewish community.

She then added in her email that the Museum would add a “trigger warning” to the exhibit, saying “it is not our intention to target a specific group” and committed to “engaging in discussions” and working “in a constructive and respectful manner,” and yet, two months later, the Museum doubled-down by producing a panel discussion featuring a speaker connected to banned Palestinian terrorist organizations and that was replete with the standard cavalcade of anti-Israel slurs and misinformation against the Jewish State.

Canadians are fortunate to live in a country with free expression as guaranteed by the Charter of Rights and Freedoms. And while those rights extend even to spreading anti-Israel disinformation and propaganda, we are of the view that these Charter rights do not include the ability to host an individual and an organization with deep ties to banned terrorist organizations. Even more scandalous is that taxpayer dollars, both provincially in Quebec, and across Canada, are supporting MAC Montréal as it hosted this symposium.