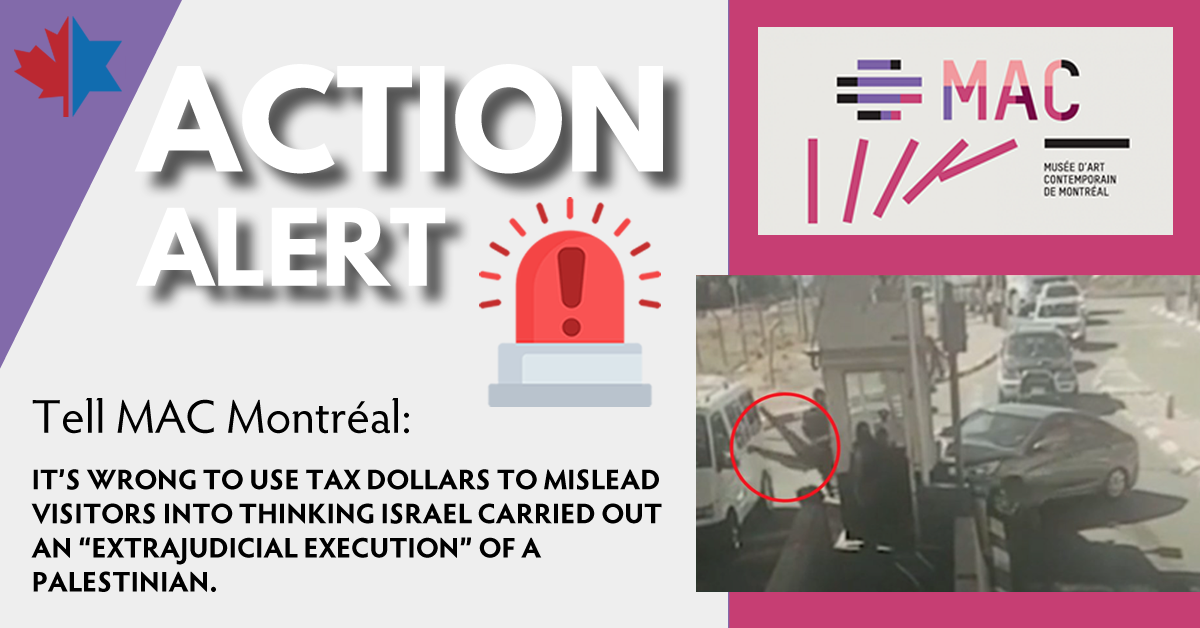 Montreal’s Museum of Contemporary Art, MAC Montréal, is presently hosting an exhibit that portrays Israeli forces as having carried out an “extrajudicial execution” of what it depicts as an innocent Palestinian man.

The exhibit called Terror Contagion is being featured until April 18, 2022. The exhibit is based on an investigation by a highly politicized anti-Israel organization called Forensic Architecture which claims that Israeli forces used excessive and unwarranted deadly force to kill Ahmad Erekat, nephew of the late Saeb Erekat.

In an incident that made headlines in June 2020, Ahmad Erekat was caught on video committing an act of terrorism in a car-ramming attack on Israeli soldiers. In the attack, Erekat approached an Israeli checkpoint in Abu Dis, near Jerusalem and then abruptly accelerated and swerved his car 90 degrees into Israeli police, ramming and knocking a female officer into the air, before colliding with the booth and coming to a stop. Erekat is said to have ignored warnings issued by Israeli officers and swiftly exited his car, possibly in an effort to attack more soldiers.

Israel says he carried out a premeditated and intentional terror attack, whereas Erekat’s family says he was rushing to pick up his sister and mother ahead of a family wedding later that evening, and lost control of his vehicle.

Visitors at Mac’s exhibit watch an 18-minute video made by Forensic Architecture which claims that Erekat was “executed” by “Israeli occupation forces” after his car crashed at an Israeli checkpoint (Watch the video narrated by anti-Israel activist Angela Davis below). In the video, Israel is called a “neo-colonial regime”, and checkpoints are erroneously described as “illegal”.

The creators of the exhibit are Eyal Weizman, an anti-Israel propagandist and Al Haq, a radical Palestinian NGO that was recently branded as a terrorist group by Israel which reportedly funded Forensic Architecture’s investigation.

Absent from the exhibit is the following context: Israeli forces are all too familiar with a pattern of lone-wolf car-ramming attacks, many where the attacker exits their vehicle and then proceed to stab Israeli officers. Israel’s strict rules of engagement only allows the use of deadly force when their lives are in imminent danger.

Since 2015, there have been over 80 vehicular (ramming) attacks in Israel. More recently, on January 11, 2022, an Israeli soldier was moderately wounded in what the IDF said was a suspected ramming attack near the “West Bank” settlement of Halamish. In 2014, one of these attacks killed a 3-month-old Israeli baby. Sometimes, as in this case in 2020, after a car-ram attack, the terrorist left his vehicle and carried out a secondary attack with a knife.

As HonestReporting has previously reported, Eyal Weizman is an Israeli expat who also conducted research on behalf of the anti-Israel NGO B’Tselem on the “planning aspects of the Israeli occupation of the West Bank,” and who has close ties to multiple radical left-wing organizations operating in Israel. He has also been declared a “security threat” by the United States and denied entry to the country. In December, HonestReporting Canada took Weizman to task for claiming on CBC that Israel develops and tests weapons on Palestinians for profit. The organization he’s affiliated with, Forensic Architecture (FA), has been accused of obscuring facts when it comes to issues pertaining to Israel, criticized for engaging in conspiracy theories, and for singling Israel out for disproportionate censure. 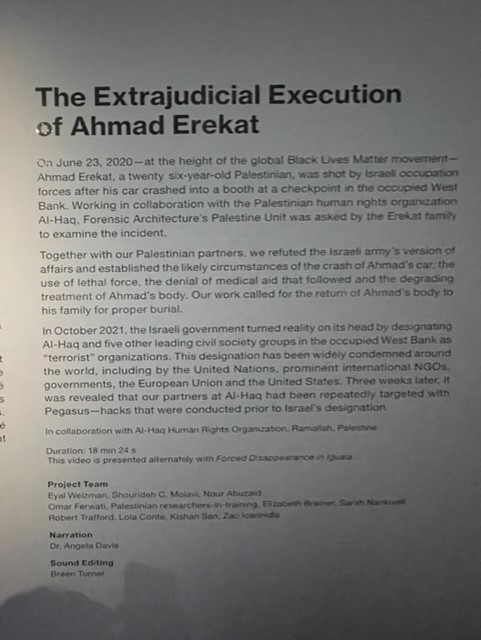 FA denies that the attack was deliberate saying it was an “error or a vehicle malfunction,” also claiming that the soldiers were in no danger when they opened fire at Erekat. On this point, Shani Orr Hama Kadosh, the Israeli border police officer whom Ahmad hit, said in an interview that it clearly appeared to be intentional. The Times of Israel reported: “I signaled to him to halt, the car started to slow down, and I moved in his direction,” Kadosh told Channel 13 news. “He saw that I took a step, he looked me in the eye, turned the steering wheel and rammed into me, and I flew to the other side” of the median.”

FA also claim that Erekat was denied medical care after he was shot. However, the IDF disputes this allegation. In a statement, the IDF said that “Contrary to allegations, Erekat was examined at the scene of the incident by medical personnel a few minutes following the attack, and was found to have no pulse or breathing, and therefore no resuscitation procedures were performed on the spot, and his death was pronounced accordingly. During the entire incident there was no degrading treatment or infringement of the dignity of the deceased.”

Forensic Architecture also takes issue with Israel’s holding on to Erekat’s body, which is an Israeli policy meant to deter terrorists and to apply pressure on Hamas to release from captivity Israelis Avera Mengistu and Hisham al-Sayed, as well as the bodies of Israeli soldiers Hadar Goldin and Oron Shaul.

MAC Montréal is funded by the Canadian Government, the Province of Quebec and the Canada Council for the Arts. That tax dollars were used to give a platform to an exhibit that wrongly portrays Israeli soldiers as carrying out an extrajudicial execution of an innocent Palestinian motorist is highly objectionable. In truth, Israeli forces acted in self defense when faced with a deliberate terror attacker who sought to inflict maximum harm. This exhibit effectively denies Israel the right to self defense and presumes Israel’s guilt. Visitors to this exhibit at MAC Montréal were seriously mislead and Israel was wrongly convicted in the court of public opinion. Send a complaint today to: info@macm.org.