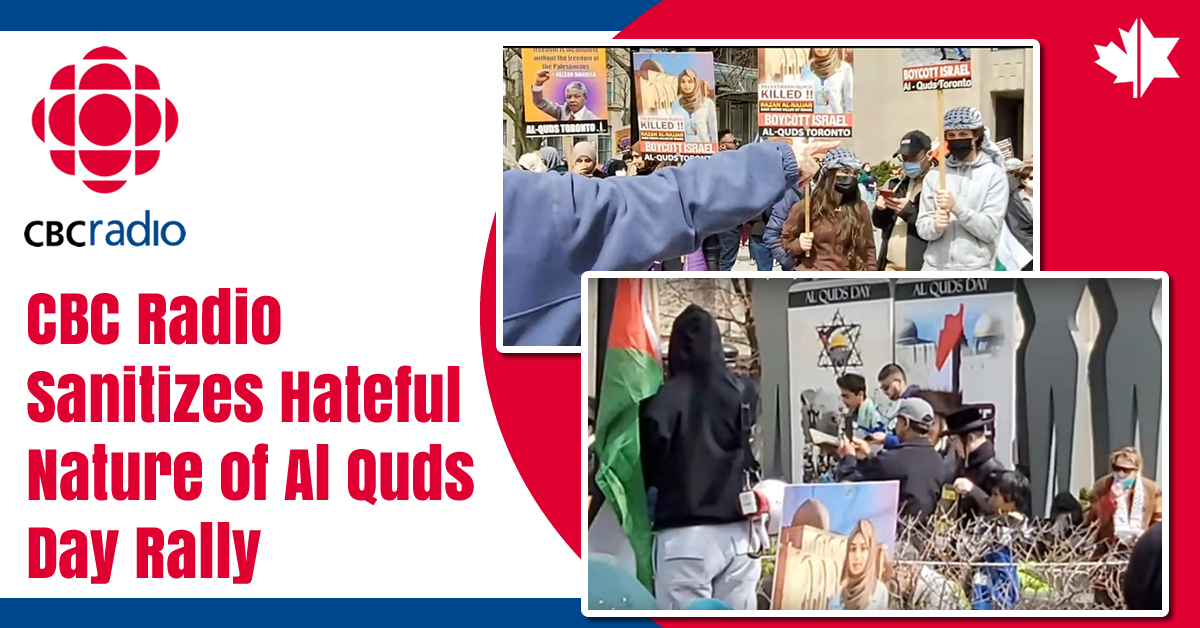 The annual hate fest known as the Al Quds Day rally regularly espouses virulent antisemitism, incitement to violence, glorification of terrorism and open celebrations of the massacres of Jews.

Conceived by the Iranian regime to mobilize its supporters to call for Israel’s destruction, every year, anti-Israel protesters gather in downtown Toronto to demonize Israel with hateful rhetoric calling for Israelis to be shot at, for Zionists to be left in body bags, and for “intifadas” to be launched to wipe the Jewish state from the Middle East, or, in the parlance of those in attendance, “From the river to the sea, Palestine will be free.”

Yesterday, as we observed Shabbat, anti-Israel activists gathered in #Toronto for Al Quds day, established by Iran to foment hatred against #Israel.

Protesters called for intifada, made despicable claims that Zionism is racism, and held a placard of Iran’s IRGC’s Soleimani. pic.twitter.com/3Y0bYuIDsV

In covering the event which has been roundly condemned by Canadian politicians and which is known for giving platforms for hate speech, CBC implicitly framed the rally as being an innocuous and a peaceful protest.

On the morning of Sunday May 1st, CBC Radio reported on the Al Quds Day rally in Toronto, but instead of providing context to its listeners about the toxic agenda and bigoted statements made by past and present participants, CBC presented the rally as being benign in nature and ignored the serious concerns of Canada’s Jewish and pro-Israel community.

Listen to the report below:

CBC Anchor: “It’s a busy protest weekend as well, with more than a dozen demonstrations booked for yesterday and today. There had been concerns about yesterday’s pro-Palestine Al Quds demonstration, but Robert Masdoud, who attended the event, says the large police presence was overkill.”

Robert Massoud: “Well, I think there are certainly overreacting. I mean, if you just look around the children, women, young people, you know, were peaceful and we have peaceful. I don’t know where they’re getting the impression that this is not a peaceful protest. If you just look around, you know, I mean, your eyes will tell you that there’s, there’s no threats for violence.”

CBC Anchor: “So far there have been no reports of any incidents at the Toronto protest this weekend.”

CBC’s report failed to provide any context about the legitimize concerns from Canada’s Jewish community, specifically, the hateful history of the Al Quds Day rally, it’s meaning & purpose, as well as the unacceptable statements made at a similar local rally a week ago praising Arab terrorism against Israel.

The CBC’s report included a statement by an anti-Israel participant claiming it was peaceful in nature, while denying concerns made by Canada’s pro-Israel community, all without providing any context or counter-argument. No mention was made about how, for example, Mayor John Tory and Police Chief James Ramer, have both expressed zero tolerance for intimidation, harassment, and hate at the Al Quds Day rally.

No mention was made about how this rally featured calls for “Intfidadas,” and reportedly carried antisemitic statements claiming that “Zionism is racism”.

CBC’s report sanitized the hateful Al Quds Day rally and failed to give a platform to the pro-Israel community to have its grievances heard and contextualized. Take action now by sending complaints to CBC Editor-In-Chief Brodie Fenlon at brodie.fenlon@cbc.ca.