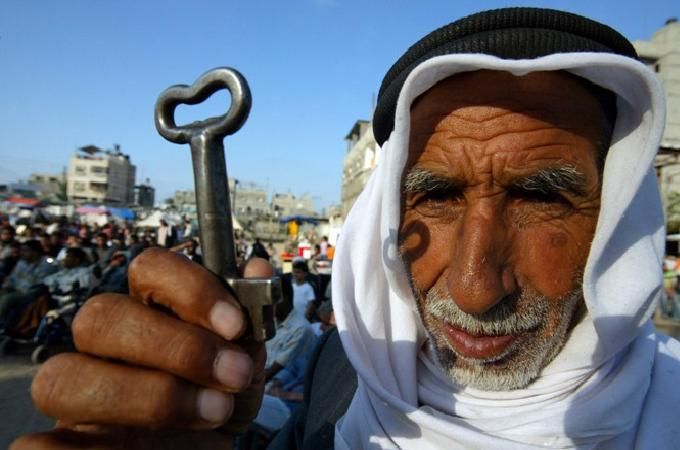 The close to 5-minute feature-length report can be heard at the following link or by clicking onto the listen now button below.

This month marks the 70th anniversary of the creation of Israel. Many Palestinians call it the “Naqba” or “catastrophe”. In 1948, hundreds of thousands of Palestinians fled their homes, most never returned. 70 years later, few Palestinian refugees are old enough to remember life before the exodus, but in a refugee camp in Southern Beirut, one man is trying to keep those memories alive. Rebecca Collard with the story.”

CBC listeners were told about the “Museum of Memories” which shows 700+ items from the 1948 exodus. It’s a form of “resistance”, the Museum operator says, for keeping alive the idea of a homeland he’s never been allowed to return to.

Reporter Collard says that Palestinians dream of a homeland they never knew. We hear of the “suffering of Palestinians since their displacement.”

Not mentioned in this report, but which should have been, is that the origins of the so-called “Naqba” were caused by a war of annihilation launched against the nascent Israeli state by neighbouring Arab armies. It was in 1948, that the Arabs refused to establish a state, side-by-side with the Jewish state, as per the Partition Plan. While Israel successfully fought off five united Arab armies, one of two fates awaited the Jews whose cities were captured by the Arabs: massacre or forced expulsion. This Arab-instigated war created a dual refugee problem with over 800,000 Jews being forcibly expelled from their homes in Arab and Muslim countries (they were successfully resettled in Israel and other countries), whereas the Arab world forced approximately 800,000 Palestinians to live in squalor in refugee camps, not granting them citizenship, equal rights, etc.).

The CBC’s report was marred by its failure to even briefly mention what caused the displacement of Palestinian Arabs and why they remain in such malaise. The CBC’s report at its core was unfair and certainly unbalanced.

HonestReporting Canada has called on CBC to take immediate corrective action to set the record straight. Stay tuned to this page for future updates.