The plight and flight of the Middle East’s Christian population is due almost exclusively to Muslim extremists who’ve persecuted Christians through the violent imposition of radical Islam.

Despite this, H.A. Hellyer, a senior associate fellow at the Royal United Services Institute in London and the Atlantic Council in Washington, wrote the following in a column published in the Globe and Mail on December 31: 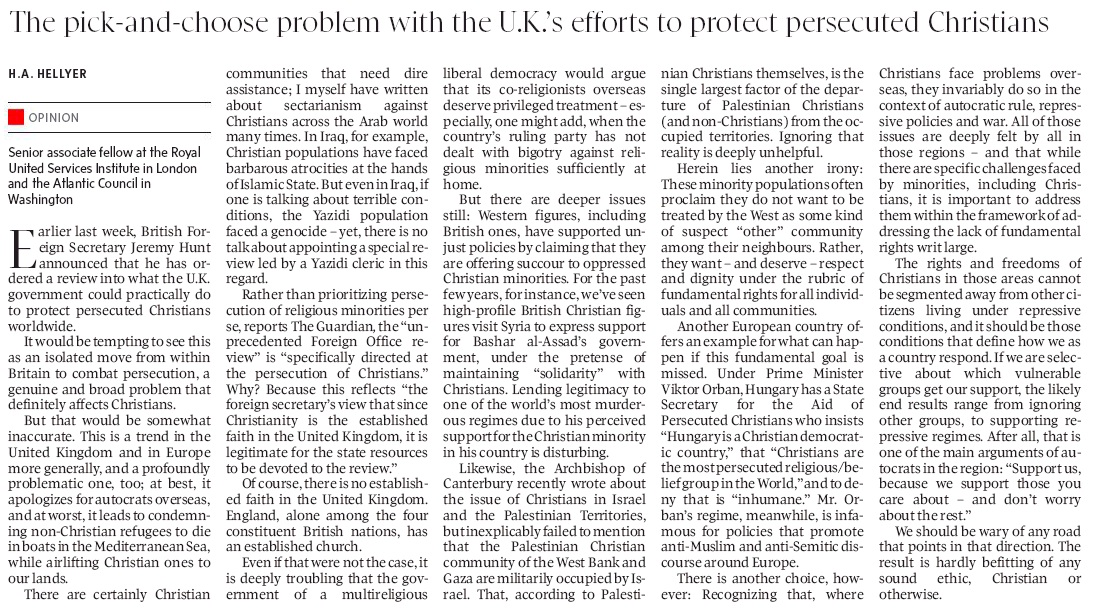 The Christian population in the west bank and Gaza is likely to continue to dissipate as a result of increasing Muslim persecution and maltreatment. When under Israeli control, Bethlehem’s Christian population grew by 57%, but has been depopulated of Christians under Palestinian Authority control. Pilgrims have been intimidated, Christian homes unlawfully seized and most noteworthy, the Church of the Nativity was occupied by gunmen in 2002 who looted it and used it as a latrine. Today, Christians comprise a mere one-fifth of this holy city’s population.

The U.S. State Department paints a grim picture of Hamas-run Gaza and the Palestinian Authority’s administration of the

west bank, citing institutionalized discrimination against the Christian minority. The trend goes the opposite way in Israel where the Christian community’s population has quadrupled since the creation of the modern state of Israel in 1948. 175,000 Christians live in Israel compromising 2% of the population with 77% of Israeli Christians being Arab.

Furthermore, while the author is entitled to his opinions, he’s not entitled to his own facts. Hellyer’s claiming that the Gaza Strip is “militarily occupied by Israel” is false. Israel unilaterally disengaged from Gaza in 2005, removing its 21 settlements and 8,500 settlers in a policy known as disengagement). In fact, the Globe and Mail recognizes that Israel does not occupy Gaza, most notably in this 2011 correction which reads:

“(Editor’s note: Israel ceased its occupation of Gaza in 2005. Incorrect information appeared in Wednesday’s Globe and in an earlier online version of this story. This version has been corrected.)”

HonestReporting Canada has already filed a complaint with the Globe and Mail about this commentary. Stay tuned to this page for future updates. If you would like to send a letter to the editor to the Globe and Mail, please send letters to: letters@globeandmail.com.

Importantly, let’s not be obtuse to the fact that Israel, in sharp contrast to the Arab world and the broader Middle East, is a safe haven for Christians, not its serial abuser.