The UK medical journal the Lancet has in the past been accused of having an anti-Israel bias. Our affiliate, HonestReporting.com and grassroots organizations like DARA (Doctors Against Racism and Anti-Semitism) have telegraphed the bias for quite some time.

A further example of this bias occurred on January 20, when Richard Horton, the editor of the Lancet proudly tweeting out the following slide taken from the Lancet Arab Health Series to his close to 10,000 followers: 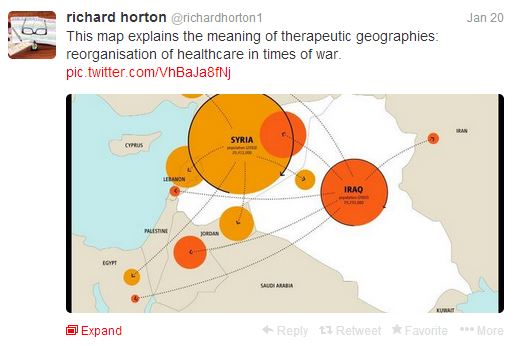 Why did the editor of a supposedly objective medical journal proudly circulate a map on Twitter that erases Israel and replaces it with “Palestine” in explaining how the refugees from Syria are being dispersed throughout the Mideast region?

Richard Horton issued the following Tweet following the release of our communique wherein he commits to issuing a correction: