UPDATE (February 7 and 22) The Kingston Whig-Standard published HRC’s rebuttal below on February 7 which responded to Louis Delvoie’s anti-Israel commentary which was tantamount to historical revisionism.

Our commentary entitled: “War create a dual refugee problem” was published on February 7. 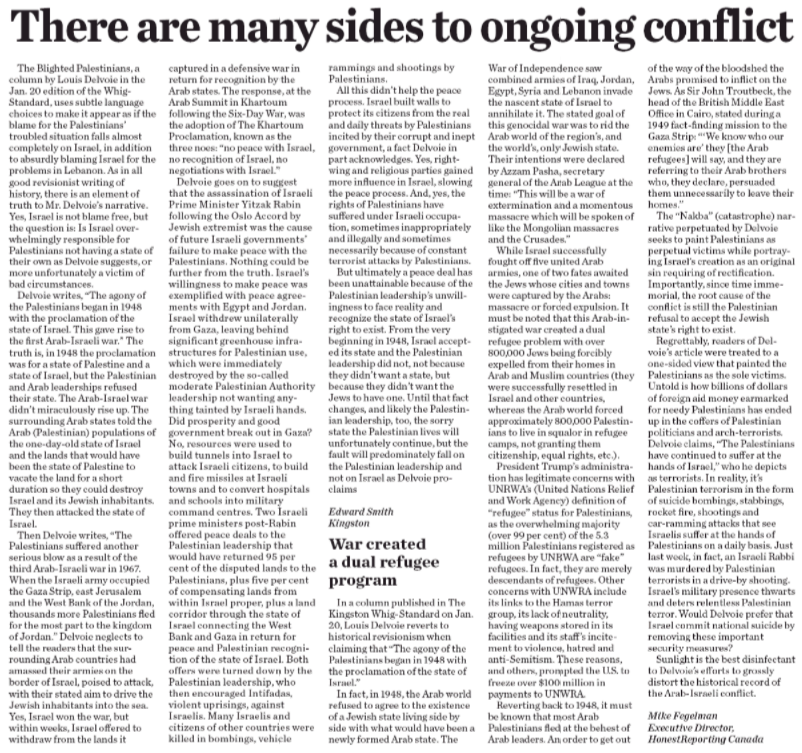 Subsequently, Louis Delvoie responded to our letter in a commentary of his own published by the Whig-Standard on February 15: 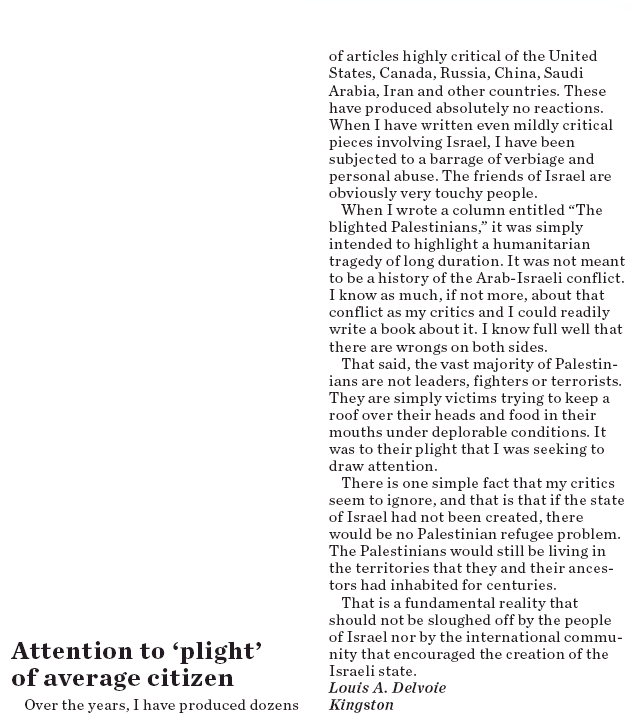 In response, Kingston native Leonard Harris rebutted Delvoie’s statement in a letter published by the Whig-Standard on February 21: 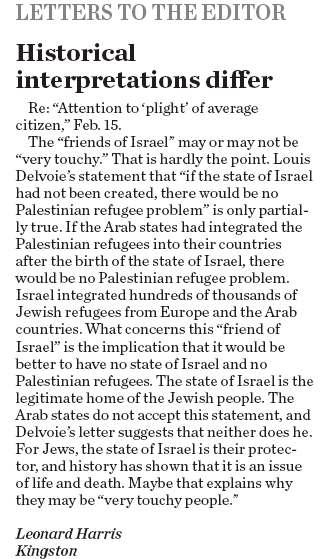 Importantly, sunlight is the best disinfectant to Delvoie’s anti-Israel efforts.

When baseless accusations are left unanswered, the risk is that they’ll become accepted as “conventional wisdom.” This is precisely what makes rhetoric the instrument of choice among Israel’s detractors.

In his latest Kingston Whig-Standard commentary published on January 20, Louis Delvoie reverts to historical revisionism when claiming that “The agony of the Palestinians began in 1948 with the proclamation of the state of Israel.” 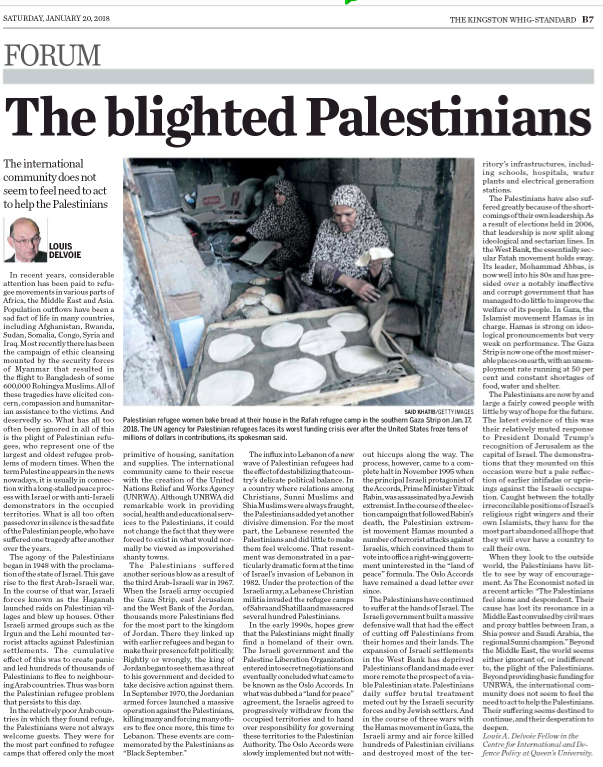 In fact, it was in 1948, that the Arab world refused to agree to the existence of a Jewish state living side-by-side with what would have been a newly-formed Arab state. The War of Independence in 1948 saw combined armies of Iraq, Jordan, Egypt, Syria and Lebanon invade the nascent state of Israel to annihilate it. The stated goal of this genocidal war was to rid the Arab world of the region’s, and the world’s, only Jewish state. Their intentions were declared by Azzam Pasha, Secretary-General of the Arab League at the time: “This will be a war of extermination and a momentous massacre which will be spoken of like the Mongolian massacres and the Crusades.”

While Israel successfully fought off five united Arab armies, one of two fates awaited the Jews whose cities and towns were captured by the Arabs: massacre or forced expulsion. It must be noted that this Arab-instigated war created a dual refugee problem with over 800,000 Jews being forcibly expelled from their homes in Arab and Muslim countries (they were successfully resettled in Israel and other countries, whereas the Arab world forced approximately 800,000 Palestinians to live in squalor in refugee camps, not granting them citizenship, equal rights, etc.). 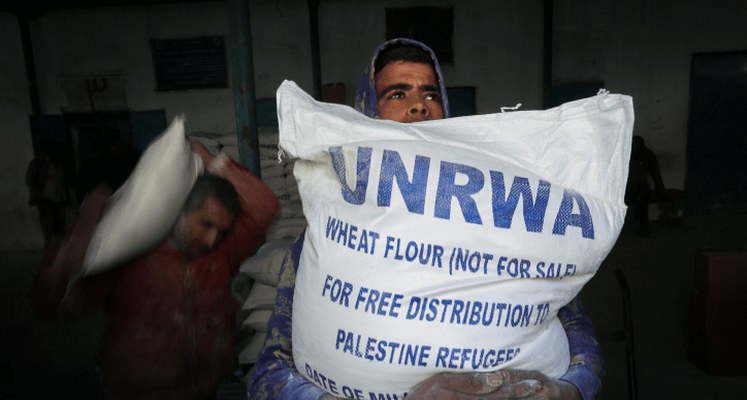 President Donald Trump’s administration has legitimate concerns with UNWRA’s (United Nations Work and Relief Agency) definition of “refugee” status for Palestinians, as the overwhelming majority (over 99%) of the 5.3 million Palestinians registered as refugees by UNRWA are “fake” refugees. In fact, they are merely descendants of refugees. Other issues with UNWRA include its links to the Hamas terror group, its lack of neutrality, having weapons stored in its facilities and its staff’s incitement to violence, hatred and anti-Semitism. These reasons, and others, prompted the U.S. to freeze over $100-million in payments to UNWRA.

Reverting back to 1948, it must be known that most Arab Palestinians fled at the behest of Arab leaders. An order to get out of the way of the bloodshed the Arabs promised to inflict on the Jews. As Sir John Troutbeck, the head of the British Middle East Office in Cairo, stated during a 1949 fact-finding mission to the Gaza Strip: “‘We know who our enemies are,’ they [the Arab refugees] will say, and they are referring to their Arab brothers who, they declare, persuaded them unnecessarily to leave their homes.” For the record, Israel lost almost 1% of its population as over 6,000 Israelis were killed in the costliest of all of Israel’s wars.

The “Nakba” (catastrophe) narrative perpetuated by Delvoie seeks to paint Palestinians as perpetual victims while portraying Israel’s creation as an original sin requiring of rectification. Importantly, since time immemorial, the root cause of the conflict is still the Palestinian refusal to accept the Jewish state’s right to exist.

Delvoie fails to acknowledge that Israel is the rightful homeland of the Jewish people. He also fails to mention that combined Arab armies in 1967 sought to effectively wipe Israel from the map. In a war of self-defense, Israel took over the west bank (also known as Judea and Samaria – the ancestral Jewish homeland) during the Six Day War which was aggressively launched against the Jewish state by Egypt, Syria, and Jordan. The true “occupiers” of the west bank were the Jordanians who controlled the land until 1967 following their previous attempt to destroy the nascent state of Israel in 1948. Jordan had no legal claim to the land, nor did a state of “Palestine” ever exist. The Ottoman Empire and the British Mandate were the past administrators of the land making this matter fundamentally disputed and not occupied.

In his polemic, Delvoie fundamentally erases from the historical record a continuous 3,000+ year Jewish presence in what was called until a few decades ago “Judea and Samaria.” Jews have never ceded their rights and importantly, you can’t occupy your own home. He also fails to address how UN Security Council Resolution 242 authorizes Israel, having conquered the land in a defensive war, to remain in possession of the territories. According to Resolution 242, when “a just and lasting peace in the Middle East” is achieved, Israel can withdraw to ‘secure and recognized boundaries’”.

Because no legal determination has ever been made as to their sovereignty, neither the territories nor the settlements are in breach of international law. Thus, the often– but wrongly– used term “occupied Palestinian territories” has no basis whatsoever in law or fact.

Regrettably, readers of Delvoie’s article were treated to a one-sided view that painted the Palestinians as the sole victims. Untold is how billions of dollars of foreign aid money earmarked for needy Palestinians has ended up in the coffers of Palestinian politicians and arch-terrorists. Delvoie claims “The Palestinians have continued to suffer at the hands of Israel” who he depicts as terrorists. In reality, it’s Palestinian terrorism in the form of suicide bombings, stabbings, rocket fire, shootings, and car ramming attacks that see Israelis suffer at the hands of Palestinians on a daily basis. Just last week in fact, an Israeli Rabbi was murdered by Palestinian terrorists in a drive-by shooting. Israel’s military presence thwarts and deters relentless Palestinian terror. Would Delvoie prefer that Israel commit national suicide by removing these important security measures? (Easy for him to say from his perch in Kingston).

Mideast peace remains elusive today as Arab rejectionism continues in the form of the infamous “three no’s” declared at the Arab Summit’s Khartoum Resolution of 1967: no peace with Israel, no negotiations with Israel and no recognition of Israel.

Sunlight is the best disinfectant to Delvoie’s efforts to grossly distort the historical record of the Arab-Israeli conflict.