In an op-ed published in the Saltwire newspaper the PEI Guardian today, HRC Marketing and Community Relations Associate, Robert Walker, argued that Jews have never lost their desire to return to their ancestral homeland.

Walker also pointed out that: “Peace will only come when the Palestinian leadership accepts Israel’s right to exist as a Jewish state, and accepts Israel’s manifold peace offers, every one of which has been spurned. The world, and the Canadian news media, must demand better.”

The full op-ed can be read online on The Guardian’s website or otherwise it can be found below: 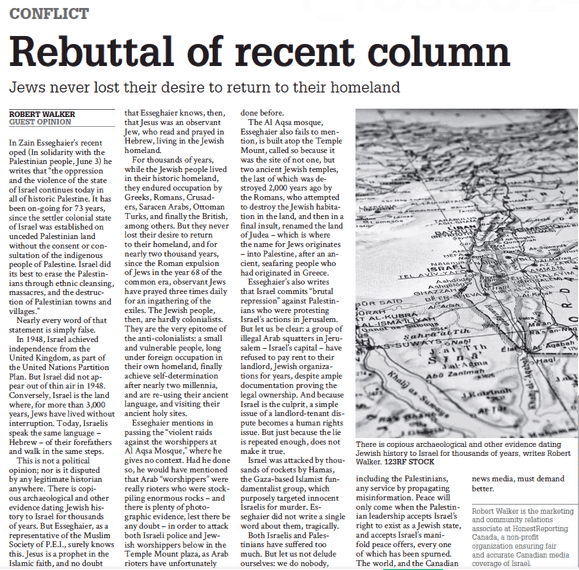 In Zain Esseghaier’s recent oped (In solidarity with the Palestinian people, June 3) he writes that “the oppression and the violence of the state of Israel continues today in all of historic Palestine. It has been on-going for 73 years, since the settler colonial state of Israel was established on unceded Palestinian land without the consent or consultation of the indigenous people of Palestine. Israel did its best to erase the Palestinians through ethnic cleansing, massacres, and the destruction of Palestinian towns and villages.”

Nearly every word of that statement is simply false.

In 1948, Israel achieved independence from the United Kingdom, as part of the United Nations Partition Plan. But Israel did not appear out of thin air in 1948. Conversely, Israel is the land where, for more than 3,000 years, Jews have lived without interruption. Today, Israelis speak the same language – Hebrew – of their forefathers and walk in the same steps. This is not a political opinion; nor is it disputed by any legitimate historian anywhere. There is copious archaeological and other evidence dating Jewish history to Israel for thousands of years. But Esseghaier, as a representative of the Muslim Society of P.E.I., surely knows this. Jesus is a prophet in the Islamic faith, and no doubt that Esseghaier knows, then, that Jesus was an observant Jew, who read and prayed in Hebrew, living in the Jewish homeland.

For thousands of years, while the Jewish people lived in their historic homeland, they endured occupation by Greeks, Romans, Crusaders, Saracen Arabs, Ottoman Turks, and finally the British, among others. But they never lost their desire to return to their homeland, and for nearly two thousand years, since the Roman expulsion of Jews in the year 68 of the common era, observant Jews have prayed three times daily for an ingathering of the exiles. The Jewish people, then, are hardly colonialists. They are the very epitome of the anti-colonialists: a small and vulnerable people, long under foreign occupation in their own homeland, finally achieve self-determination after nearly two millennia, and are re-using their ancient language, and visiting their ancient holy sites.

Esseghaier mentions in passing the “violent raids against the worshippers at Al Aqsa Mosque,” where he gives no context. Had he done so, he would have mentioned that Arab “worshippers” were really rioters who were stockpiling enormous rocks – and there is plenty of photographic evidence, lest there be any doubt – in order to attack both Israeli police and Jewish worshippers below in the Temple Mount plaza, as Arab rioters have unfortunately done before.

The Al Aqsa mosque, Esseghaier also fails to mention, is built atop the Temple Mount, called so because it was the site of not one, but two ancient Jewish temples, the last of which was destroyed 2,000 years ago by the Romans, who attempted to destroy the Jewish habitation in the land, and then in a final insult, renamed the land of Judea – which is where the name for Jews originates – into Palestine, after an ancient, seafaring people who had originated in Greece.

Esseghaier’s also writes that Israel commits “brutal repression” against Palestinians who were protesting Israel’s actions in Jerusalem. But let us be clear: a group of illegal Arab squatters in Jerusalem – Israel’s capital – have refused to pay rent to their landlord, Jewish organizations for years, despite ample documentation proving the legal ownership. And because Israel is the culprit, a simple issue of a landlord-tenant dispute becomes a human rights issue. But just because the lie is repeated enough, does not make it true.

Israel was attacked by thousands of rockets by Hamas, the Gaza-based Islamist fundamentalist group, which purposely targeted innocent Israelis for murder. Esseghaier did not write a single word about them, tragically.

Both Israelis and Palestinians have suffered too much. But let us not delude ourselves: we do nobody, including the Palestinians, any service by propagating misinformation. Peace will only come when the Palestinian leadership accepts Israel’s right to exist as a Jewish state, and accepts Israel’s manifold peace offers, every one of which has been spurned. The world, and the Canadian news media, must demand better.