In the Hill Times today, HRC comments on a recent report issued by Statistics Canada which once again, listed Canada’s Jewish population as the number one recipient of religiously motivated hate crimes. 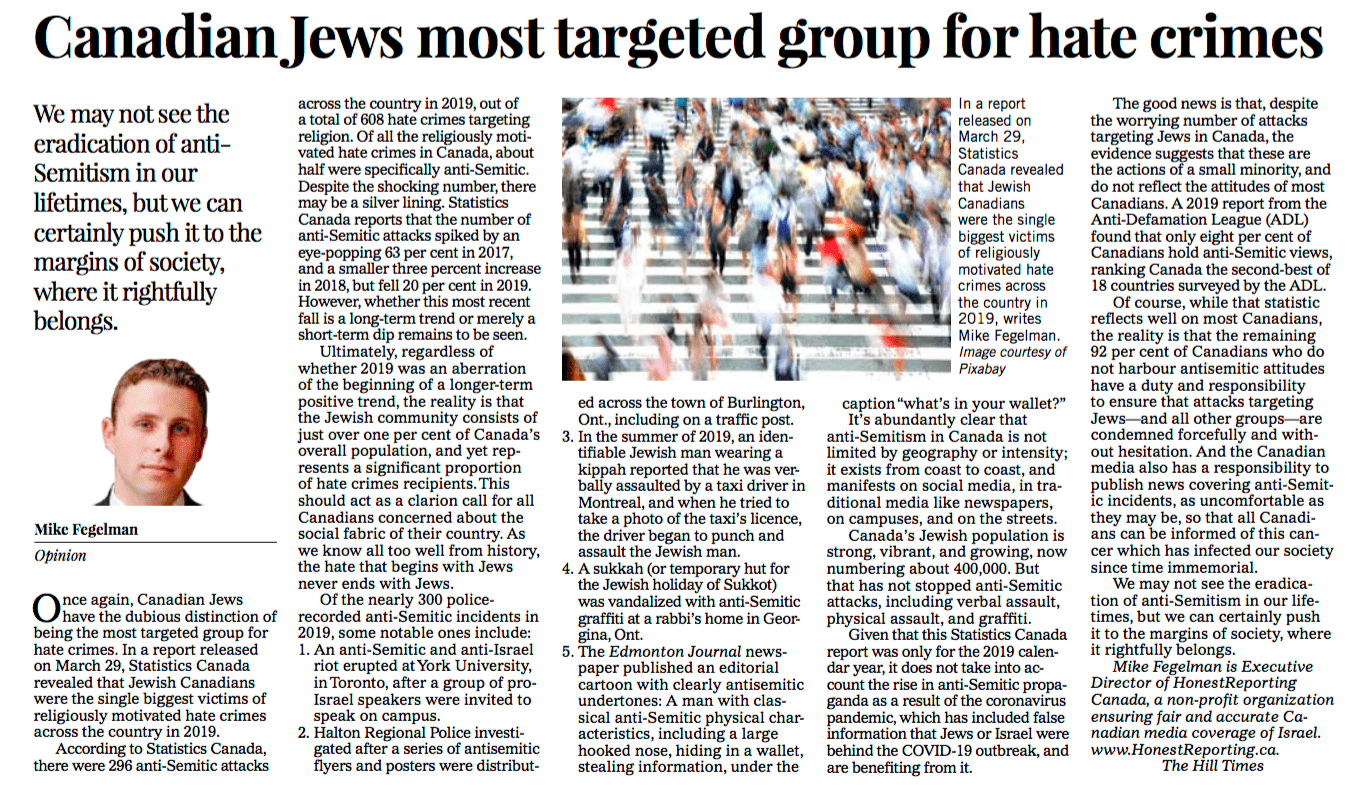 Once again, Canadian Jews have the dubious distinction of being the most targeted group for hate crimes. In a report released on March 29, Statistics Canada revealed that Jewish Canadians were the single biggest victims of religiously motivated hate crimes across the country in 2019.

According to Statistics Canada, there were 296 antisemitic attacks across the country in 2019, out of a total of 608 hate crimes targeting religion. Of all the religiously motivated hate crimes in Canada, about half were specifically antisemitic. Despite the shocking number, there may be a silver lining. Statistics Canada reports that the number of antisemitic attacks spiked by an eye-popping 63 percent in 2017, and a smaller three percent increase in 2018, but fell 20 percent in 2019. However, whether this most recent fall is a long-term trend or merely a short-term dip remains to be seen.

Ultimately, regardless of whether 2019 was an aberration of the beginning of a longer-term positive trend, the reality is that the Jewish community consists of just over one percent of Canada’s overall population, and yet represents a significant 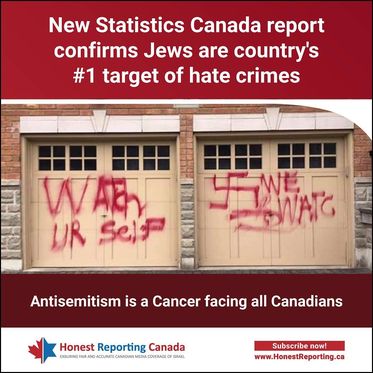 proportion of hate crimes recipients. This should act as a clarion call for all Canadians concerned about the social fabric of their country. As we know all too well from history, the hate that begins with Jews never ends with Jews.

Of the nearly 300 police-recorded antisemitic incidents in 2019, some notable ones include:

An antisemitic and anti-Israel riot erupted at York University, in Toronto, after a group of pro-Israel speakers were invited to speak on campus.

Halton Regional Police investigated after a series of antisemitic flyers and posters were distributed across the town of Burlington, Ontario, including on a traffic post.

In the summer of 2019, an identifiable Jewish man wearing a kippah reported that he was verbally assaulted by a taxi driver in Montreal, and when he tried to take a photo of the taxi’s license, the driver began to punch and assault the Jewish man.

A sukkah (or temporary hut for the Jewish holiday of Sukkot) was vandalized with antisemitic graffiti at a rabbi’s home in Georgina, Ontario.

The Edmonton Journal newspaper published an editorial cartoon with clearly antisemitic undertones: A man with classical antisemtic physical characteristics, including a large hooked nose, hiding in a wallet, stealing information, under the caption “what’s in your wallet?”

It’s abundantly clear that antisemitism in Canada is not limited by geography or intensity; it exists from coast-to-coast, and manifests on social media, in traditional media like newspapers, on campuses, and on the streets.

Canada’s Jewish population is strong, vibrant, and growing, now numbering about 400,000. But that has not stopped antisemitic attacks, including verbal assault, physical assault, and graffiti.

Given that this Statistics Canada report was only for the 2019 calendar year, it does not take into account the rise in antisemitic propaganda as a result of the coronavirus pandemic, which has included false information that Jews or Israel were behind the Covid 19 outbreak, and are benefiting from it.

The good news is that, despite the worrying number of attacks targeting Jews in Canada, the evidence suggests that these are the actions of a small minority, and do not reflect the attitudes of most Canadians. A 2019 report from the Anti-Defamation League (ADL) found that only eight percent of Canadians hold antisemitic views, ranking Canada the second-best of 18 countries surveyed by the ADL.

Of course, while that statistic reflects well on most Canadians, the reality is that the remaining 92 percent of Canadians who do not harbour antisemitic attitudes have a duty and responsibility to ensure that attacks targeting Jews – and all other groups – are condemned forcefully and without hesitation. And the Canadian media also has a responsibility to publish news covering antisemitic incidents, as uncomfortable as they may be, so that all Canadians can be informed of this Cancer which has infected our society since time immemorial.

We may not see the eradication of antisemitism in our lifetimes, but we can certainly push it to the margins of society, where it rightfully belongs.