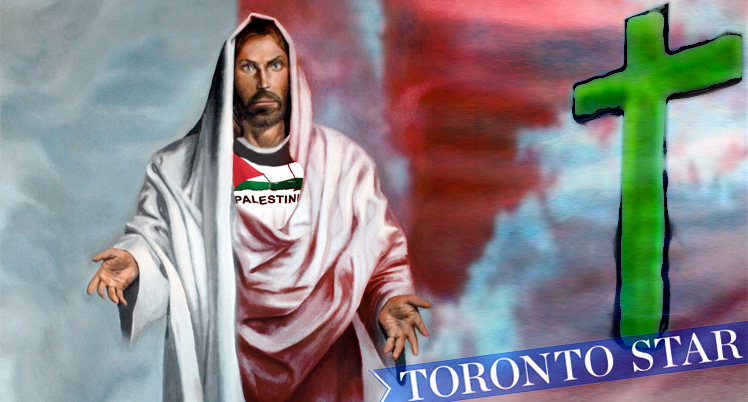 Following HonestReporting Canada’s communiqué calling attention to a column in the Toronto Star on October 20  which indulged in historical revisionism with the statement: “Why are ‘good’ Christians so irredeemably more racist than their cousins outside the church? Incidentally, Jesus, the Palestinian, didn’t have blue eyes”, the International Christian Embassy of Jerusalem published HRC’s communiqué and its own responses to Toronto Star columnist Ken Gallinger.

RE: A one-liner from Ken Gallinger: “Jesus, the Palestinian, didn’t have blue eyes.”

In a pathetic effort to ingratiate themselves to the leading lights of the Muslim culture around them, Palestinian Christians signed up long ago to promote the fantasy of the aboriginal presence of Palestinians in the Holy Land and have got used to cheering loudly as statesmen of the Palestine Authority insist that there never was a Jewish nation of Israel in Ancient times, no Temple, no traces of the Hebrew language, and other patent absurdities massively discredited every day by archeologists.

An example that has gained some currency in church circles comes from March, 2012, the Christ at the Checkpoint Conference, held at Bethlehem Bible college in march, 2012, where Mitri Raheb, the Lutheran Pastor of the Christmas Church in Bethlehem, proclaimed: I’m sure if we were to do a DNA test between David … and Jesus … and Mitri [himself], born just across the street from where Jesus was born, I’m sure the DNA will show that there is a trace. While, if you put King David, Jesus and Netanyahu, you will get nothing, because Netanyahu comes from an East European tribe who converted to Judaism in the Middle Ages …. I always loved to say that most probably one of my grand, grand, grand, grandmas used to babysit Jesus.

Ratrb’s mind-boggling stew of racist triumphalism, claiming without an iota of evidence sanction of the most up-to-date science and couched in shameless anti-history, was met with glee by the audience of visiting pastors, theologians and church activists from Europe and North America. No one seemed at all bothered by the illogicality of all of this. Even assuming the presence of some ancestor of Mitri Raheb in the local population (for which there is no documentary proof) when the Arabs arrived in the Seventh Century CE and assuming also some early intermixture of that man’s DNA with locals, such activity does not take us anywhere near the lifetime of Jesus, who the Christian gospels and all the earliest sources insist was, as a human person, of unmixed Jewish origin – as were all of his Disciples and all of the members of the Early Church for at least a decade thereafter.

Gallinger’s synopsis of this line of thought is: “Incidentally, Jesus the Palestinian didn’t have blue eyes.” Of course He didn’t have blue eyes. He was a Jew. It is only because of the low level of respect for historical fact in our educational system and among our academic élites that a major newspaper like the Star would stoop to promoting this idiocy.

Re: Religious racism: Are ‘good’ Christians more racist than others?

The image of Jesus presented as a Palestinian does not reflect an issue onto itself as in the Christian faith, as He is a representative of all humans, regardless of race or country of origin. However, Scripture is clear about the Jewish genealogy of Jesus (Yeshua in Hebrew) being traced to the root and offspring of King David, born in the City of David which is in Bethlehem, now governed by the Palestinian Authority. In the Christian tradition Jesus is the “Prince of Peace” who advocates reconciliation, not propaganda, fueled by proponents of a political faction. Furthermore, the recognition of Jesus as a Jew according to Christian faith and tradition traces back to the biblical heartlands and advanced into Egypt in the early part of the first century AD as can be historically followed back through the ancient Christian Copts to the Patriarch of Alexandria, following the martyrdom of St. Mark. Presenting or alluding to Jesus as a symbol of a white “blue eyed” construct of European colonialism serves as an obstacle to reconciliation and is factually limited. Any racism that exists within the Church is a separate issue that needs to be addressed.