Israel Is An Imperfect Country, But A Vibrant...
Why Are Anti-Israel Activists So Afraid of The...
McGill Tribune Publishes Op-Ed Calling for a Boycott...
Ontario Arabic Paper’s Editor Downplays Holocaust; Meshwar Describes...
How the War in Ukraine is Having a...
Toronto Star Columnist Shree Paradkar Wrongly Claims IHRA...
After Vancouver Adopts IHRA, CBC Radio Interviews Fringe...
Qatar Prepares For The 2022 World Cup: Will...
Lawfare: Who is Using the Law More Effectively?...
Official Publication of the College of Physicians and...
Home Media Action Alerts2022 Israeli-Saudi Relations: Sowing The Seeds Of Peace, HRC Op-Ed In National Post 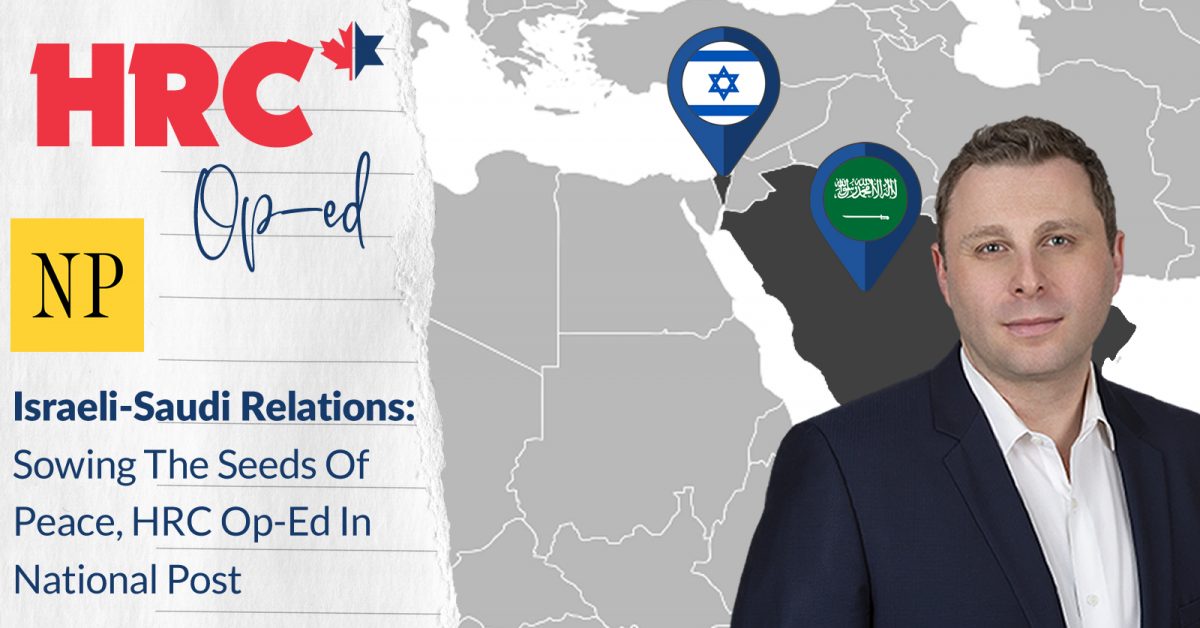 After years of behind-the-scenes and below-the-surface relations between Israel and Saudi Arabia, improved ties between the two countries are expected to be front and centre with an anticipated announcement by US President Joe Biden during his upcoming visit to the Saudi city of Jeddah.

While bilateral relations between the Jewish State and the Islamic kingdom have been quiet, reports suggest that they are about to become much more public, which represents opportunities not just for the people in both countries, but for many others in the region and worldwide, who may benefit from the results of such a fruitful relationship.

On July 15, the National Post prominently published an important commentary by HRC Executive Director Mike Fegelman entitled: “Promising signs of normalizing relations between Saudi Arabia and Israel”. It details how the traditionally frosty relationship between the Israelis and the Saudis is showing signs of thaw. The full op-ed can be found below.

In recent years, Israel has enjoyed improved relationships with Muslim-majority countries throughout the Middle East, Africa and Europe. In addition to the Abraham Accords, under which Israel signed peace treaties with Bahrain and the United Arab Emirates (UAE), it also expanded its diplomatic relations with countries such as Morocco, Sudan and Kosovo.

But despite the significance of these relationships, there is one country, which is widely recognized as one of the most influential Islamic countries in the world, that the Jewish state has not yet entered into formal diplomatic relations with: the Kingdom of Saudi Arabia.

With 35 million inhabitants, Saudi Arabia is far from the largest Muslim-majority country. Its significance comes both from its status as the custodian of Islam’s two holiest sites, Mecca and Medina, as well as its geopolitical role as a major 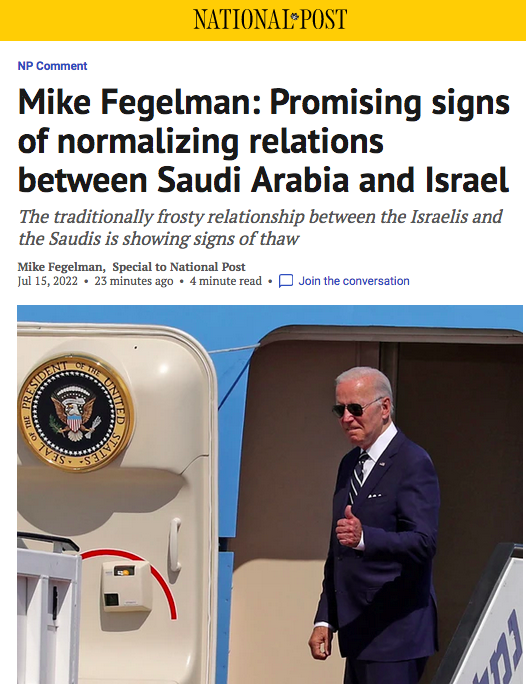 petroleum-exporting country and a rival of the Islamic Republic of Iran.

However, the traditionally frosty relationship between the Israelis and the Saudis is showing signs of thawing.

In remarks made to journalists on July 11, Idan Roll, Israel’s deputy foreign minister, said that diplomatic relations between Israel and Saudi Arabia won’t happen overnight, but that an announcement will be made when U.S. President Joe Biden is in Saudi Arabia.

On Friday, Biden boarded the first direct flight taken by an American president from Israel to Jeddah, Saudi Arabia, after it was announced that Israeli planes would be allowed to enter Saudi airspace as part of a deal that will be made public over the weekend. According to the deal, Saudi Arabia is also expected to permit direct charter flights to and from Israel for Muslims participating in the annual hajj pilgrimage in Mecca.

The deal is not likely to include a full normalization of diplomatic relations, at least not yet, but could provide a good start to future negotiations. Over the past few years, dealings between the two countries — while largely quiet and carried out through covert diplomacy — have grown significantly.

During the 2014 war between Hamas and Israel, media reports suggested that Israel and Saudi Arabia were in close contact. And while the Saudis were quick to downplay any formal relations, in a 2015 press release, the Saudi Embassy in the United Kingdom quoted its ambassador as saying that, “Dealings by the Kingdom of Saudi Arabia with Israel have been limited to attempts to bring about a plan for peace.”

Signs of peace haven’t just been limited to formal diplomatic relations, though. In 2018, Air India’s commercial routes between New Delhi and Tel Aviv received Saudi approval for the first time to fly through the kingdom’s airspace. Previously, flights heading to Israel were forced to circumvent Saudi territory. Notably, that change was announced not by Saudi Arabia, but by then-Israeli prime minister Benjamin Netanyahu.

While there have thus far been no formal announcements from the Saudi government on expanding relations with Israel — aside from Friday’s announcement, which didn’t mention Israel by name, that the kingdom would be opening its airspace to “all air carriers” — there have been a number of recent signs pointing to warmer ties.

In March, Saudi state media reported that Crown Prince Mohammed bin Salman had described Israel as a “potential ally, with many interests that we can pursue together.” In May, Israeli media reported that a group of Israeli business people had visited Saudi Arabia to discuss investments between the two countries.

Most recently, the Saudi magazine Al-Majallah published a front-page article in its July edition positively covering a story of Arab-Israelis volunteering in the Israel Defence Forces. Publishing such an article without the government’s approval would be unthinkable.

While there have been ongoing secret ties between the two countries for a number of years, only recently has the relationship began to move out into the open.

Numerous commentators have claimed that Israel’s peace deal with Bahrain was enabled thanks to Saudi Arabia’s tacit blessing. As well, the mutual concern both Israel and Saudi Arabia have over the Iranian regime, specifically related to its nuclear program, is seen as an impetus for closer ties.

Both countries opposed the Iran nuclear deal, deeming it insufficient to prevent the Islamic republic from acquiring nuclear weapons. And in addition to funding and arming anti-Israel terrorist groups like Hamas and Hezbollah, Iran has also heavily armed the Houthis, a group fighting Saudi Arabia in Yemen. As the saying goes, the enemy of my enemy is my friend.

No longer an open secret, the Saudi monarchy is finally, albeit not yet completely, moving its relations with Israel from behind closed doors, not only because of the Iranian threat, but because of the promise that closer ties with Israel, including intelligence sharing and business opportunities, offer to Saudi Arabia.

Israel is widely recognized as the “startup nation,” and a leader in technology, R&D, cybersecurity and more. Israel is also a world leader in reusing waste water, a key issue for the desert nation of Saudi Arabia.

While any evaluation of a pending relationship must factor in and scrutinize Saudi Arabia’s poor human rights record, as the Jewish state expands its ties with Saudi Arabia, the birthplace of Islam and the home of its holiest sites, there is tremendous promise not just for the people of both countries, but for many others who may benefit from the results of such a fruitful relationship.