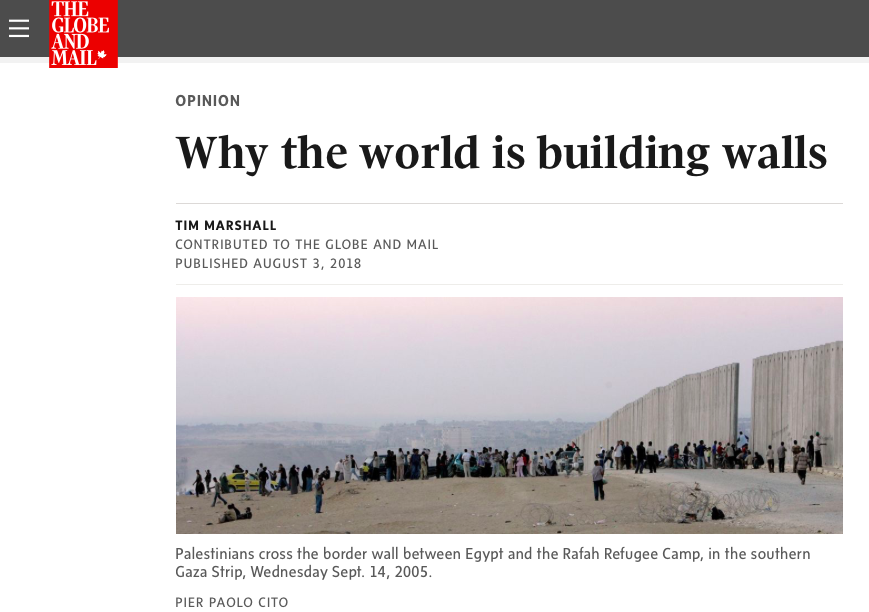 On August 3, the Globe and Mail published a commentary by Tim Marshall entitled: “Why the world is building walls” which featured several provocative photos, one of the border wall between Egypt and the Rafah Refugee Camp, in the southern Gaza Strip, while the commentary itself led by stating the following (emphasis added):

The border wall between Israel and the West Bank is among the most forbidding and hostile in the world. Viewed from up close, whichever side you find yourself on, it rears up from the ground, overwhelming and dominating you. Faced by this blank expanse of steel and concrete, you are dwarfed not only by its size but by what it represents. You are on one side; “they” are on the other.”

It continued by saying:

The divisions between Israel and Palestine are well established, but with so many further subdivisions within each population it is almost impossible to try to agree upon a solution. Religious and ethnic divisions also spark violence across the Middle East, highlighting the key struggle between Shia and Sunni Muslims – each incident is the result of complex factors, but much of it comes down to religion, especially the regional rivalry between Saudi Arabia and Iran.”

Importantly, Marshall’s commentary altogether failed to mention the reason the barrier was erected which was in the backdrop of relentless Palestinian terror in the form of suicide bombings and sniper shootings.

Responding to Marshall’s op-ed, Nimrod Barkan, Israel’s Ambassador to Canada, submitted the following letter to the editor which was published in the August 10 edition of the Globe and Mail:

Re Up Against The Wall (Opinion, Aug. 3): I deeply regret the distortions regarding the nature and purpose of Israel’s security barrier as presented in Tim Marshall’s article. The barrier between Israel and the West Bank is not a concrete wall, but 95 per cent fence. It was not erected for the purpose of controlling migration (as was inferred by the article), but rather as a means of preventing the wave of suicide bombings and sniper fire perpetrated by Palestinian terrorists during the Second Intifada (2000-2006).

In September, 2000, Palestinian leader Yasser Arafat betrayed the Israeli peace initiative. In an effort to pressure Israel, Mr. Arafat believed that a terror campaign against Israelis would force Jerusalem to give up more ground during negotiations, which were then taking place in Taba, Egypt.

What ensued were five years of terrorism and suicide bombings that claimed the lives of more than 1,000 Israeli civilians – women, men, and children – as well as more than 40 foreign civilians. From the population centres in the West Bank, terrorists only had to walk a dozen kilometres to reach Israeli cities and towns, blowing themselves up in cafés, buses, shopping malls, and even private homes.

The barrier should be lauded for successfully reducing terrorism (specifically suicide bombings). It has saved the lives of Israelis, Jews and Arabs alike, and should not be misconstrued in order to fit a preconceived concept or narrative as was done by the author. Mr. Marshall would be well served by looking into the nature and purpose of Israel’s security barrier with the West Bank. 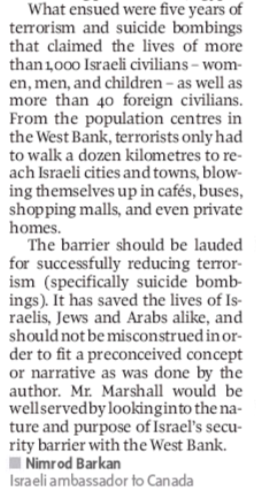