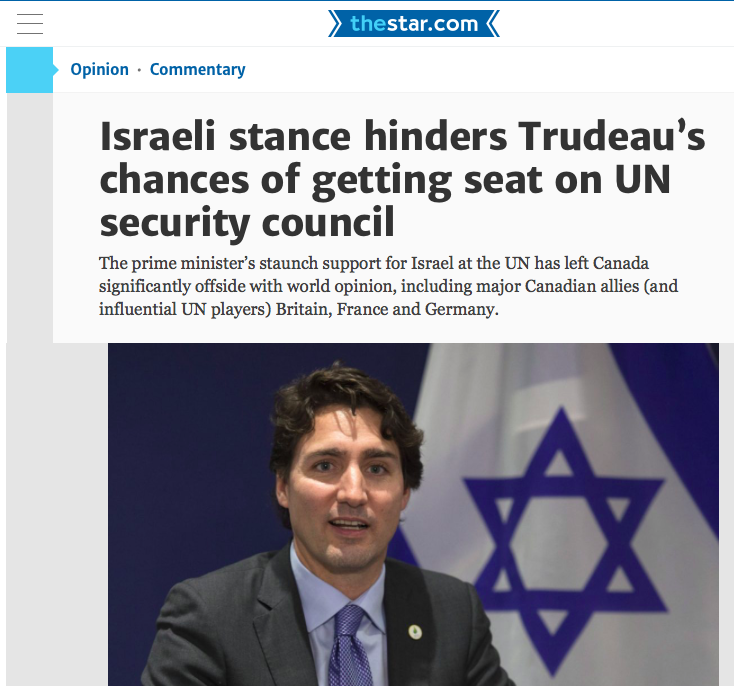 Whether Canada should lobby for a seat at the United Nations Security Council (UNSC) is a legitimate matter for debate.

The Liberal Government supports engaging in multilateral organizations like the UN to further Canada’s foreign policy interests, while the previous governing Conservatives had argued that Canada doesn’t need a spot on the Council to have a place in the world.

In 2013, former Canadian Foreign Affairs Minister John Baird proclaimed in the House of Commons that “Canada’s principled foreign policy is not for sale for a Security Council seat.”

By that, Baird was implicitly declaring that Canada would not make Israel a sacrificial lamb to secure a seat at the Security Council.

In 2010, Canada failed to win a seat at the UN – that coveted spot went to Portugal. The Canadian Press reported at the time that “Many considered the loss a direct consequence of Canada’s foreign-policy approach to the Middle East and support for Israel.”

However, others, including prominent commentator David Frum, argued that there’s no proof that Canadian support for Israel even played a role in Canada not securing a seat at the UNSC. Frum stated the following in a 2010 op-ed in the National Post:

“These statements are self-interested and polemical — and also reveal a weak understanding of the workings of the United Nations.

The Security Council has 10 temporary members, each serving a two-year term. Theoretically, those 10 temporary members are elected by the General Assembly by secret ballot. In the first round of balloting on October 12, Canada received 114 votes, 13 votes short of the two-thirds majority needed to win.

And yes, in that balloting, it’s very possible that the Islamic bloc at the UN voted for Portugal over Canada. But it’s not the voting that matters at the UN. It’s the nominations.” 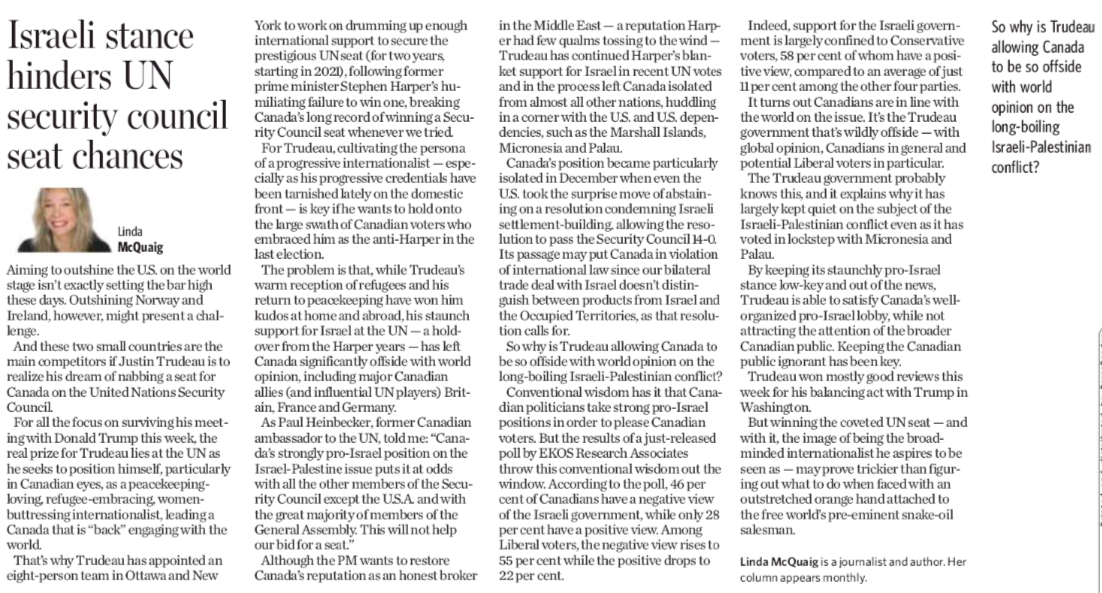 McQuaig argued that “The problem is that, while Trudeau’s warm reception of refugees and his return to peacekeeping have won him kudos at home and abroad, his staunch support for Israel at the UN — a holdover from the Harper years — has left Canada significantly offside with world opinion, including major Canadian allies (and influential UN players) Britain, France and Germany.”

Abetted by the platform given to her by the Toronto Star, McQuaig said that (emphasis added): “By keeping its staunchly pro-Israel stance low-key and out of the news, Trudeau is able to satisfy Canada’s well-organized pro-Israel lobby, while not attracting the attention of the broader Canadian public.”

In other words, Canadian support for Israel is meant to placate Canada’s pro-Israel lobby.

Linda McQuaig has never been shy about her disdain for Israel. Commentator Richard Klagsbrun described her as “a hopelessly biased polemicist who notoriously likened Israel’s killing of 9 armed jihadis who expressed a desire for martyrdom on the Mavi Marmara to the murder of an innocent Jewish American by Palestinian terrorists on the Achile Lauro.”

On February 22, 2016, McQuaig defended the BDS movement in a smear attack against Israel in the Toronto Star. McQuaig argued that “Elizabeth May shouldn’t run away from BDS” but should instead embrace it. McQuaig’s op-ed smeared Israel as an “apartheid” state and falsely claimed that Israel still “occupies” Gaza (it most certainly doesn’t as it disengaged its soldiers, destroyed all settlements and removed all 8,500 settlers in 2005).

Importantly, Prime Minister Trudeau’s principled support for Israel is deserving of praise, not opprobrium by Linda McQuaig. Trudeau’s standing with Israel and confronting systemic bias at the United Nations, condemning the boycott, divestment and sanctions (BDS) movement, and deploring the pernicious rise of antisemitism, should be lauded – not lamented.

Whether or not there is merit to Canada securing a seat at the United Nations Security Council, the idea that Israel should be thrown under the bus simply to get a seat, is appalling and is unbecoming of a columnist at Canada’s largest daily newspaper.