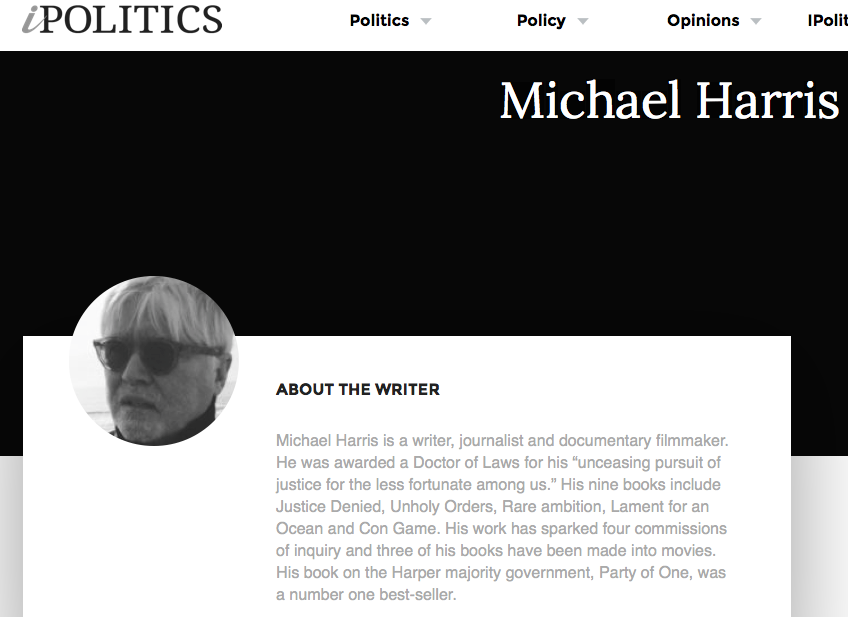 Writing in IPolitics on November 6, commentator Michael Harris wrote a screed about Governor General David Johnston’s recent trip to Israel, the west bank and Jordan. In Harris’ words, “Canada’s ‘Grandpa Book’ helps us regain our reputation as an honest broker in the Middle East”.
In his commentary, Harris lauded Michael Lynk (the newly-appointed UN Special Rapporteur on Human Rights int he Occupied Palestinian Territories) as “a brilliant legal mind, is an independent expert appointed by the United Nations Human Rights Council.”
What Michael Harris conveniently overlooked is that according to the Centre for Israel and Jewish Affairs (CIJA): “Lynk has been significantly involved in anti-Israel advocacy in Canada. This has included signing anti-Israel petitions, calling for Israel to be prosecuted for “war crimes”, accusing Israel of “ethnic cleansing”, addressing “one-state” conferences (which call for the end of Israel), and serving as a leader in CEPAL – a group that promotes Israeli Apartheid Week.”
Additionally, in his application to be considered for this UN position, UN Watch contends that Lynk failed to disclose his board membership on three pro-Palestinian organizations. In a press release on October 27, UN Watch asserted the following:
“The UN should suspend today’s scheduled UN General Assembly presentation by the purported new UN special rapporteur charged with investigating “Israel’s violations of the principles and bases of international law” because his application failed to disclose his leadership role in three pro-Palestinian organizations, said a Geneva-based monitoring group today.

In a letter complaint filed with the UN secretary-general and legal counsel, UN Watch called for Michael Lynk to be suspended pending a review of his appointment as requested in March by Canadian Foreign Minister Stéphane Dion.

Lynk is slated to appear before the UNGA’s Third Committee between 3 to 6 pm today, and to present his first report on alleged Israeli violations.”

Harris claimed that: “In his report, Lynk stressed: ‘Violent attacks of any kind are unacceptable.’ He noted many of the attacks were committed by minors, ‘those working in the Occupied Palestinian Territory consistently noted a sense of desolation and desperation among children manifesting itself not only in violent outbursts but also in psychological and physical ailments such as bed-wetting, anxiety and depression.'”
Importantly, there’s no justification for carrying out terror attacks against innocent Israeli citizens. There are children and individuals all over the world who are downtrodden, who have various ailments and who live in poverty, but they do not stab and shoot innocents. Only people who have been incited to hate and indoctrinated to murder innocent, men, women and children commit terror.