In response to a December 10 Gwynne Dyer op-ed published in the Waterloo Record and Hamilton Spectator which argued that Iran doesn’t pose a “mortal threat” to Israel, HRC Executive Director Mike Fegelman’s rebuttal was published in both papers arguing that:

Irrespective of whether or not Israel possesses nuclear weapons, it’s simply absurd for Gwynne Dyer to equate democratic Israel with the terror-supporting, Holocaust-denying theocratic Iranian regime. Israel has never tested, used or threatened the use of nuclear weapons, has called for the creation of a nuclear-free zone in the Middle East and has stated many times that it will not be the first state to introduce nuclear weapons into the region. Iran’s destructive pursuit of nuclear weapons, repeated calls for Israel’s annihilation, and its deplorable human-rights record have rightfully made this country an outcast in the international community.

Dyer cavalierly says that: “a few Iranian nuclear weapons are not a mortal threat to Israel.” Contrary to Dyer’s suggestions, tiny Israel — no bigger than the size of New Jersey — is regarded by Iran as a “one-bomb country,” as one atomic weapon dropped on the Jewish state would wipe it from the map and cause another genocide of the Jewish people.

Iran represents a genuine threat not only to Israel, but to the entire world. It’s time for Dyer to face this stark reality. 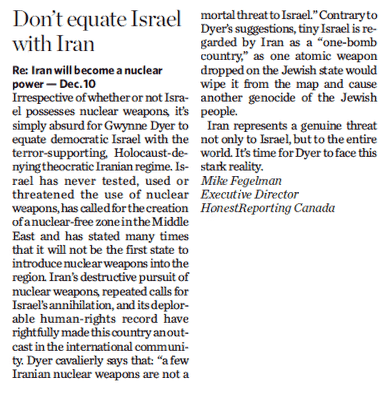