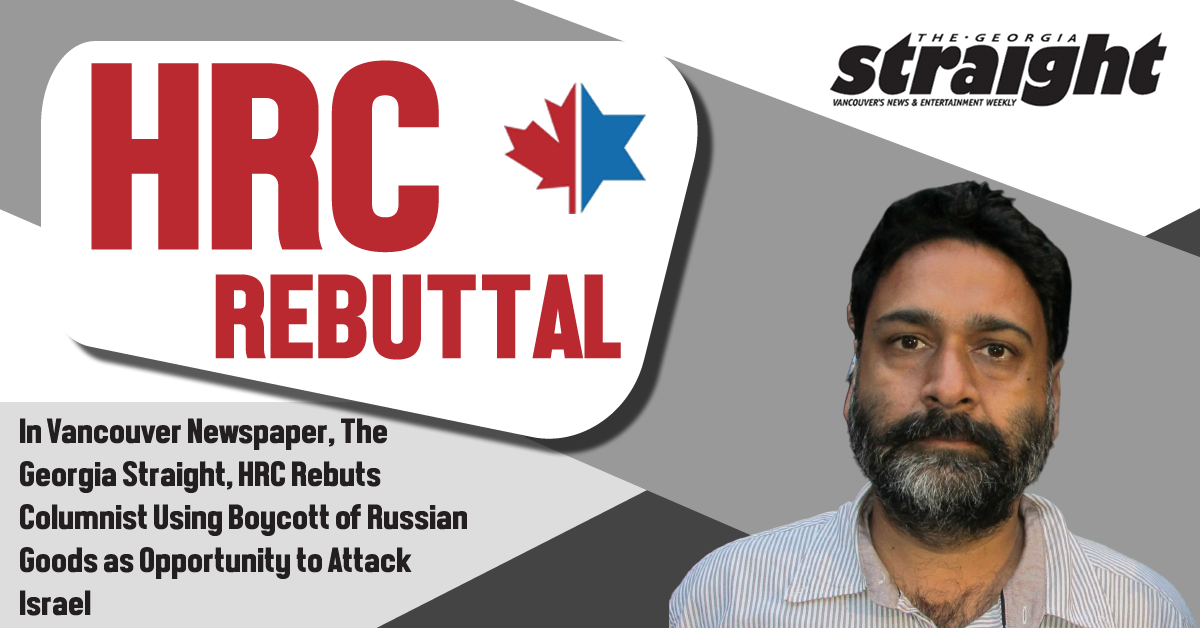 In a recent March 5 opinion column in the Georgia Straight newspaper, columnist Gurpreet Singh took the British Columbia government’s pulling of Russian alcohol from provincial shelves as an opportunity to parrot BDS talking points against Israel.

Lamenting that Israeli wines and liquors are still sold in British Columbia stores, Singh provided a litany of baseless claims to buttress his argument that Israel is deserving of widespread condemnation and sanctioning.

Read HRC’s rebuttal that was published on March 23 on The Georgia Straight website, or as appended below:

In the mid-1960s, psychologist Abraham Maslow famously wrote “I suppose it is tempting if the only tool you have is a hammer, to treat everything as if it were a nail.” His adage, now more than a half-century old, could just as easily have been written today about anti-Israel activists, who seem to look for an opportunity to drag Israel into any subject.

In an opinion column in the Georgia Straight on March 5 entitled “B.C. government’s decision to ban Russian liquor exposes its doublespeak on human rights”, Gurpreet Singh discussed the recent decision by the British Columbia government to ban Russian alcohol from the province’s liquor stores in protest of the recent Russian invasion of Ukraine.

But Singh’s column was not largely about Russia or Ukraine, but it also focused on Israel, and why Russian alcohol could be banned, but not alcohol from the Jewish state.

“…such massive outrage remains missing whenever Palestinians come under attack from Israel. Even as the Israeli occupation of Palestine continues for years, Canadian politicians have largely looked away. B.C. politicians are therefore no exception,” Singh wrote.

When Singh later observed that “the Israeli occupation of Palestine continues for years”, he apparently takes this statement as an indisputable fact that requires no supporting evidence.

There is a reason Singh provides only rhetoric, not facts when accusing Israel of occupying Palestinian land: because it is empty rhetoric utterly devoid of supporting evidence.

The Jewish people’s history in the land of Israel stretches back three thousand years, and this tiny strip of land—smaller than Vancouver Island—has been the indigenous homeland for Jews ever since then. It is the land where the Jewish prophets walked, where Hebrew has been read, studied, and spoken for millennia, where two Jewish temples stood, and where observant Jews face when they pray, no matter where in the world they are today.

Israel’s legal basis for land ownership is well established in international law. The San Remo Declaration in 1920, which was the foundation for Israel’s legal land claims, came nearly half a century before Palestine Liberation Organization (PLO) leader Yasser Arafat claimed that the Palestinians were a defined people who owned the land.

Clearly, the State of Israel is not occupying Palestinian land. If Singh is perhaps referring to Judea and Samaria—commonly referred to as the “West Bank” in media coverage—then he is still wrong. Judea and Samaria were occupied by the sovereign Kingdom of Jordan and were lost to Israel in 1967 when, under the leadership of King Hussein, Jordan attacked Israel. Today, Jordan does not claim the land as its own anymore, and international law simply does not allow the Palestinians—who do not represent a sovereign state that has ever been in existence—to claim the land as their own.

Perhaps even more remarkable than his claims about Israel’s alleged land theft is Singh’s statement that “BDS has received mostly hostile press.” It is unclear on what basis Singh argues that BDS—or the Boycott Divestment Sanctions movement against Israel—has been all but rejected or ignored by the news media. In fact, BDS is regularly covered by the news media thanks to anti-Israel detractors who propel its cause, including a recent CTV News Montreal story about a Russian pianist whose performance was canceled by the Montreal Symphony Orchestra in protest of the war in Ukraine.

Whether at the United Nations General Assembly, where Israel is condemned more than all other countries combined, year after year, or at college and university campuses, where anti-Israel BDS votes and initiatives are regularly introduced, Israel, Israelis, and indeed quite often Jews, are favourite targets of boycotts, divestments, sanctions, and opprobrium. In fact, each spring, campuses around the world are home to events and programs related to “Israeli Apartheid Week”, a cacophony of anti-Israel misinformation and bigotry under the guise of anti-oppression politics.

Singh appears to live in a world where Israel is a brutal occupier and attacker of the Palestinians, and where the BDS movement is ignored or rejected. But in the real world, Israel is a tiny country under constant threat from a constellation of groups, including Hamas, Hezbollah, Islamic Jihad, and Iran, as a small sample, and which despite 3,000 years of habitation in its historic homeland, continues to have its very right to exist questioned and challenged on an ongoing basis.

Singh’s concern for the well-being of the Palestinian people is admirable, but his commitment to factual accuracy leaves much to be desired.

Thanks to HRC and Mike Fegelman for a historical, factual clarification

It must be so tiring having to correct the morons that claim to be journalists but most are “opionists”. I can only hope that the majority of Canadians can read through their BS. If anyone knows history and facts, they would use these columns in the bottom of their birdcages.