In Toronto Star, HRC Says “Jews In Ukraine Have A Long History Of Suffering And Are Under Attack Again” 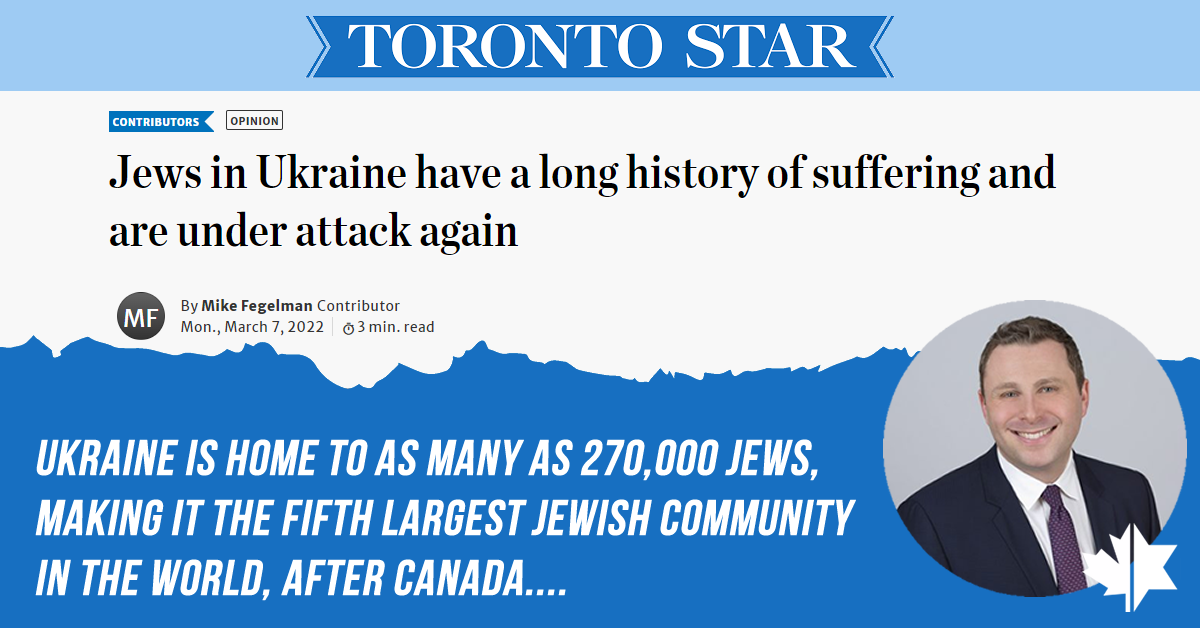 Today, the Toronto Star published our commentary about how Jews are caught in the middle of the Russia-Ukraine war, an important issue which has been overlooked thus far by the media.

The region’s substantial and ancient Jewish community are stuck in the middle of both warring parties, posing a grievous threat to Jews in Ukraine and in Russia.

Read the op-ed on the Star’s website by clicking here or see it immediately below.

Two days into the current hostilities between Russia and Ukraine, a video filmed inside a Kyiv synagogue went viral on social media.

The short clip, filmed by the gabbai, or sexton, of Kiev’s main synagogue, featured him making an emotional plea for people to pray for his community’s safety as they were evacuating the Ukrainian capital, joining countless others who were fleeing the violence.

The video, though an isolated example, represents one angle of the Russia-Ukraine war, often overlooked thus far by the media: the region’s substantial and ancient Jewish community who are stuck in the middle of both warring parties.

Ukraine is home to as many as 270,000 Jews, making it the fifth largest Jewish community in the world, after Canada. Though largely concentrated in the capital of Kyiv, other population centres include the cities of Dnipro, Odessa and Kharkiv. Jews represent the largest non-Christian faith in the country.

The Jewish community in Ukraine stretches back over 1,000 years, and in that time it has endured significant suffering.

Tens of thousands of Jews were killed during the Khmelnytsky Uprising and associated pogroms in the 17th century, when antisemitic violence was widespread. Starting in the 19th century and until 1905, pogroms in Odessa, Kyiv and elsewhere saw more violence, as local mobs stabbed, shot and decapitated Jews in bloody antisemitic violence.

Tragically, the Holocaust was the low point for Ukraine’s Jewish population, when as many as 1.6 million were killed, both at the hands of the Nazi war machine and by local collaborators.

The best-known massacre during the Holocaust took place in September, 1941, when over the course of two days, Nazis and their local collaborators murdered more than 33,000 Jews in the town of Babi Yar in Kyiv. Russia is reported to have recently bombed the Holocaust memorial at Babi Yar, which commemorates the murder of Jews by the Nazis in the Second World War, making it another casualty of this war.

Russian President Vladimir Putin has absurdly cited “de-Nazification” as one of his goals in Ukraine. Today, while Ukraine’s Jewish population is only a fraction of its pre-Holocaust size, it has not disappeared entirely, and in fact, the current president of Ukraine, Volodymyr Zelenskyy, is both Jewish and a descendant of Holocaust survivors.

Across the border in Russia, there are as many as 800,000 Jews, who have a long history serving the country’s armed forces. Since Israel’s independence in 1948, nearly 1.8 million Jews have immigrated to the Jewish state from both Russia and Ukraine, making the country one of the largest Russian-speaking countries in the world.

Israel also faces a Russian military presence in Syria, which has successfully propped up the Assad regime in the face of onslaughts by the Islamic State in recent years. Despite this presence, Russia has effectively permitted Israel’s continued operations in Syria (which have largely targeted Iranian encroachment in the country), by not shooting down Israeli jets when they attack Iranian and Syrian military targets.

This unique Israeli position was recognized two days into the current hostilities when Ukraine’s president publicly called on Israel to host negotiations in Jerusalem between Ukraine and Russia.

With the eruption of hostilities in recent days, a growing number of Ukrainian Jews have inquired about moving to Israel.

After 1,000 years of presence, and having endured horrific persecution, the future for Ukrainian Jews may be in doubt once and for all, but unlike in the past they have a safe haven and refuge should they need it: the Jewish State of Israel. 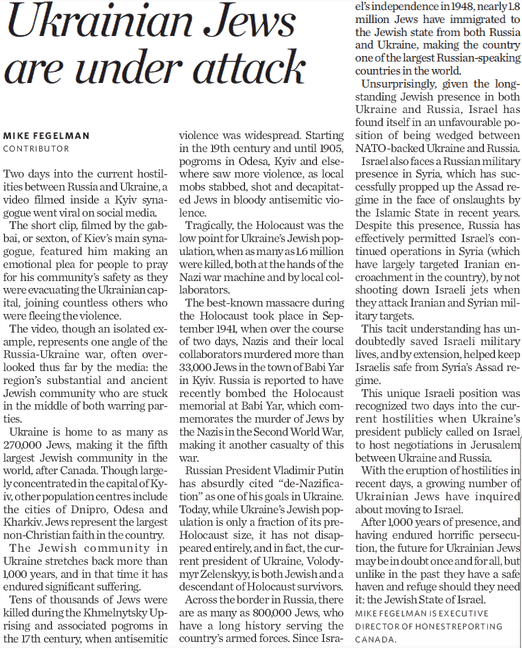