In the National Post and Western Standard, HRC Calls Out Anti-Israel Conspiracy Theories 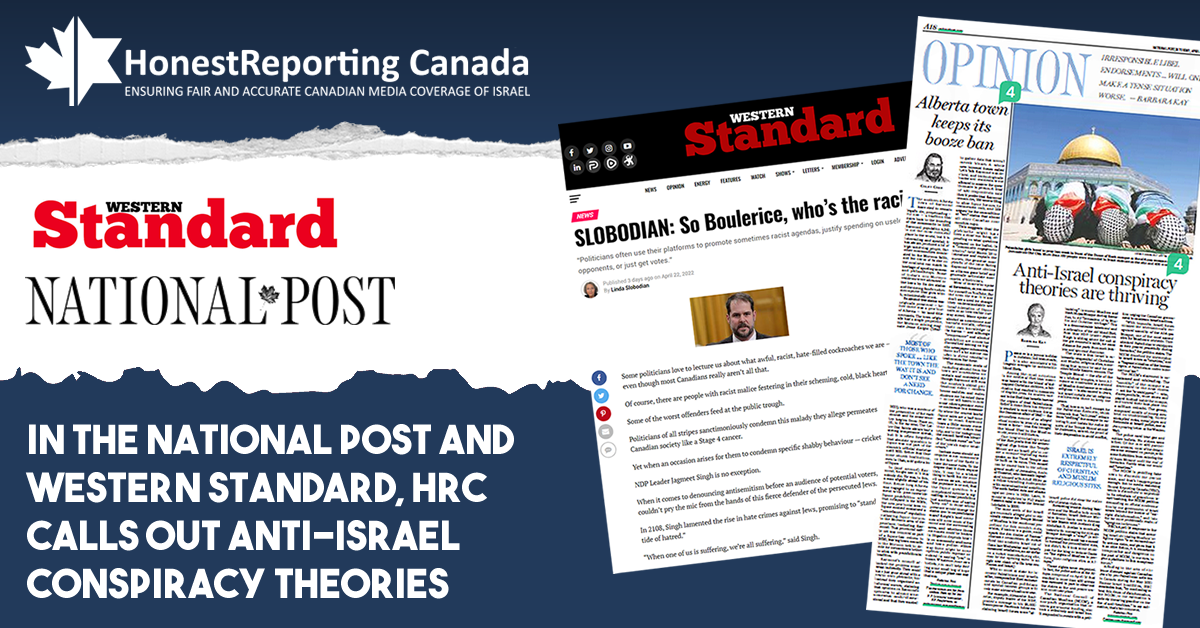 The NCCM is peddling false news to discredit the Jewish state, and that’s inappropriate enough. But to media watchdog, Honest Reporting Canada (HRC), which is disinclined to hyperbole in its rebuttals of gratuitous Israel-bashing, the NCCM petition demanding an official condemnation by our government of Israel strays beyond the border of “outright disinformation,” and into the far more problematic realm of “egregious incitement.”

HRC’s April 18 response to the NCCM petition states that accusing Israel of violating Muslims’ religious rights “is an extraordinarily serious claim, and given that it is an utter fiction, it is remarkably irresponsible and dangerous on the part of NCCM, in our eyes, to give a platform to this conspiracy theory.”

Alluding to the acts of violence directed against Canadian Jews by pro-Palestinian activists in Canada during the May 2021 Hamas-Israel hostilities, HRC concludes that, “by continuing to beat this drum of disinformation, the NCCM, in our estimation is actively throwing gasoline on the fire of antisemitism.” In my estimation, that’s a fair comment.

As well, on April 22, the Western Standard’s Linda Slobodian interviewed our Executive Director, Mike Fegelman, about how NDP Deputy Leader Alexandre Boulerice’s recent Facebook post propagated “the centuries-old lie that Al-Aqsa, the site for Muslims, is under attack is a modern blood libel that has the potential to fan the flames of antisemitism against Canada’s 400,000 Jews.”

Singh has ignored calls by HonestReporting Canada (HRC) to issue an apology and formal retraction of Boulerice’s ugly fibs.

Posts like this go viral. They feed hate and division.

They’re an insult to Israelis, Canada’s Jews, Palestinians being used as pawns — all Canadians.

“Propagating the centuries-old lie that Al-Aqsa, the site for Muslims, is under attack is a modern blood libel that has the potential to fan the flames of antisemitism against Canada’s 400,000 Jews,” said HRC Executive Director Mike Fegelman.

There are videos of young people marching around the Temple Mount with Palestinian flags, waving Hamas banners — a group Canada has designated as terrorists.

There are videos of them hurling rocks at Israeli police and dropping them on Jews praying at the Western Wall.

The thugs barricaded themselves inside Al-Aqsa with a huge supply of large rocks and firecrackers.

“This is a revered holy site. You wouldn’t go into a church, or mosque in Canada, or a synagogue, with incendiary firecrackers, breaking cinder blocks to fashion them into rocks to deploy then as objects to main and murder,” said Fegelman.

“These people are obviously not pious. There are videos of them wearing shoes in the mosque, which is desecration, playing soccer in the mosque. But more importantly, using it as a staging ground for violence.”

Violence erupted and police contained it.

“Israel has no choice. As a government it has the responsibility to ensure the safety of not just the Jews on the Temple Mount in the Western Wall area, but Muslims who want to pray.”

“Even though there was this really, horrible violence, Israel was still able to facilitate about 60,000 Muslim worshippers that day for prayers for Ramadan. Apartheid regimes don’t do this.”

Boulerice exhibited “disturbing behaviour” as a high-ranking member of a party that aspires to lead Canada, a party that has “formed a pseudo-coalition with the Liberal government,” said Fegelman.

“Elected officials, especially if they use social media, have to do their due diligence, be more circumspect, and really careful about anything they offer about controversial issues.”

The media lets them go unchecked, often repeating the falsehoods.

Since January 2022, the HRC has called on CBC alone to correct or retract two-dozen false reports on Israel.

“There doesn’t seem to be a real appetite in CBC for accountability. I want them to be objective in their reporting. But they’re very partisan, very prejudice. It’s widespread, not one particular program, both radio and television.”