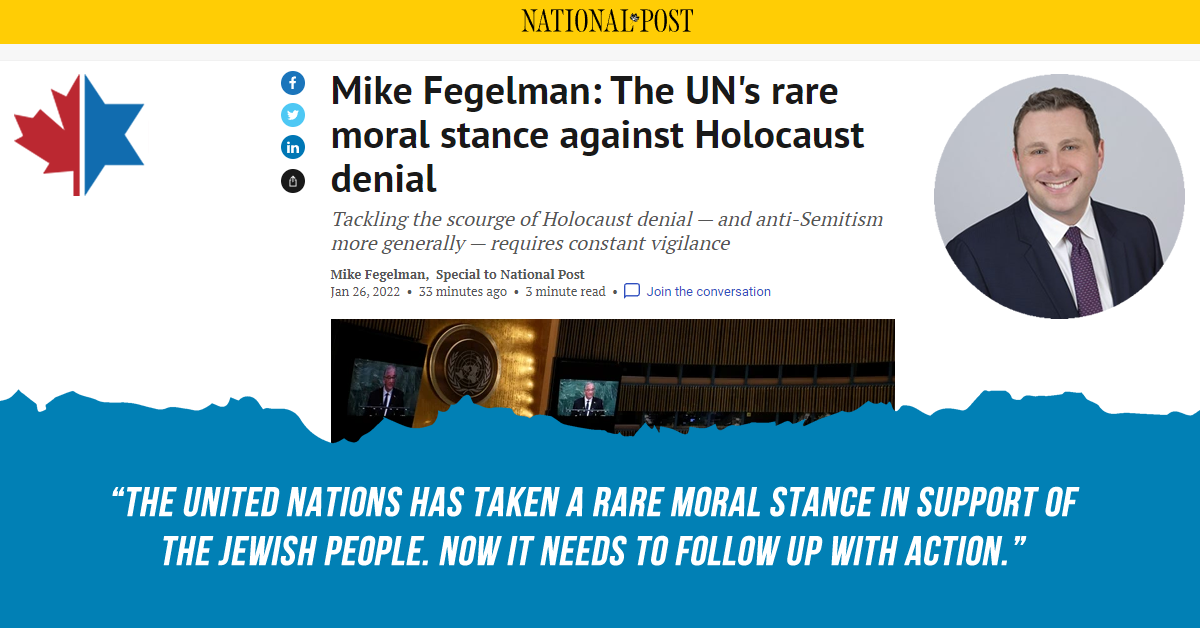 As we mark International Holocaust Remembrance Day today, on the front page of the National Post, we commented on how it was praiseworthy that the United Nations took a stand against Holocaust denial, but we ask if it will be followed by action or mere silence?

It was on January 20, that a rare event took place at the United Nations General Assembly: a near-unanimous agreement on the part of every single country to condemn Holocaust denial, and to agree on a definition of it. Furthermore, the world body called upon social media companies to take a leading role fighting the scourge of Holocaust denial. Unsurprisingly, Iran was the only country to oppose the measure, but in its opposition, the Islamic Republic once again showed its true face to the world, as a regime driven by small-minded hatred towards Jews.

Read our commentary by HRC Executive Director Mike Fegelman on the Post’s website or immediately below.

For many years, the United Nations General Assembly has been one of the least hospitable places in the world for Israel and the Jewish people. Last year, the international body passed 14 resolutions targeting Israel, and only four that specifically condemned the actions of other countries, such as North Korea, Iran, Myanmar and Russia. But last week, there was a rare ray of hope.

On Jan. 20, the General Assembly agreed on a definition of Holocaust denial that cites “intentional efforts to excuse or minimize the Holocaust,” as well as “attempts to blame the Jews for causing their own genocide,” among other related

examples. Although the definition is not legally binding, it was a strong statement of rare moral clarity from the UN.

The motion was introduced by Germany and Israel, two countries that understand the dangers of unchecked hate. Only one country explicitly disassociated itself with the resolution and voted against it: the Islamic Republic of Iran, the world’s largest state sponsor of terror.

The Iranian regime — which actively funds, arms and trains groups that target both Israelis and Jews — was nothing if not consistent in its refusal to recognize the dangers of Holocaust denial. After all, it was Mahmoud Ahmadinejad, the former president of Iran, who famously hosted a Holocaust-denial conference in Tehran in 2006 that featured such prominent Holocaust deniers and historical revisionists as David Duke and Robert Faurisson.

Most strikingly, the motion at the UN not only condemned Holocaust denial, it also called upon social media companies to take an active role in reining in the widespread and pernicious presence of anti-Semitism on their platforms. This call to action is especially important as we mark International Holocaust Remembrance Day on Jan. 27.

The proceedings at the UN took place 80 years to the day after the Wannsee Conference, where Hitler and his senior officials mapped out the Final Solution for the Jews in the city of Wannsee, Germany. The lesson, even nearly a century later, remains the same: unchecked anti-Semitism is more than a nuisance; it is a menace with potentially genocidal repercussions.

But the Holocaust did not take place in a vacuum: it happened following a years-long anti-Semitic propaganda campaign on the part of Nazi Germany. Only after Jews were completely dehumanized could they be easily murdered by assailants who no longer thought of them as equals.

The same danger exists today, and as long as social media platforms like Facebook, Google, TikTok, Instagram and others do not forcefully combat anti-Semitism in their midst, they are tacitly allowing Jew hatred to fester and potentially find a fertile home.

Holocaust denial is not merely historical revisionism; it is a clear attempt on the part of its purveyors to deny the Jewish people closure on their genocide, and to spread the falsehood that Jews concocted a massive conspiracy in order to extract concessions from the rest of the world. Holocaust denial is not, therefore, a victimless crime; it is an active act of anti-Semitism.

Gilad Erdan, Israel’s ambassador to the United Nations and the grandson of Holocaust survivors, reminded the world body of the dangers of not acting proactively against anti-Semitism. “As the number of (Holocaust) survivors dwindles, the younger generations are being indoctrinated on social media to doubt reality and trust deception,” he said, adding that social media giants were “shirking responsibility.”

Canada should be lauded for being one of the 114 countries that co-sponsored the resolution, but it should be seen as the start, not the end, in the fight against anti-Semitism. As noted by Statistics Canada last year, Jews represent the single-largest victims of religiously motivated hate crimes in this country, and anti-Semitism on social media knows no boundaries or borders.

Tackling the scourge of Holocaust denial — and anti-Semitism more generally — requires constant vigilance, backed up by powerful legal consequences for those who spread dangerous hatreds toward Jews. The United Nations has taken a rare moral stance in support of the Jewish people. Now it needs to follow up with action.