In CBC Interview, Former PLO Spokesperson Diana Buttu Claims That “Every Single Day, Israel Is Going To… Kill A Palestinian.” 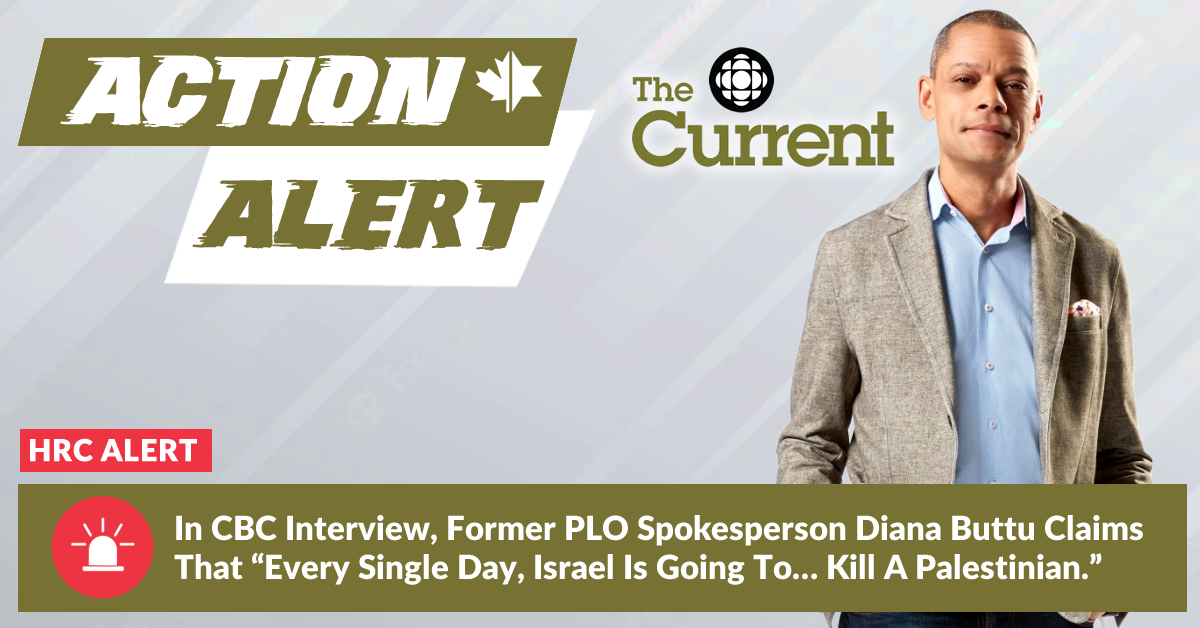 In recent weeks, Israel’s new government has proposed sweeping new judicial reforms. Since then, large-scale protests have erupted, with critics voicing opposition to the Netanyahu government’s plans, as is their right in a liberal democratic state such as Israel.

On the January 19 edition of The Current, a CBC Radio program hosted by Matt Galloway, three guests were featured to discuss their views on the Netanyahu government’s proposed changes, including Dahlia Scheindlin, a fellow at a Tel Aviv-based think tank, and Eli Lipshitz, spokesperson and first secretary for public diplomacy for the Embassy of Israel in Canada, based in Ottawa.

But it was the third guest, Diana Buttu, a lawyer and former spokesperson for the Palestine Liberation Organization (PLO), whose statements to Galloway were filled with vitriol and disinformation.

Buttu began her conversation with Galloway with an anti-Israel diatribe, accusing the Jewish State of wanton murder and occupation.

While Buttu’s denunciation was heavy on invective and hyperbole, it was sorely lacking in facts. While it is sadly true that the start to 2023 has seen violence between Israelis and Palestinians, there is simply no evidence whatsoever for her suggestion that Israel sets out to “kill a Palestinian,” who she depicts as innocent civilians.

As for Buttu’s assertion that most of the Palestinians killed in recent violence “have been children,” some who were “targeted,” this is extremely misleading, and serves to grossly oversimplify all Palestinians as innocent victims of a bloodthirsty Israeli war machine.

For example, in early January, a 16-year-old Palestinian was killed in clashes with Israeli troops, but beyond the headlines, Israeli forces reported that they fired in response to the lobbing of explosive devices, including Molotov cocktails. Another Palestinian, a 19-year-old, attempted to murder an innocent Israeli farmer, lunging at him with a knife and managing to stab the victim in the head before being killed in self-defence by a witness. Meanwhile, on January 22, Israeli police arrested a 13-year-old Palestinian teen carrying a knife, thwarting a terror attack and saving countless lives.

These details, such as how Palestinians incite and indoctrinate youths to murder innocent Israelis and co-opt them into being child soldiers, were ignored by. While such details run completely contrary to Buttu’s desired portrait of Israel, it is thus unsurprising that she failed to give any context to her baseless charge.

Listen to the full CBC The Current Clip Below

But that was only the beginning of Buttu’s anti-Israel soliloquy.

She also made the statement that “this is a one-way occupation. Israel is doing the occupying.” While this declaration is a constant refrain of anti-Israel activists, it is still false. Israel possesses strong legal claims to Judea & Samaria (referred to by the news media as the “West Bank”), which has never been part of any Palestinian state. Thus, despite repeated attempts to frame Israel’s presence in the land where Jews have lived for three thousand years as an “occupation,” the reality is markedly different.

Perhaps the strangest comment from Buttu came in response to a question from host Matt Galloway about what responsibilities the Palestinian leadership has to try and lower tensions between Israelis and Palestinians. When asked what Palestinian Authority (PA) leader Mahmoud Abbas can do, she stated that “Mahmoud Abbas is the equivalent of a mayor and that’s it. He doesn’t have the ability to do anything.”

Such a remark serves to entirely dismiss Abbas and the Palestinian leadership of all responsibility in helping to fan the flames of violence and deescalate the conflict. While Buttu depicts Abbas as a hapless victim, the Palestinian leadership actively incites violence and hatred against Israel and Jews in general in school textbooks, official media, mosques and elsewhere, and also engages in ‘pay for slay,’ where the Palestinian Authority pays family members of Palestinian terrorists. While it was commendable that Host Galloway reiterated this point to Buttu, which was originally raised by Israeli Spokesperson Lipshitz, but Buttu ceremoniously dismissed this by saying “That’s not true. This is all their way of demonizing.”

In her appearance on The Current, Buttu provided no nuance, preferring instead to portray Israel in the worst light imaginable, and not be hindered by inconvenient facts. While it’s commendable that The Current featured a spokesperson from the Israeli Embassy in Ottawa and asked tough pressing questions, it’s regrettable that CBC Host Matt Galloway did not strongly challenge Diana Buttu, who as a result, was given an opportunity to malign Israel and frame the Jewish State as a bloodthirsty war machine bent on killing Palestinian children.

Please send your considered comments to The Current through its Contact Us web page.