In the May edition of the London based Canadian-Arabic newspaper, Al bilad (see page 57 or below), NDP MP Irene Mathyssen penned an op-ed about the Al Aqsa Mosque, Islam’s third holiest site, which failed to mention that the mosque is built atop Judaism’s holiest site, the Temple Mount. 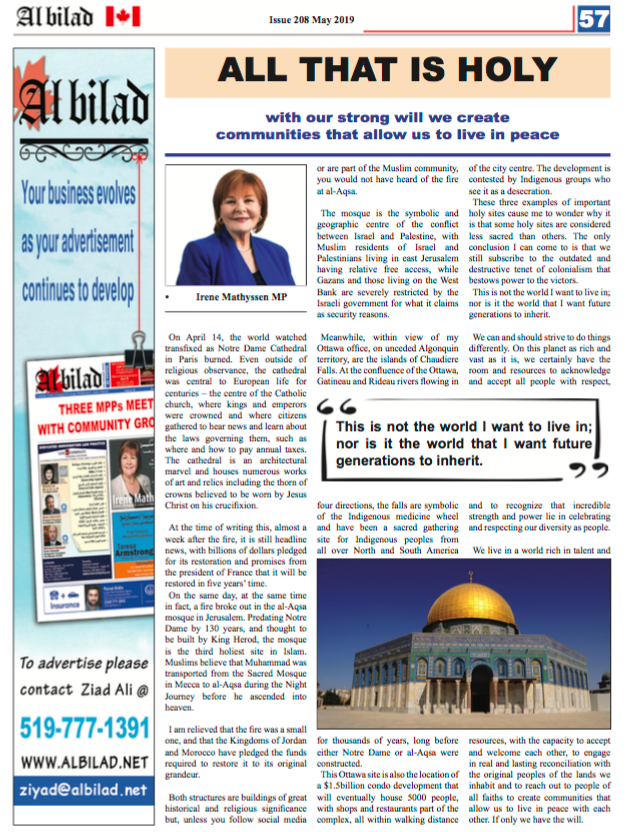 Mathyssen is a supporter of various Palestinian activist efforts including a “Canadian March to Open the Borders of Gaza” and a recent participant of a trip to “Palestine” facilitated by the Canada-Palestine Parliamentary Friendship Group. Mathyssen, an NDP MP for London-Fanshawe, announced in 2018 that she won’t seek re-election in the next federal race.

In her op-ed, Mathyssen wrongly claimed that King Herod built the Al Aqsa Mosque, whereas under his reign the Temple was re-built and the Temple Mount was greatly expanded.

Mathyssen is guilty of sins of omission and for her inherent failure to respect Jewish holy sites, and for challenging the legitimacy of revered holy sites in the Jewish faith.