HRC’s Post Millennial Debut: In Fight Against Coronavirus, Israel is the Model for the World

Israel truly has been a model for other countries to emulate in its fight against COVID19, and the entire world may soon benefit from Israel’s ingenuity, its perseverance and its chutzpah!

Read HonestReporting Canada’s debut commentary at the Post Millennial or as appended below: 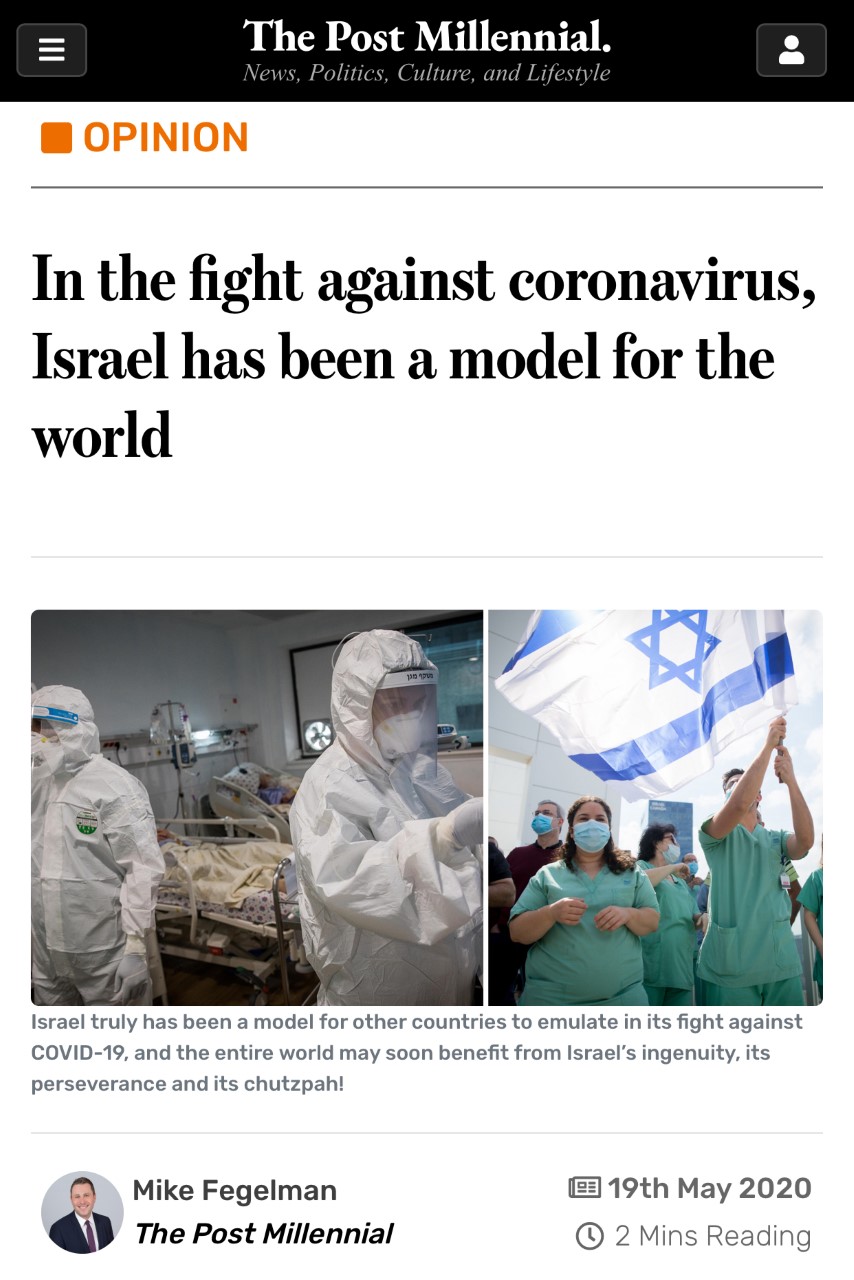 Earlier this year, the coronavirus hit the world by storm, sickening millions and killing hundreds of thousands of people.

As the virus spread, countries raced to find ways to combat and manage the outbreak. Tragically, this is no easy task, but a small number of countries have proven to be remarkable successes, none more so than Israel, regarded as the safest country in the world in the fight against COVID-19. The Deep Knowledge Group recently released its worldwide safety rankings which found that Israel’s quarantine efficiency, ability to monitor and detect the virus, its emergency treatment readiness and government management efficiency, put the Jewish state on the vanguard.

Initially, Israel was hit hard with over six thousand cases by early April⁠—a significant amount for a country with only 9 million people. Israel is no stranger to seemingly insurmountable challenges, and by mid-April, when COVID-19 was ravaging Europe and North America, Israel was already past its peak, and to date, has only suffered slightly over 250 deaths.

There are three important lessons that Canada and nations worldwide can learn from Israel.

First, Israelis are remarkably resilient. In only 72 years since independence⁠—which took place only three years after the Holocaust⁠—Israel has fought dozens of wars, border skirmishes and conducted anti-terrorism campaigns to defend its people, often at great personal sacrifice. During Israel’s War of Independence, it lost 6,000 souls – about 1% of Israel’s population at the time. Israelis remember the words of late Prime Minister Golda Meir, “We Jews have a secret weapon in our struggle with the Arabs – We have no place to go.” Israelis understand that even the darkest times don’t last forever. Hope, resolve, and always living on an existential footing are Israel’s ace in the hole, along with knowing that any lost war may be its last.

Second, Israelis appreciate that nothing is more precious than human life, and they are willing to fight to protect themselves, their family, and their neighbours from harm, whether in war, from terrorism, or from a deadly virus. Israelis of all ages know what it’s like to send a loved one into battle and not know if they will return, and that everything possible should be done to save a life. Israelis live by the biblical dictum that “Whoever saves a life, it’s as if he saved an entire world.”

Third, Israel, the “Start-Up Nation,” is tremendously innovative, able to adapt and willing to go against the grain and buck conventional wisdom. Israel was one of the first country’s to completely seal itself off from the world to prevent the spread of infection. With alacrity, Israel initiated travel bans, developed virus-tracking software, forced quarantines, implemented drive-through testing sites, and even retrofitted simple breathing devices into ventilators. Israel even used its secretive Mossad spy agency to acquire medical gear and to procure manufacturing technology, needed in the pandemic.

A tiny country that has more companies listed on the NASDAQ stock exchange than all other countries except the US and China, Israelis are never satisfied with the status quo, and are always looking to make the world a better place. It’s perhaps no surprise, that on May 5, Israeli researchers announced a significant breakthrough in the hunt for a vaccine to COVID-19.

Israel truly has been a model for other countries to emulate in its fight against COVID-19, and the entire world may soon benefit from Israel’s ingenuity, its perseverance and its chutzpah!