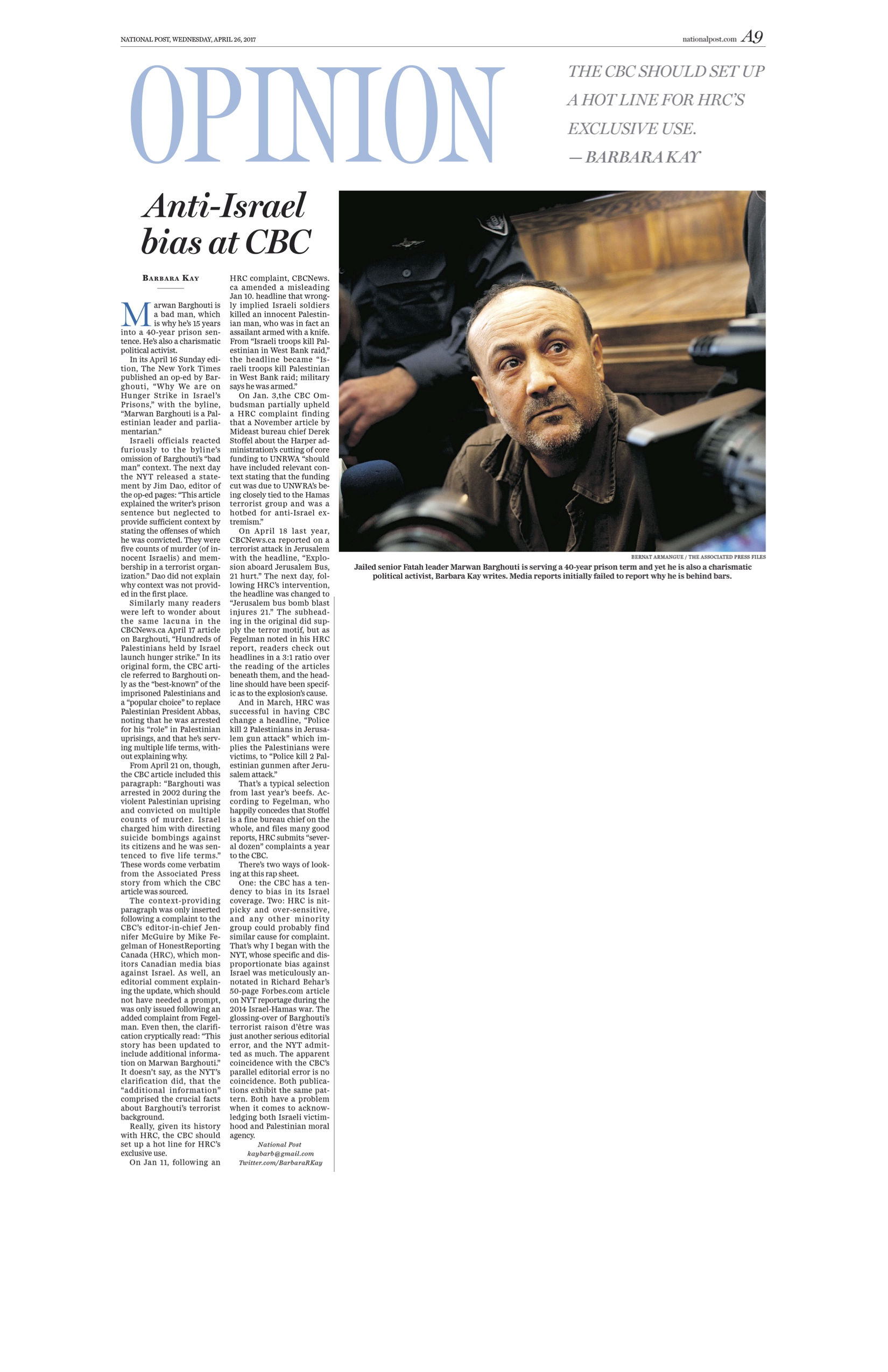 In the National Post on April 26, Columnist Barbara Kay writes that when pointing to the CBC’s anti-Israel bias, there are plenty of examples. Kay cites HonestReporting Canada (HRC) as being on the front lines in countering the CBC’s bias against Israel, a recent example of which was when HRC successfully prompted the CBC to issue a story update after the CBC News website sanitized Palestinian terrorist Marwan Barghouti.

Read the commentary in full as appended below or online here.

National Post: Barbara Kay: “When pointing to CBC’s anti-Israel bias, there are plenty of examples” (April 26, 2017)

Marwan Barghouti is a bad man, which is why he’s 15 years into a 40-year prison sentence. He’s also a charismatic political activist.

In its April 16 Sunday edition, The New York Times published an op-ed by Barghouti, “Why We are on Hunger Strike in Israel’s Prisons,” with the byline, “Marwan Barghouti is a Palestinian leader and parliamentarian.”

Israeli officials reacted furiously to the byline’s omission of Barghouti’s “bad man” context. The next day the NYT released a statement by Jim Dao, editor of the op-ed pages: “This article explained the writer’s prison sentence but neglected to provide sufficient context by stating the offenses of which he was convicted. They were five counts of murder (of innocent Israelis) and membership in a terrorist organization.” Dao did not explain why context was not provided in the first place.

Similarly many readers were left to wonder about the same lacuna in the CBCNews.ca April 17 article on Barghouti, “Hundreds of Palestinians held by Israel launch hunger strike.” In its original form, the CBC article referred to Barghouti only as the “best-known” of the imprisoned Palestinians and a “popular choice” to replace Palestinian President Abbas, noting that he was arrested for his “role” in Palestinian uprisings, and that he’s serving multiple life terms, without explaining why.

From April 21 on, though, the CBC article included this paragraph: “Barghouti was arrested in 2002 during the violent Palestinian uprising and convicted on multiple counts of murder. Israel charged him with directing suicide bombings against its citizens and he was sentenced to five life terms.” These words come verbatim from the Associated Press story from which the CBC article was sourced.

The context-providing paragraph was only inserted following a complaint to the CBC’s editor-in-chief Jennifer McGuire by Mike Fegelman of HonestReporting Canada (HRC), which monitors Canadian media bias against Israel. As well, an editorial comment explaining the update, which should not have needed a prompt, was only issued following an added complaint from Fegelman. Even then, the clarification cryptically read: “This story has been updated to include additional information on Marwan Barghouti.” It doesn’t say, as the NYT’s clarification did, that the “additional information” comprised the crucial facts about Barghouti’s terrorist background.

Really, given its history with HRC, the CBC should set up a hot line for HRC’s exclusive use.

On Jan. 3, the CBC Ombudsman partially upheld a HRC complaint finding that a November article by Mideast bureau chief Derek Stoffel about the Harper administration’s cutting of core funding to UNRWA  “should have included relevant context stating that the funding cut was due to UNWRA’s being closely tied to the Hamas terrorist group and was a hotbed for anti-Israel extremism.”

On April 18 last year, CBCNews.ca reported on a terrorist attack in Jerusalem with the headline, “Explosion aboard Jerusalem Bus, 21 hurt.” The next day, following HRC’s intervention, the headline was changed to “Jerusalem bus bomb blast injures 21.” The subheading in the original did supply the terror motif, but as Fegelman noted in his HRC report, readers check out headlines in a 3:1 ratio over the reading of the articles beneath them, and the headline should have been specific as to the explosion’s cause.

That’s a typical selection from last year’s beefs. According to Fegelman, who happily concedes that Stoffel is a fine bureau chief on the whole, and files many good reports, HRC submits “several dozen” complaints a year to the CBC.

There are two ways of looking at this rap sheet.

One: the CBC has a tendency to bias in its Israel coverage. Two: HRC is nit-picky and over-sensitive, and any other minority group could probably find similar cause for complaint. That’s why I began with the NYT, whose specific and disproportionate bias against Israel was meticulously annotated in Richard Behar’s 50-page Forbes.com article on NYT reportage during the 2014 Israel-Hamas war.  The glossing-over of Barghouti’s terrorist raison d’être was just another serious editorial error, and the NYT admitted as much. The apparent coincidence with the CBC’s parallel editorial error is no coincidence. Both publications exhibit the same pattern. Both have a problem when it comes to acknowledging both Israeli victimhood and Palestinian moral agency.