On August 22 , CBC TV anchors and a freelance reporter falsely claimed that rockets recently launched from within Lebanon at Israel failed to land in the Jewish state and therefore caused no damage and injuries. In sharp contrast, Haaretz and the Jerusalem Post reported that:

“Two of the Katyushas crossed the border and landed in Israel, causing no casualties but some damage.

One missile hit Kibbutz Gesher Haziv, damaging a road and vehicles parked on it. Another projectile landed in a built-up community in the Western Galilee. There were no injuries in the attack, Magen David Adom paramedics said. Local residents reported that one rocket fell close to a home in which dozens of Holocaust survivors reside.

“I heard a weak explosion, and then in parallel to the siren, I heard a stronger boom,” Keinan Engel, a resident of Nahariya, told Army Radio. “I went to take cover in a reinforced room.”

Meanwhile, YnetNews reported that: “One of the two sites hit by Grad rockets is an inn for Holocaust survivors, in which damage was sustained to the kitchen, but no one was injured. Several guests who were at the inn’s dining room were rushed to fortified space when the sirens sounded.” Also, the Times of Israel reported that:

“Dozens of elderly Holocaust survivors, in a facility in the Acre area, came very close to being hit by one of the four Katyusha rockets fired into Israel from southern Lebanon on Thursday afternoon.

The survivors, who live in a facility comprising several buildings in the area, heard sirens wailing ahead of the rocket attack, but were unable to reach bomb shelters before the rocket struck.

The rocket, one of two that landed in residential areas, fell a short distance from their facility, causing damage to “four or five homes” and two cars in the immediate area, Channel 2 News reported on Thursday night.

CBC wrongly said, for example at 1:15pm, 2:10pm and at 5:30pm, that : “… three rockets failed to land in Israel while the fourth was intercepted by Israel’s Iron Dome Defense system. Fallout from that rocket caused some damage along Israel’s northern border.” To watch this report please click here or on the image below: 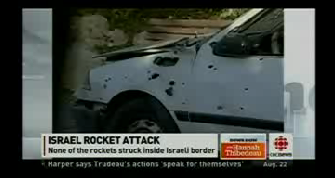 The CBC anchor said this despite showing damage purportedly of an Israeli vehicle, of a rocket on the ground in Israel, and of Israeli officials surveying a damaged roadside of an Israeli city. The CBC super’s caption per above wrongly said that “none of the rockets struck inside Israeli border.”

At 11:30am in a tape talk with freelancer Irris Makler which you can watch by clicking here or on the image below, CBC did correctly report in attribution that “Israeli police say that rockets fired from Lebanon have landed in northern Israel,” but Ms. Makler wrongly claimed there was “no damage” from the attack and that two rockets only entered “Israeli airspace”. Meanwhile, a CBC super’s caption did acknowledge two rockets as having landed in a northern Israel city, though the headline to the super said the rockets were “fired over Israel”. All the while, CBC again showed actual footage of the damage ostensibly in Israel! 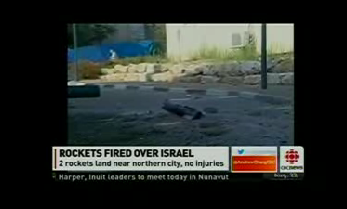 Additionally, at 9:30am EST on August 23, CBC News erroneously stated the following in regards to an Israeli air force strike on terror targets in Lebanon: “The strike is seen as retaliation after Lebanon fired four rockets into Israel a day earlier, there were no casualties in either case.” To watch this report please click here.

While Israel holds Lebanon ultimately responsible for any attacks emanating from its territory, technically, the most accurate information available at the time as reported by CBC.ca itself showed that an Al-Qaeda inspired group, the Abdullah Azzam Brigades, claimed responsibility for the rocket attacks. There is no evidence to date to show that the country of Lebanon committed an act of war by firing onto sovereign Israeli territory.

We were cognisant that these news segments featured reportage that was developing on the fly, but that should not absolve the CBC from getting the facts straight. To rectify this situation, we asked the CBC to to correct these mistakes and are pleased to report that on August 23 the following on-air clarification was issued (see text below): 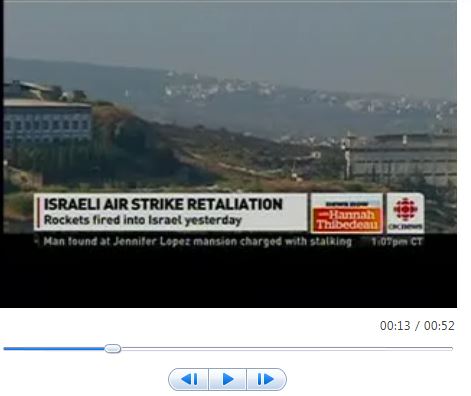 Clarification: “And in southern Lebanon, Israel’s air force bombed a militant base. The Israeli Defence Minister said it was in response to a cross-border attack yesterday. Several rockets were fired from Lebanese territory and hit northern Israel. An Al Qaeda associated groups claimed responsibility for that attack on Israel. Now we’d like to clarify some information about that attack that we reported yesterday afternoon. At first, there were mixed reports coming out of Israel about whether the four rockets actually landed in Israel. Initially, the Israel Defense Forces said that it had intercepted one of the rockets and that the other three fell outside Israeli territory. The IDF later confirmed that three rockets did in fact land in Israel causing some damage. The fourth rocket was intercepted by Israel’s Iron Dome defence system.”

HonestReporting Canada commends CBC News for the issuance of this on-air clarification which properly rectified its errors.