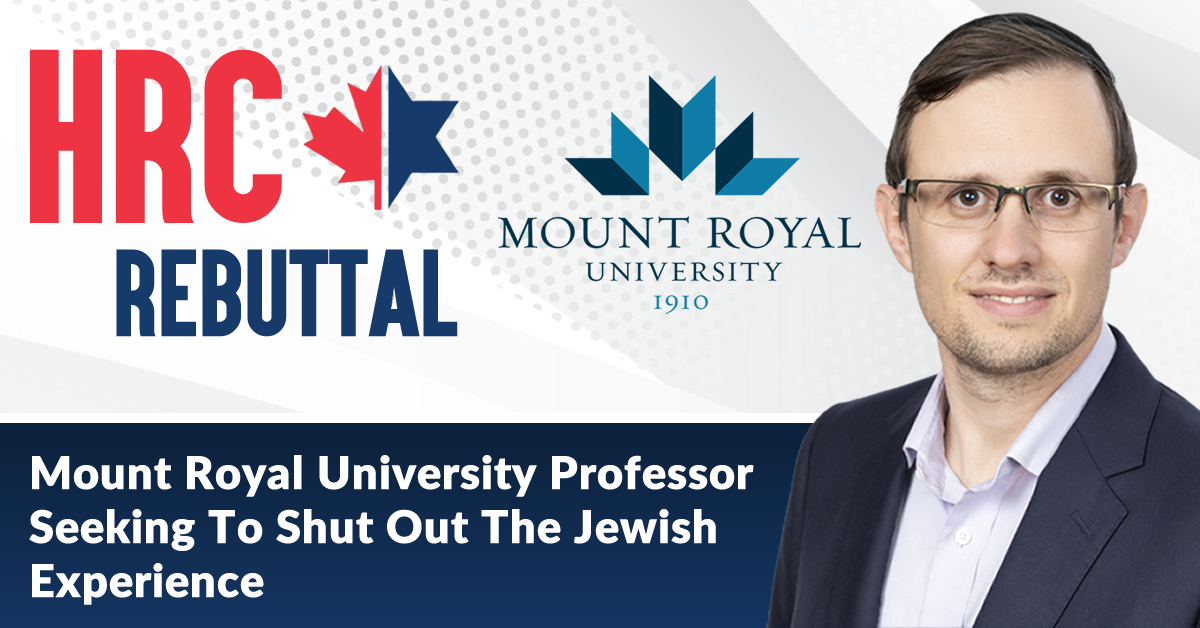 In the last two years, Mark Muhannad Ayyash, an Associate Professor of Sociology at Mount Royal University in Calgary, has written 10 anti-Israel articles in English for Al Jazeera, the Qatar-based news service.

His latest November 30 opinion article entitled: “For Canadian universities, the Palestinian is the ‘toxic other,’” was a rambling mishmash of anti-Israel disinformation, claiming that Canadian post-secondary institutions are actively attempting to “expel the Palestinian critique from their halls of academe.”

Ayyash cited a report by the anti-Israel pressure group Independent Jewish Voices (IJV), and stated that there is a campaign of “repression, silencing, harassment, intimidation, and marginalisation” against students who promote the Palestinian cause on Canadian university campuses.

While it is certainly true that institutions of higher learning must be open marketplaces of ideas, and as such, must tolerate the existence of a variety of opinions, Ayyash hardly practices what he preaches.

In fact, Ayyash’s column hardly reflects any tolerance towards Israel or anyone promoting views supportive of the Jewish State.

For example, Ayyash depicts the “Zionist project” as “a racist settler colonial project that violently expels Indigenous Palestinians from their lands, erasing their history, presence, aspirations, and identity.”

While Ayyash attempts to portray Zionism as some kind of colonial enterprise aimed at displacing the “indigenous Palestinians” from their land, the reality could not be more different.

For three thousand years, and despite a long list of foreign conquering armies attempting to destroy the Jewish connection to Israel, the Jewish People have lived in the land of Israel. Zionism is the Jewish People’s drive and quest for self-determination in their ancestral homeland. While the name may be fairly modern in nature – originating in the late 19th century – the concept is ancient.

Jews have lived and died in their homeland for three millennia, and today Israeli Jews walk in the footsteps of their Jewish ancestors, including prophets and kings, speaking the same language, following the same faith, and living in the same land.

Zionism, thus, is hardly a settler-colonialist project; it is the disruption of such a project. When the Jewish People achieved independence from the United Kingdom in 1948, it represented a victory of indigenous peoples over colonialism.

Ayyash is attempting to have his cake and eat it, too. On one hand, he rails against Canadian universities for what he describes as the erasure and exclusion of Palestinian narratives, but he simultaneously delegitimizes and utterly disregards the entirety of the Jewish experience in the land of Israel.

In fact, the lie that Zionism is a settler-colonialist enterprise, and not the movement for self-determination is so pervasive that it is cited by the International Holocaust Remembrance Alliance (IHRA) as an example of how modern antisemitism manifests itself.

Traditionally, anti-Jewish sentiment was expressed by denying that Jews as individuals had rights, but today much of antisemitism masquerades itself behind the thin veneer of “anti-Zionism,” which is the denial of the Jewish People’s right to self-government in their own historic, ancient homeland.

As the IHRA working definition puts it, “Denying the Jewish people their right to self-determination, e.g., by claiming that the existence of a State of Israel is a racist endeavour” is an example of antisemitism.

It is therefore hardly surprising that this definition of antisemitism – which also spells out explicitly that “criticism of Israel similar to that leveled against any other country cannot be regarded as antisemitic” – has become widely accepted, including by dozens of countries around the world, by the Government of Canada, as well as multiple provinces and municipalities across the country.

Ayyash, while claiming to want “truth and justice” in Canadian post-secondary institutions, unsurprisingly takes issue with the visit in September of a delegation of Canadian university executives, claiming that their visit a demonstrates their complicity “with apartheid and settler colonialism.”

With this statement, Ayyash demonstrates a deep-seated insecurity about the failure of the anti-Israel disinformation campaign to convince Canadian universities that the Jewish State is guilty of what its detractors claim it is, suggesting that for all his platitudes about seeking to make Canadian universities more open to the Palestinian narrative, in reality, he is looking to simply shut out the Jewish experience.

Fortunately, Canadian universities are tuning voices like Ayyash out, as they should.