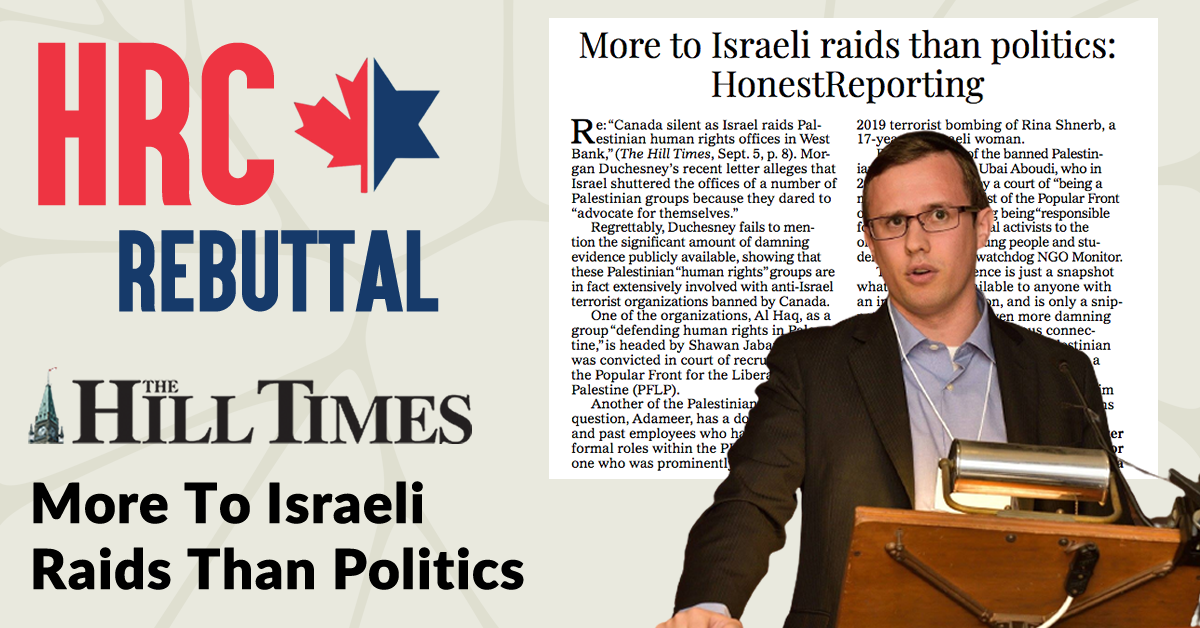 In a recent September 5 letter in The Hill Times, Morgan Duchesney made a number of unsubstantiated claims, including his condemning Israel’s recent action to classify a group of Palestinian organizations as terrorist groups, accusing the Jewish State of taking this action because they dared to “advocate for themselves.”

In reality, these Palestinian groups have clear and repeated connections to terrorism, specifically, the Popular Front for the Liberation of Palestine (PFLP), a banned terrorist organization in Canada. A great deal of evidence against these groups is publicly-accessible, and does not require simply believing Israel’s accusations.

On September 7th, our Assistant Director, Robert Walker, was granted space in the Times to rebut these false allegations.

Duchesney’s recent letter alleges that Israel shuttered the offices of a number of Palestinian groups because they dared to “advocate for themselves.”

One of the organizations, Al Haq, as a group “defending human rights in Palestine,” is headed by Shawan Jabarin, who was convicted in court of recruiting for the Popular Front for the Liberation of Palestine (PFLP). 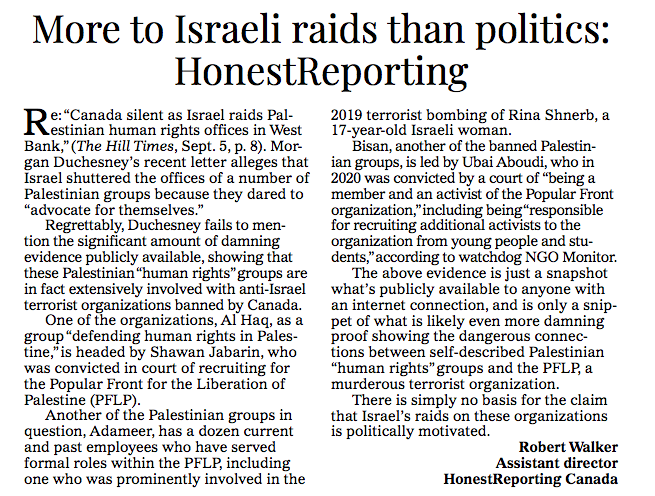 Another of the Palestinian groups in question, Adameer, has a dozen current and past employees who have served formal roles within the PFLP, including one who was prominently involved in the 2019 terrorist bombing of Rina Shnerb, a 17-year-old Israeli woman.

Bisan, another of the banned Palestinian groups, is led by Ubai Aboudi, who in 2020 was convicted by a court of “being a member and an activist of the Popular Front organization,” including being “responsible for recruiting additional activists to the organization from young people and students,” according to watchdog NGO Monitor.

The above evidence is just a snapshot what’s publicly available to anyone with an internet connection, and is only a snippet of what is likely even more damning proof showing the dangerous connections between self-described Palestinian “human rights” groups and the PFLP, a murderous terrorist organization.

There is simply no basis for the claim that Israel’s raids on these organizations is politically motivated.