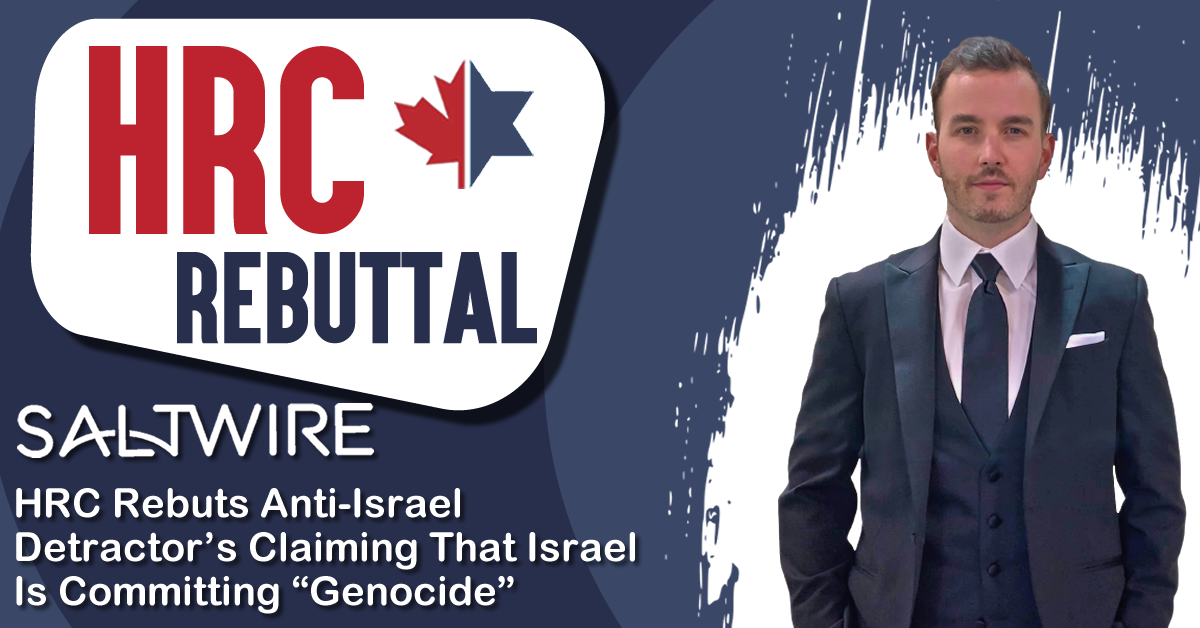 In a May 27 letter to Saltwire (Uneven coverage of humanitarian causes), writer Richard Deaton makes a number of accusations against both the Israeli Government and the Israel Defense Force; both of which are rife with inaccuracies and falsehoods.

First, Mr. Deaton accuses Israel of expansionist policies, “directed against the Palestinians (that) appear to be a coordinated policy of apartheid and genocide”. However, there is no evidence to be found that proves this accusation true; in fact, the opposite of this allegation is reality.

According to the United Nations Convention on the Prevention and Punishment of the Crime of Genocide, genocide refers to “acts committed with intent to destroy, in whole or in part, a national, ethnical, racial or religious group…”

However, an updated 2018 report by the Palestinian Central Bureau of Statistics found that the Palestinian population in the West Bank and Gaza Strip had increased by a whopping 27 percent. This is NOT what genocide looks like and this allegation serves to spread the false accusation that Jews, who were once the victims, are now the victimizers. As well, the rights of Israeli Arabs are so comprehensive and protected, that to accuse Israel of apartheid is simply misinformation and libel.

Secondly, the claim that Al Jazeera journalist, Shireen Abu Akleh was killed by an IDF Sniper is simply unfounded. The truth of the matter is that the exact circumstances of her death are not clear. We simply do not know who shot the bullet, and which gun it came from.

Israel made the offer of a joint investigation with the Palestinian Authority (PA) that included a ballistic analysis of the bullet that killed her, but this offer was quickly rejected by the Palestinian regime.

Furthermore, the claim that Israeli soldiers are purposely killing journalists is fallacious. According to the New York-based Committee to Protect Journalists (CPJ), the group does not assign any responsibility for journalist deaths to Israelis, it simply says they were killed in crossfires or while on a dangerous assignment.

Finally, if Richard Deaton wants to find deliberate abuse, intimidation, and murder, in the region, he needs to look no further than Hamas, a designated terror organization by the Canadian Government, which controls the Gaza Strip. Hamas, not only uses children as human shields, committing countless war crimes against its own people, but they also terrorize and murder as many innocent Israelis as possible, and celebrate in the streets with treats after these attacks. Israel, on the other hand, does as much as possible to ensure the safety of innocent Palestinians when engaging in military operations in the West Bank and Gaza Strip, which includes phone calls and warning strikes.

If Mr. Deaton is looking to condemn anyone, it should be Hamas, the Islamic Jihad, ISIS, and other Palestinian terror organizations, whose sole purpose is to destroy as many innocent Israeli lives as possible and annihilate Jews from Israel, which has been their ancestral homeland for over 3,000 years.

How Visiting Poland with a Holocaust Survivor Can...