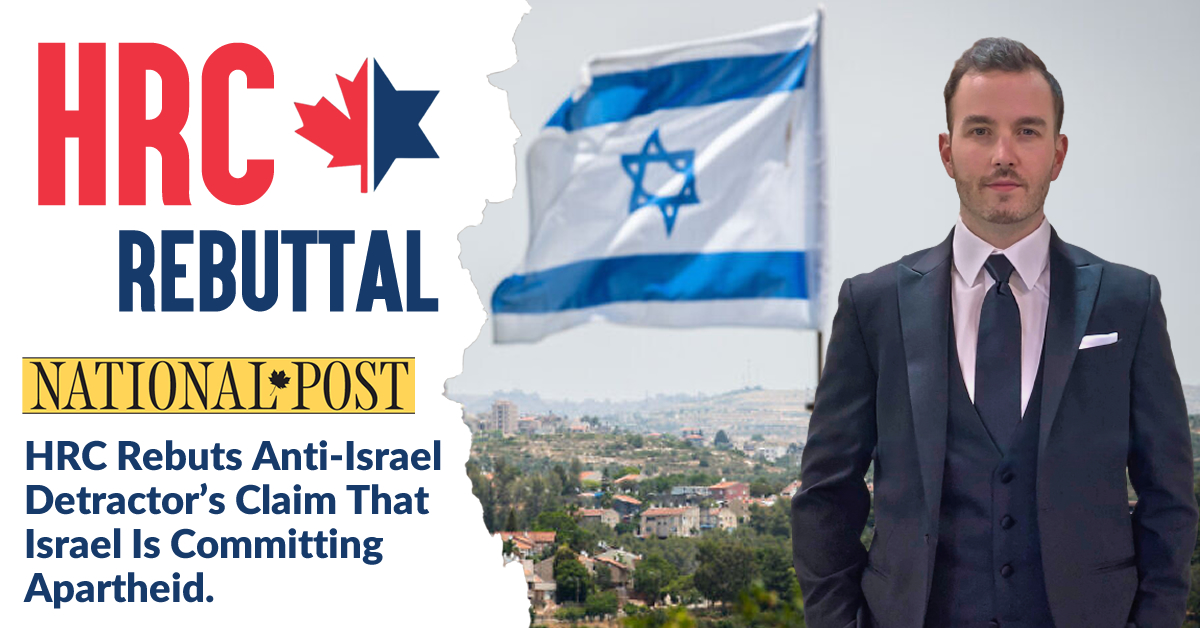 In an August 5th letter to The National Post, writer Rafael Silver, from the anti-Israel organization Independent Jewish Voices, made a number of unsubstantiated claims accusing the State of Israel of committing “apartheid” against the Palestinians.

On October 13, our Digital Director, Rick Firth, was granted space in the Post to rebut the “apartheid” libel and to counter this letter writer’s spurious allegations.

International law defines “apartheid” as “establishing and maintaining an institutionalized regime of oppression by one racial group over another.” This is literally the opposite of Israel’s ethos as a free democratic society. Israel is a multicultural and diverse country, with equal rights for ALL citizens, no matter race, religion, or sexual orientation. 21 % of Israel’s population is Arab, the Knesset (Israeli parliament) has an Arab party which represents Arabs across Israel. Furthermore, Arabs serve in the IDF, sits on The Supreme Court, and are at the pinnacle of Israeli society, whether as titans in business, CEO’s of banks, chief surgeons, and more.

Palestinian-Arabs who live in the “West Bank” are free to vote for their own leadership (though the Palestinian Authority has not held a presidential election since 2005), and those who live in Gaza have been under the control of Hamas, a designated terror organization in Canada. Israel has attempted peace with the Palestinian leadership multiple times, over many decades, with every single offer being refused.

That being said, any security barriers that Israel has in place between the “West Bank”, Gaza and Israel has always been about one thing only: protecting the lives of all Israelis; Jews, Muslims and Christians alike, from continual Palestinian terrorist attacks.

As Rhoda Kadalie, former Commissioner at the South African Human Rights Commission (she was appointed by Nelson Mandela) said, “Few of those who suffered from apartheid directly have bought into [the apartheid analogy]… racism and discrimination do not form the rationale for Israel’s policies and actions… Israel respects freedom of speech and human rights”.

If you want to talk about “Apartheid”, look at Israel’s neighbouring Arab and Muslim countries where more than 850,000 Jews were ethnically cleansed from their homes in Egypt, Lebanon, Syria, Iraq, Yemen, Libya, Morocco, among others since 1948. 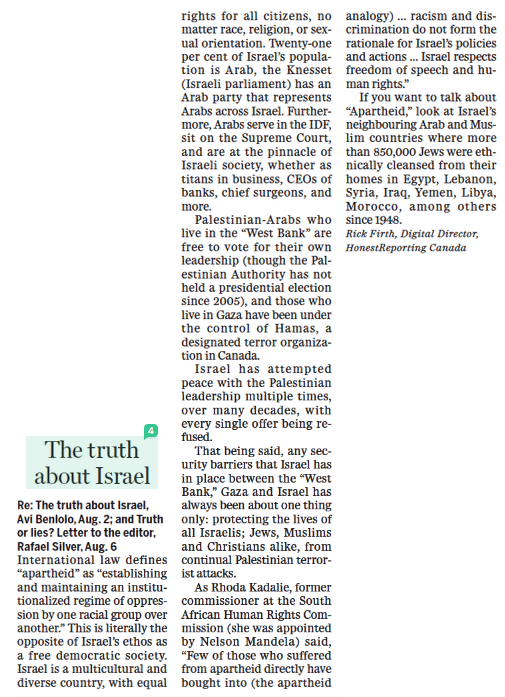