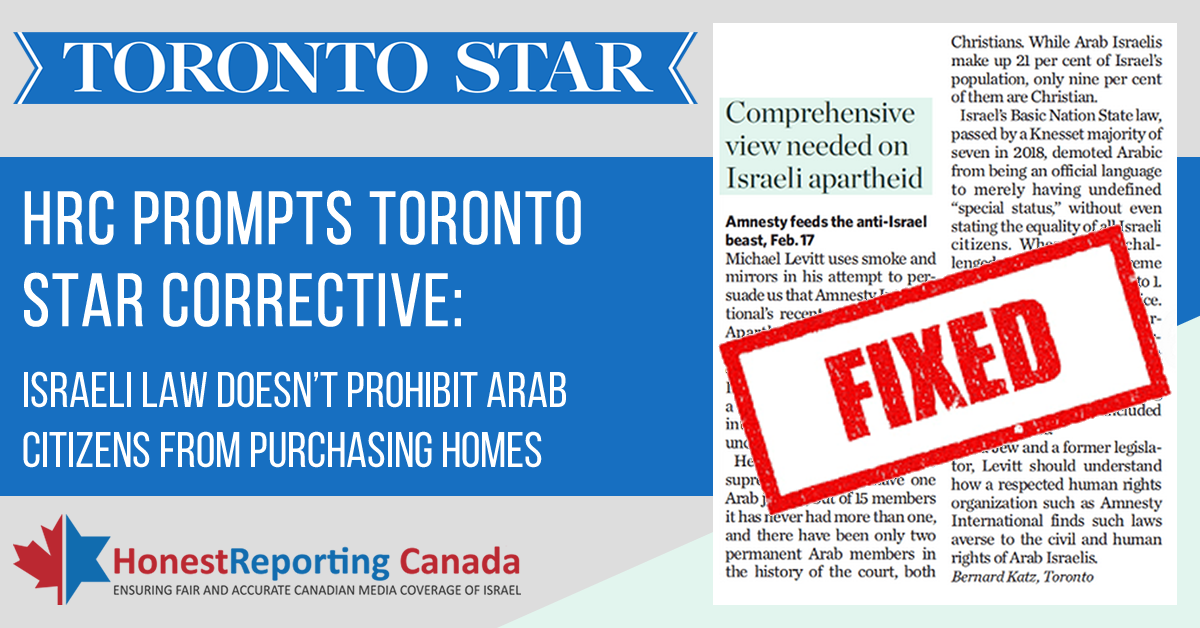 On February 24, the Toronto Star published a letter to the editor by Bernard Katz, an anti-Israel detractor, who falsely claimed “Other Israeli laws exclude Arab citizens from home purchases in certain areas.” 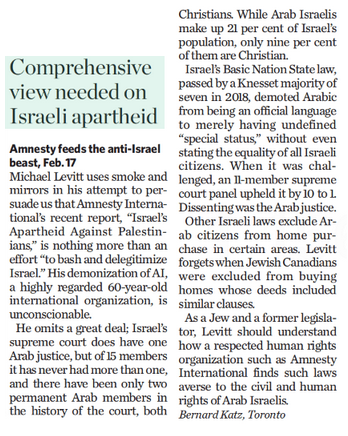 We asked the Star to substantiate this claim and to point to the alleged law to confirm the veracity of this matter. Failing which, we said that it’s incumbent upon the Star to issue a correction as even letters to the editor must be factually accurate.

In response to our complaint, Mr. Katz was asked to provide sources to substantiate his statement, and he referred to the “Admissions Committees Law, which he said allows small communities to reject potential residents based on ‘incompatibility with the social-cultural fabric of the town.’”

He claimed that human rights groups raised concerns that the law, which, for the record, has a non-discrimination clause in it, is being used to deny residency to those not deemed acceptable to the local admissions committee, including Arabs.

However, as we told the Toronto Star, this doesn’t even remotely substantiate that there is an Israeli law on the books that excludes Arab citizens from home purchases in certain areas.

Could discrimination occur, well, that’s always a possibility, whether here in Canada or in Israel, but we are talking about the law. There is no such law in Israel.

Mr. Katz claimed that this is an interpretation made by “human rights groups” of a rather benign statement of law to buttress his argument, but this does not confirm the veracity of this matter, not one iota. Laws of this nature have to be explicit. This statement could equally be interpreted to apply to people who are not of a level of religious observance in Judaism or age perhaps, think of retirement home age limits for example.

The fact that the law includes a non-discrimination clause only further validated our complaint.

Upon further evaluation, The Toronto Star edited the letter to clarify that Mr. Katz is expressing his opinion and that view of several human rights organizations on the point in question.

A clarification note was added to the letter which says the following:

Clarification – March 11, 2022: This letter was edited to clarify that it’s the author’s opinion and that of several human rights organizations that Arabs could be excluded from land purchases in certain areas because of Israeli laws. A previous version stated that Israeli laws exclude Arab citizens from home purchase in certain areas.

While we appreciate the steps taken by the Star to set the record straight, we are of the view that a correction is warranted, not a clarification, as Mr. Katz made a factual error and the Star published it.

We believe that the Star’s notice must state outright that there is no Israeli law that denies Arab citizens the ability to purchase homes in any areas of Israel.

HonestReporting Canada has conveyed these concerns directly to the Toronto Star. Stay tuned to this page for future updates.