In a January 20 article on Prime Minister Harper’s trip to Israel, Toronto Star columnist Chantal Hebert referred to Tel Aviv as if it were the capital of Israel. She wrote “As Harper tours Israel, the United States is seeking a diplomatic resolution to the issue of Iran’s nuclear ambitions in the face of vocal resistance from Tel Aviv.”

HRC board member Robert Sarner contacted the Toronto Star about this error by stating the following:

“It’s hard to imagine that your copy editors do not know that Jerusalem is the capital of Israel, home to the country’s Knesset (parliament), almost all government ministries, the official office and residence of the Prime Minister and the President, the Supreme Court and scores of other national institutions and organizations.

It may disturb some people that Israel, like every other country in the world, long ago decided where it would situate its capital. Some people may not like it that Israel chose Jerusalem as its capital and countries may choose not to locate their embassies there. But journalists have no right to substitute the name of another city (such as Tel Aviv) for that of Jerusalem when referring to Israel and its leadership and government. In so doing, writers turn their backs on an incontrovertible fact — Jerusalem (with or without the contested eastern part of the city) is the capital of Israel.

In their insidious disregard for the facts and to lay claim to Jerusalem, the Arab/Islamic world media and various left wing organs have long referred to Tel Aviv as Israel’s capital, as if by doing so, it would somehow weaken people’s visceral association of Israel with Jerusalem.

Bottom line: Misinformation should have no place in a quality newspaper like the Toronto Star where one still expects facts to rule the day.”

After which, the Toronto Star issued the following correction on January 24: 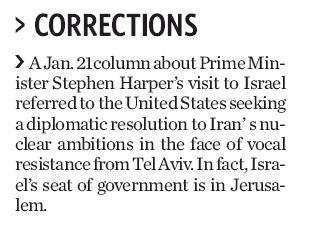