Today, the Toronto Star published the following two clarification notices after HRC notified the Star that in back-to-back editions on December 28/29, their editors had falsely claimed that Israel supports a “one-state solution” and that it had built “more settlements” in recent years: 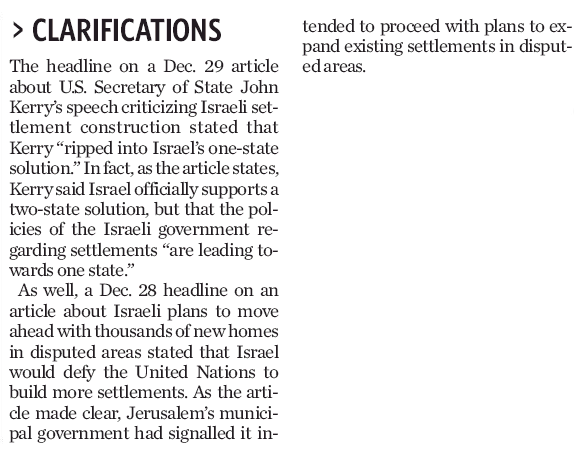 On December 28, the Star published a New York Times article with a headline that erroneously claimed that: “Israel to defy UN, build more settlements”

Contrary to this headline given by Star editors, Israel has only approved the building of new homes within existing settlements, they have not vowed to build “more settlements”, there is a stark difference. The lead of this article confirms the veracity of this, as does a body paragraph which says: “The city intends to approve 600 housing units in the predominantly Palestinian eastern section of the town Wednesday, in what a top official called a first installment of 5,600 new homes.”

Additionally, on December 29, the Star published an Associated Press report to its front page with a headline which falsely claimed that: “Kerry rips into Israel’s one-state solution: “It won’t ever be at peace” 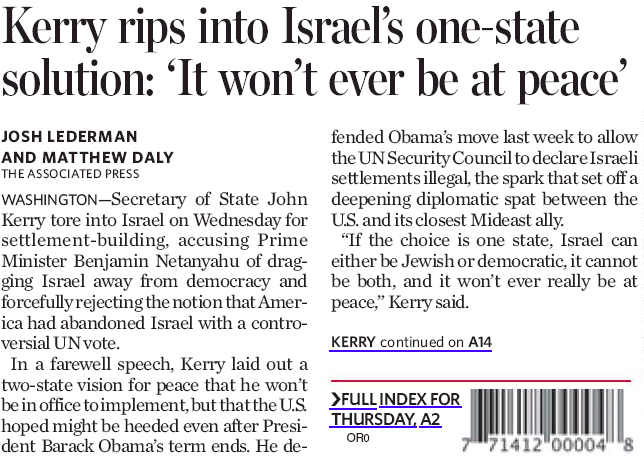 Israel doesn’t support a “one-state solution” as this headline erroneously claims. Instead, Israel supports a two-state solution. John Kerry only said that “If the choice is one state, Israel can either be Jewish or democratic, it cannot be both, and it won’t ever really be at peace…” The article then quoted Kerry saying: “The settler agenda is defining the future of Israel. And their stated purpose is clear: They believe in one state.”

Israel supports a two states for two peoples formula to end the conflict, while Kerry only claimed that the “settler agenda” believes in “one state”.

HonestReporting Canada thanks the Toronto Star for promptly and professionally issuing these clarification notices to set the record straight.