Fakhrizadeh Killing Proves IDF Most Moral Army, HRC...
WATCH: Iran and the Taliban: Two Birds of...
What the media missed in its coverage of...
Combating Antisemitism In The Media: HRC Interviewed By...
Sheridan College Professor Engages in Hate By Dehumanizing...
Unmasking Iran’s Global Ambitions with Guest Meir Javedanfar...
Shemittah: One Of Many Arrows In The Quiver...
The Inside Story On Israel’s Losing Battle With...
The Media’s Double Standards in Covering Palestinian Casualties...
Canadian Journalists Who Criticized Israel Fail To Speak...
Home Media Action Alerts2015 HRC Prompts Toronto Star Clarification Over Misleading Gaza Blockade Article 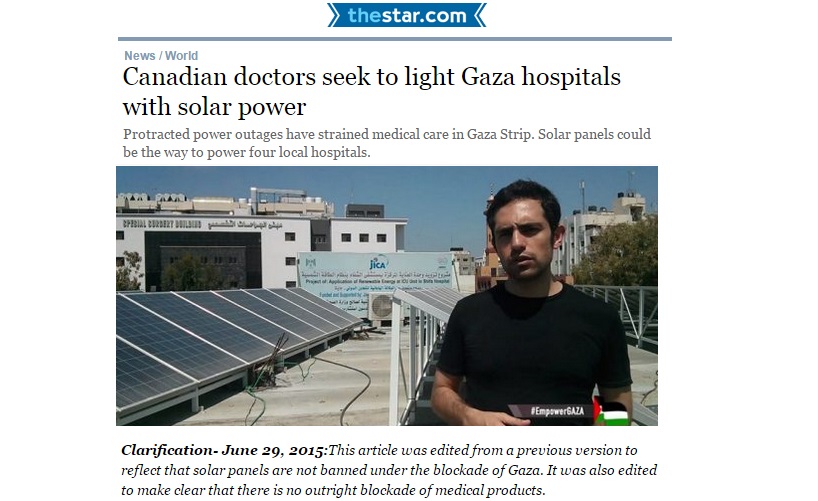 The article was misleading as it strongly implied that Israel does not allow solar panels into Gaza and that there’s a blockade of medical products going into Gaza. Both claims are fallacious.

Solar panels have been shipped into Gaza through Israel for years and is not banned under the Egypt/Israel blockade of the Hamas-run Gaza Strip. Indeed, many UNDP solar-power projects are in place and Gaza homeowners have been importing solar panels for many years. Importantly, Gaza’s Shifa Hospital already has a system of solar panels.

The lead paragraph of this article had stated: “One of the most difficult things about being a doctor in the Gaza Strip is the uncertainty. With protracted power outages and a crippling blockade cutting off access to medical supplies, even the most basic procedures can become a race against the clock.”

While the body paragraphs stated:

“Israel and Egypt maintain a blockade of the Gaza Strip, controlling the movement of all people and goods in and out of the territory. Palestinians are also barred from importing construction materials and many other supplies into Gaza, a measure Israel justifies on the basis of security.

While Israel gradually introduced stricter restrictions on the occupied Palestinian territories in the early 1990s, Gaza has been under a blockade since 2007, when Palestinian faction Hamas took power after winning parliamentary elections.

Without a lifting of the blockade, and improvements to the health, water, electricity and education sectors, the UN estimates thatGaza will become uninhabitable for its 1.8 million residents by 2020.”

In total, there were five mentions of the “blockade” which doesn’t block solar panels from entering Gaza and the claim that medical supplies are affected by restrictions on dual-use goods via the blockade (materials which can be refashioned for the use in terrorism) is a complete falsity. There is not, nor has there ever been, any restrictions on the entry of medical supplies into Gaza.

The true reasons for the permanent and already existing shortage of medical supplies in Gaza are explained fully here. They include:

COGAT (Coordinator of Government Activities in the Territories), a unit of the Israeli Ministry of Defense, works to facilitate the transfer of medication and medical supplies both through the international community and the private sector, however shortages remain.

Aside from the Star article’s failure to lay blame with Hamas for its inability to run Gaza and its electrical infrastructure, capacities, and institutions (which the Palestinian Authority shares equal blame), this article did a disservice to Star readers by only referring to Hamas as a “Palestinian faction… (that) took power after winning parliamentary elections.” As we told Toronto Star editors, it’s only fair to acknowledge that they are a recognized terror group under Canadian law which is why this blockade is in place.

As this was an online article, we requested that this report be amended and clarified in the interests of fairness and accuracy. We are pleased to report that subsequent to HRC’s intervention, the following clarification notice was issued by the Star:

As well, the Star included the following statement into this article: “Hamas has been designated a terrorist organization by Canada and several other countries.”