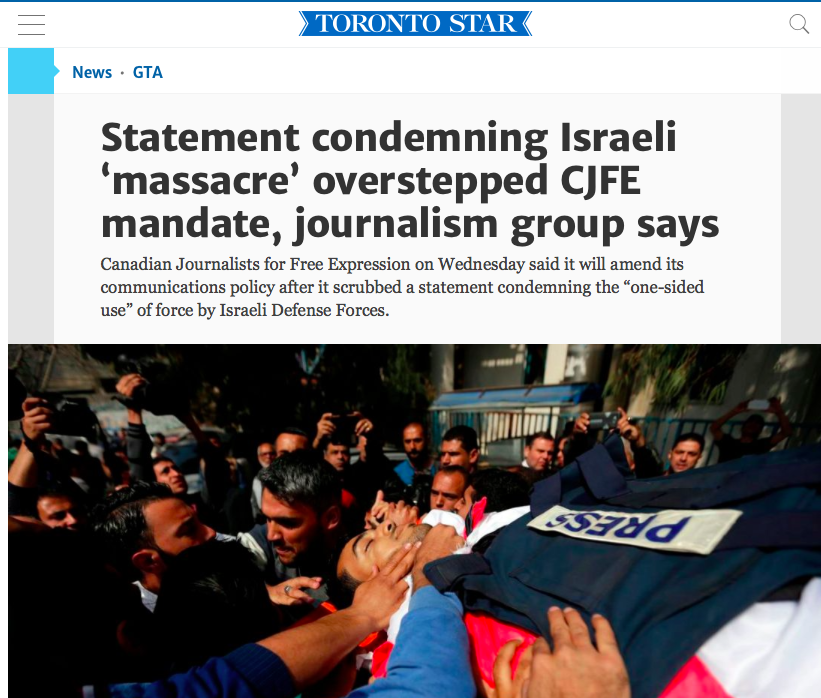 On April 11, the Toronto Star featured an article by staff reporter Tamar Harris who in referring to the recent protests and riots along Israel’s border with Gaza, made the following serious error:

Twenty-six protesters have been killed and hundreds wounded, including journalists, since the protests began March 3.”

There’s no foundation to the Star’s claiming that all of the Palestinian deaths were “protestors”. In fact, as the Jerusalem Post reports:

A report by the Meir Amit Intelligence and Terrorism Information Center said that 26 of the 32 Palestinians killed were connected to terror organizations.”

Accordingly, it’s been reported that 80% of Palestinians killed in the Gaza border riots were terrorists. The Jerusalem Post says:

On March 31, Israel said that 10 of the 15 Palestinians killed at the time were terrorists. Even Hamas admitted that 5 of the dead were its members.

In light of this information, we contacted the Toronto Star asking it to correct its falsely claiming that Israel killed 26 Palestinian “protesters”. As we told the Star’s editors, Israel and Israeli organizations say that many of these dead were engaged in violent riots, had attacked IDF soldiers and had tried to infiltrate into Israel and were bonafide terrorists.

On April 17, the Toronto Star published the following “clarification” notice in response to our complaint: 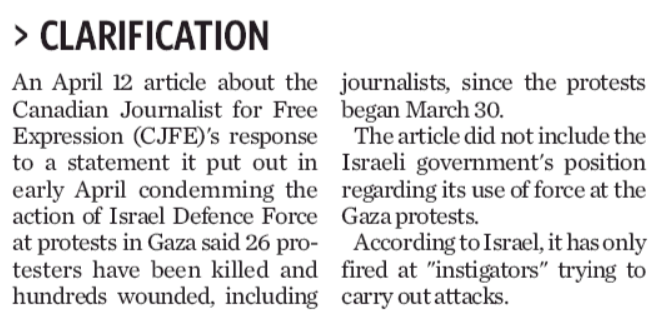 While HonestReporting Canada welcomes the fact that the Star has now included the Israeli government’s position that it claims it only fired on instigators who were carrying out attacks, the Star has not retracted its falsely claiming as fact that Israel killed 26 Palestinian “protestors”. To reiterate, Israel claims that the majority of the casualties were terrorists, many of whom engaged in violent riots and terror attacks.

The Star also amended its online article which now states the following:

“Twenty-six protesters have been killed and hundreds wounded, including journalists, since the protests began March 30. Israeli troops are closely guarding a border fence in the area and has warned it will not tolerate attempts to breach it. Israel says it has only fired at “instigators” trying to carry out attacks.”

While we appreciate the Star’s responsiveness to our concerns, we find the efforts undertaken to remedy this serious error to be far from satisfactory and not inline with journalistic standards for accountability.