Speaking truth to power, HRC prompted the Globe and Mail today to issue the following clarification notice (see below) for falsely claiming in an October 16 editorial that Hamas didn’t take part in recent terror attacks against Israelis. 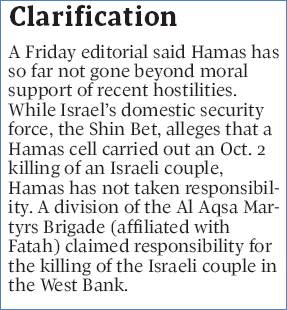 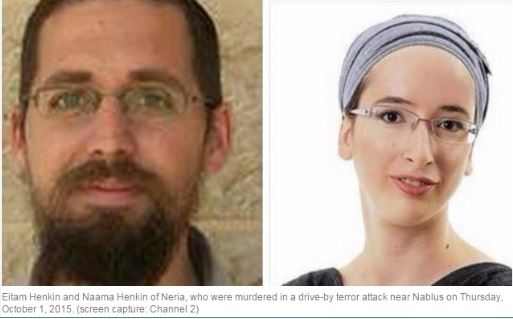 The Globe’s editorial – which represents the official viewpoint of the newspaper – had erroneously claimed that “Mercifully, or prudently, Hamas has so far not gone beyond moral support” of recent hostilities. Hamas: merciful, prudent, and moral, and all in the same sentence from Canada’s so-called paper-of-record?

In fact, Hamas confessed to carrying out a recent drive-by shooting attack in the west bank that saw a Hamas cell composed of five terrorists brutally murder an Israeli mother and father, Eitam and Naama Henkin (pictured), in front of their four now orphaned children.

Regretfully, this clarification notice a) failed to retract the Globe’s erroneous claim altogether and b) acknowledge that Hamas itself confessed to the attacks.

pointed out this fact, while the Globe elected to present this matter as an Israeli claim only though Israel has forensic evidence and confessions from the Hamas terrorists themselves. Not only does Hamas condone this barbaric violence on innocents, they confessed to having carried out this terror attack in cold blood, while Mahmoud Abbas’ Fatah party only claimed responsibility for the attack,

From our persepective, that the Globe did not issue a proper straight forward retraction notice to set the record straight shows its poor commitment to journalistic accountability.

As well, in this same editorial, the Globe somehow managed to refer to Israel’s current prime minister as being Ariel Sharon, the former and now deceased prime minister of Israel. In fact, Benjamin Netanyahu is Israel’s Prime Minister. Here’s the editor’s note issued after HRC’s complaint: